A Millennium Of Sri Ramanuja, A Guiding Light On Spiritual Harmony 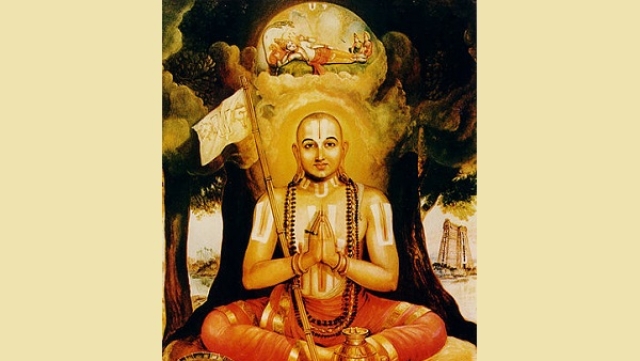 Aditya Parasri, a highly learned Dalit devotee, was given a reverential welcome at the Chilkur Balaji temple in Hyderabad recently, when the head priest Sri Rangarajan carried him on his shoulders into the sanctum sanctorum. The procession was accompanied by nadhaswaram, Vedic chanting and singing of Annamacharya’s Brahmam Okate (‘the Divine is One’). Sri Rangarajan said this was done to send a clear message of social harmony at a time when social fault lines were strained. While this is a welcome move today, what makes it truly remarkable is the fact that Sri Rangarajan was re-enacting an incident that happened in the life of saint Thiruppaan Azhwar over two millennia ago.

On the banks of the river Cauvery, Thiruppaan Azhwar was born into the Paanar community, one of musicians who were traditionally considered outcasts. As such, they could not even touch certain parts of the Cauvery, let alone visit the temple of Ranganatha at Srirangam, which lay on an island of the river. Despite that, Thiruppaan Azhwar grew up as an ardent devotee of Ranganatha, one who could send listeners to intense devotional states with his singing and his veena. Often, he would be lost in states of mystic rapture on the banks of the river.

During one such time, Lokasaranga Muni, the archaka of Srirangam temple, was carrying water for Ranganatha and found Thiruppaan Azhwar, an untouchable, blocking his way. As words failed to penetrate his mystic rapture, the archaka threw a stone, which hit Thiruppaan Azhwar on the head, drawing blood. The Azhwar quietly moved away, saying nothing. However, on reaching Srirangam, the archaka found the doors of the temple locked, denying him entry. The Sri Vaishnava lore says Ranganatha commanded him to fetch Thiruppaan Azhwar on his shoulders into the sanctum sanctorum to atone for his grievous act. On getting the darshan (sight) of Sri Ranganatha, Thiruppaan Azhwar is said to have merged with the Lord. He is revered as one of the 12 Azhwar saints of the Sri Vaishnava tradition and his hymns are sung in temples across South India.

To this day, this story is celebrated and re-enacted every year in a festival called “Munivahana Seva”. It is this tradition that Sri Rangarajan revisited to heal the wounds of today.

The Sri Vaishnava tradition is replete with many such stories and systems that have been institutionalised to ensure that every single person, without any barriers of jati (caste) or gender must be given access to the divine. Sri Ramanuja in his own life exemplified this tradition and carried it forward in many ways. One such well-known episode in his life, was when, after being turned back 18 times, his guru initiated him into the Narayana Mantra. Sri Ramanuja was explicitly warned that this was the secret of secrets and was sure to lead to mukti (liberation) and not to be shared. However, in his infinite compassion, he gathered the people of the town, climbed up the temple tower, and promised initiation into the mantra for all without any distinction. This universal spirit became an integral part of the Sri Vaishnava tradition.

With this act, Sri Ramanuja fundamentally changed the criterion for initiation: anyone who genuinely seeks must be initiated. Even today, any person regardless of jati, gender, or even nationality can receive initiation into the liberating mantras of the Sri Vaishnava tradition.

During his stay in Melkote, Sri Ramanuja reached out to the outcasts of the region, who were brimming with bhakti (devotion), addressing them affectionately as “Tirukkulathor”, which roughly translates to “people of the Divine”. At a time of a far more rigid social stratification, Sri Ramanuja established temple administration norms that ensured that Tirukkulathors got entry into temples during festival times.

Most prominent Vishnu temples in south India broadly follow the temple administration norms set by Sri Ramanuja. He institutionalised certain procedures that serve as powerful symbols. Those who have visited a Vishnu temple in the south would be familiar with the process of getting tirtha (sacred water) followed by shatari, a crown with a pair of sandals on top, being placed on the head of the devotee. The shatari represents Nammazhwar, who was born an outcast. He is one of the 12 Azhwars too, and the entire tradition traces its parampara (lineage) back to Nammazhwar. In fact, Sri Ramanuja considered himself to be the sandals of Nammazhwar’s feet.

To this day, in every temple, it is Nammazhwar that graces the head of the devotees and blesses and paves the way to mukti for Brahmins and outcasts alike.

Nammazhwar is revered to the extent that the 1,000 verses composed by him are considered to be the very soul of the Vedas. It is through the light of his verses that the Sri Vaishnava tradition interprets the true essence of the Vedas. The Divya Prabhandam, the collection of 4,000 verses sung by the 12 Azhwars in Tamil is considered the Dravida Veda, equal in stature to the Sanskrit Veda, and sweeter, as it overflows with unalloyed love for the divine.

The Vaishnava tradition is therefore Ubhayavedanta, the tradition of two Vedantas – Sanskrit and Tamil, the two eyes through which the divine can be seen. In every aspect of religious life, both the Dravida and Samskrita Veda are chanted. In fact, Ramanuja ensured that in every temple procession, the Dravida Veda goes ahead of the deity and the Sanskrit Veda follows behind. Thus, the tradition is a double-helix where Sanskrit and Tamil are intricately, reverentially, and inseparably interwoven. At a time today when narratives pit one against the other, this spirit, where one is incomplete without the other, is particularly worth remembering and reviving.

The traditional default surnames for the four varnas are Sharma for Brahmana, Varma for Kshatriya, Gupta for Vaishya, and Dasa for Shudra. One of the pioneering works of Ramanuja is naming during initiation into the Sri Vaishnava sampradaya (tradition). Every person, irrespective of their jati or varna would be given the Dasa name, for in the ultimate scheme of things, everyone irrespective of birth is a Dasa of the divine. This spirit of Dasya finds expression in seemingly simple things like the protocol for greeting a fellow devotee. The first person uses his name followed by “Adiyen”, which means “your servant” and suffixed by Dasan, not his surname. In this and so many other everyday practices, the acharyas wove the principles of egalitarianism to ensure that people understand the appropriate relation to each other and to the divine.

In his early life, Sri Ramanuja came in contact with Kanchipurna, a great devotee who was born into a low caste. Ramanuja held him in very high esteem and revered him as his guru. Legend has it that Kanchipurna could converse with Narayana himself. In fact, Sri Ramanuja is considered to have received answers to six questions foundational to his philosophy of Vishishtadvaita from the divine through Kanchipurna. Desiring to serve Kanchipurna, Ramanuja persuaded him to visit his house for a meal. Unfortunately, Kanchipurna arrived when Ramanuja was not at home. His wife, who considered him to be of a low caste, served him food outside and washed the space where he sat. When Ramanuja returned, he was outraged at the way in which a devotee of the lord was treated and ran to Kanchipurna begging for forgiveness. Tradition also narrates this as one of the main causes for Ramanuja to leave his married life and adopt sannyasa.

At the end of a millennium of Sri Ramanuja, we must continue to celebrate him by taking forward his spirit of dharmic spiritual harmony between different groups in society in our own lives. It is time that we recognise centuries of pain and suffering caused to some sections of society that continue in some form or the other even today. It is time that we actively came forward to heal social fault lines by creatively drawing upon the examples and teachings of acharyas. Sri Rangarajan has set a stellar example of how we can do this. We need many more such initiatives across the country involving every section of society. These stories from the lives of our gurus must be told and retold to reinforce this vision of inclusivity and harmony.

For, as the Vaishnava devotees would famously tell us, and countless incidents in collective memory would remind us, the divine tolerates disrespectful behaviour towards him, but never forgives disrespect directed to a devotee. Ultimately, our devotion must manifest this spirit in society.

Also Read: Thousand Years On, India Is Still Discovering The Man That Was Sri Ramanuja