Seven Thousand Wonders Of India: A Feat Beneath The Ground In Ellora, Called Kailasanatha 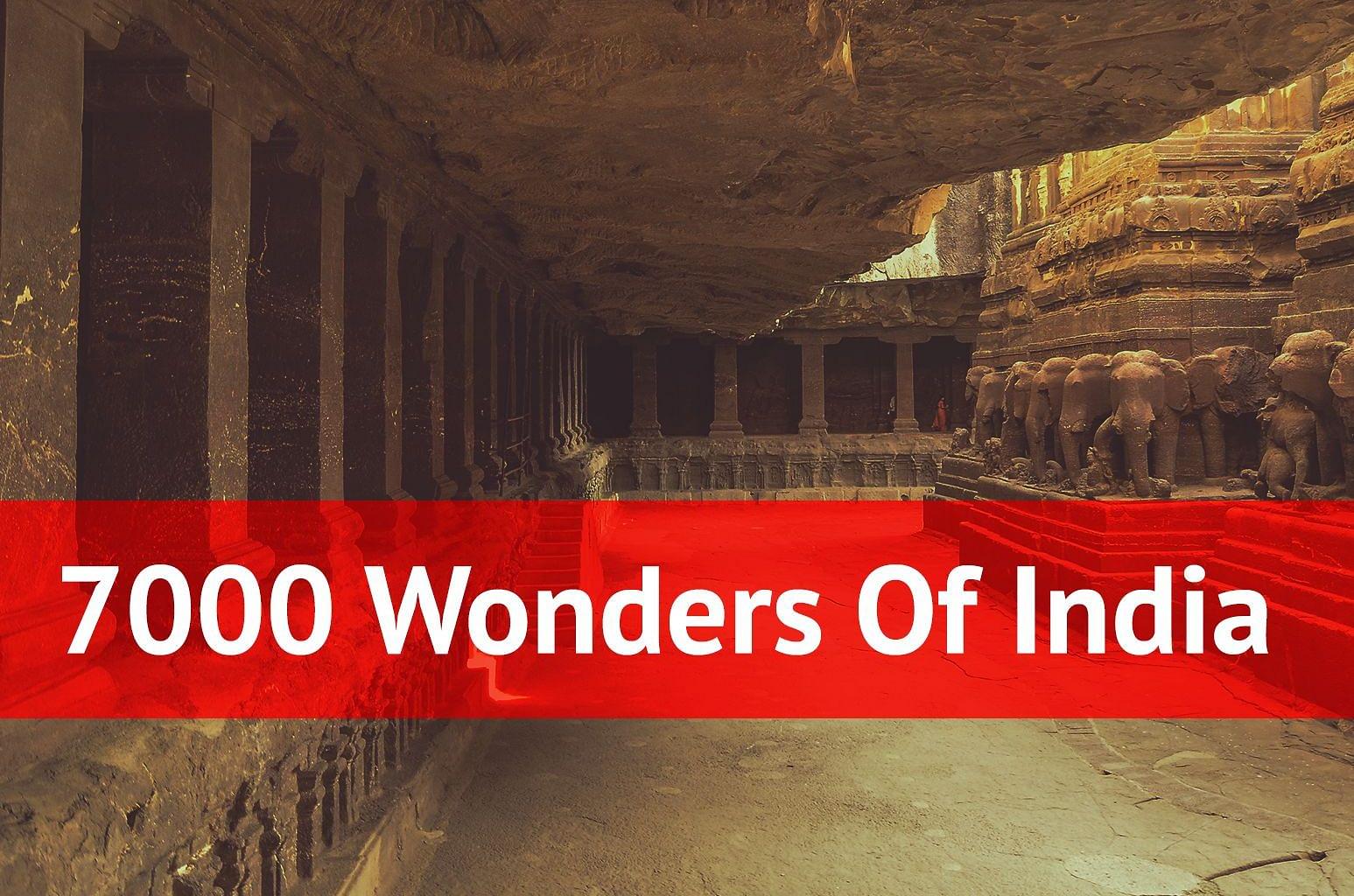 The grandest temples built by almost every royal dynasty in India is in their capital city — Except the Rashtrakutas.

Their capital was Manyakheta; their grandest temple is in Ellora.

In every other temple, art and beauty dull the viewers’ sense of awe, at the engineering, logistics, audacity and willpower of the minds behind it.

Ellora allows no such scope. No surprise that some petty minds have attributed it to ancient aliens. Could mere mortal men with hammer and chisel, sculpt away a mountain to present a temple?

Local legend has it that even its own builders could scarcely believe they had built the temple, and murmured that surely gandharvas and yakshas had helped them when they were not looking.

It is, perhaps, no coincidence that its patron, the Rashtrakuta King Krishna I, shares the name of the Govardhana Giridhari.

Another legend has it that the queen mother went on a fast that she swore to end only when the kalasa of the temple was completed; the sthapathi therefore, sculpted that kalasa first, to save her life, and also built the temple top-down rather than bottoms-up.

One small story for a queen mother, one giant leap for architecture.

Unlike Kanchipuram or Pattadakkal, there are no inscriptions in this temple.

The tri-tala Dravida vimana (read here), with an octagonal Dravida shikhara, comparable to the Pallava Dharmaraja ratha monolith in Mahabalipuram, the Pandya Vettuvankoil monolith in Kazhugumalai, and Chalukya Mallikarjuna temple in Pattadakkal; kosthas in the paada, kutas and shaalas in the vimana, leave us no doubt.

The garbhagruham is surrounded by an open circumambulatory passage, punctuated by five parivaara shrines, three of which have octagonal Dravida shikharas, and the other two wagon-shaped shaalaakaara shikharas.

A sukhanasi, which spans the antarala/ardha-mandapa fronts the main vimana.

A marvellous set of four roaring lions tops the massively pillared sabha-mandapa. The body of the lions point in the cardinal directions, while the faces are turned towards the sub-directions.

The sabha mandapa has spacious porticos on north and south, and a large covered one at the entrance. This leads forward to a nandi mandapa, with a magnificent Nandi facing his master.

Porticos in the sabha-mandapa are clearly a continuation of Chalukyan architecture; they are also a feature of the Maaru-Gurjara category of Nagari architecture — the most famous examples of these are in Khajuraho.

Staircases fall away on either side of the sabha-mandapa entrance. Yes! – the whole temple is designed as a two-storey structure. The adishtaana is the lower floor, above a upapitha featuring majestic elephants, symbolically bearing the weight of the temple.

The remnant walls of the hill serve both as a praakaara wall and as an intermittent maalika of different shrines, in one, two, or three floors. These include:

· A mandapa for Ganga, Yamuna, Sarasvati.

· A chitra mandapa on the first floor, in the northern wall, with extremely beautiful sculptures.

· A pillared mandapa in the eastern wall, with various murtis on the back wall.

· A mandapa in the southern wall, with sapta matrika.

· Some unfinished mandapas in the southern wall.

A trishula-stambha and an elephant, stand on either side of the Nandi-mandapa. The front wall is extensively covered with sculptures, both inside and outside, and has a mahadvaara in the middle.

The temple is unfinished, as mysteriously as Mamallapuram (read here) and Vettuvankoil. If it had been completed, internal staircases would have led to half-finished mandapas.

Grammar stutters, adjectives wilt, metaphors go into hiding. How does one control one’s senses, when they are overloaded? Perhaps, that is why there are no inscriptions.

Autographs of sculptors? They chose to depict Bhrigu and Shukra, authors of two ancient shilpa shaastras, instead of themselves.

Sculptures in a temple are usually decorative. Two sculptures of Ravana lifting Kailasa in Ellora, though, are suggestive, and placed strategically.

One is chitraardham, a low-relief sculpture in the upapithaa of northern wall of the sabha-mandapa.

It strongly reminds us of a similar sculpture in Pattadakkal, which is located decoratively in a pillar.

The other is chitram, fully in the round, in the upapitha of the southern wall of the sabha mandapa. His heads in a circle, the enormous burden of lifting the mountain so telling that every face is crying out, his every muscle taut in strain, his hands stretching in every direction, Ravana presents the very picture of limitless hubris and impending humility.

Siva, smiling amusedly, seated nonchalantly, while a troubled Parvati leans on him in confusion.

The two Ravanas are lifting not only the mountain in their sculptures, but also the entire mountain that is the vimanam of the Ellora Kailasanatha temple.

On the first floor of the sabha mandapa are two contrasting sculptures side by side — one of Siva emerging out of the linga built by Markandeya and kicking Yama in his chest; the other of Gangadhara (read here).

But we have hurried inside in eagerness. Let us restart at the entrance.

The front wall of the temple forms a courtyard with the jutting tail-ends of the hill. All three are profusely decorated with various samhara-murtis in the north — Gajasamhara, Narasimha, Trivikrama, BhuVaraha and AshtaDikpalas in the south — all on their vahanas. These sculptures have suffered great damage.

As we enter, we are greeted by the essence of auspiciousness — Gajalakshmi — seated on a lotus, bathed by two elephants upturning pots of water over her, while two more fetch water from the pond filled with lotuses in front.

The whole panel is about 20 feet tall; traces of mortar and paint at the very top indicate that the entire panel was painted — as was perhaps every wall of the top.

There is grandeur in the remaining grayness; there must have been splendour in original colours.

The lotus spread a few feet forward in full three dimensionality, accented by the towering mace-bearing dvarapalakas on either side.

In sharp contrast on the other side, is a ferocious Gajasamhara Murthy, tearing apart the elephant skin which he holds overhead, while one hand holds a bowl for the blood, one hand reassures Devi, one foot rests on several ganas, and Kalabhairava, skeletal and terrifying, dances between his feet.

The inside of the front wall is also as resplendent with giant sculptures as the outside, but far less worn out.

The most arresting sight here is Tripurantaka — Siva astride a chariot, Brahma steering the horses, arching the majestic bow that in a later yuga, the Ikshvaaku prince Rama would string in the court of Janaka.

This is not on one wall, within one kostha, but traverses two walls, as the horses turn a corner, giving us a sense of their speed.

The three floating cities of the eponymous Tripura are shown above to the right.

Equally dynamic is a sculpture of Siva as UrdhvaTandava. Traces of painted designs are visible about this. The joy and exuberance of Siva as he dances with abandon, can be seen in his smile.

Head to toe, his body curves in flowing tribhanga, his left leg almost perfectly balanced in the middle, his right leg bent in balanced grace; his arms flow in every direction in symmetry; a seated gana accompanies him perhaps, attempting to synchronise with Siva’s own damaru.

Narasimha battling Hiranya is another extremely dynamic sculpture, complimenting UrdhvaTandava on the other side of the Nandi mandapa.

Narasimha has locked one hand of the asura, and has gripped his girdle with another hand, ready to lift the asura and slam him on the other side.

Each sculptor, a century apart, has chosen a different pose at a different time in the combat.

Now compare the three depictions of Durga battling Mahishasura — they are almost perfect copies of each other, except in size.

The Pattadakkal sculpture is a miniature on a pillar; the asura is defeated and running. The other two are large panels several feet tall and high.

Very subtle differences mark them: in the Ellora version, arrows fly, showing the heat of the battle. In the Mamallapuram version, the asura is about to retreat.

Mithunas, dvarapalakas, ghata-pallavas, the entire Ramayana and Mahabharata in miniature — the cornucopia that is Ellora is endless.

No essay can capture them. One of India’s greatest artists, Sri Chandru, ex-Principal of Government Fine Arts college, Chennai, was so taken by the rajaleelaasana of Siva in a negligible corner under a mandapa, and its resemblance to this posture in Vettuvankoil, that he immediately tried to mimic it.

Bhrighu and Shukra would have smiled knowingly.

We can see patches of mortar and some painting over them in several sculptures and walls of the temple. They are most visible in the sabha mandapa, especially on the ceiling.

It is quite dark here, so difficult to see and photograph. One wonders how the artists painted such beautiful pictures in such dim light.

Of note is a painting of Siva in what seems to be Bhujanga Trassa, one leg lifted as though frightened (trassa) by seeing a snake (bhujanga); a popular theme among Chola bronzes, where the left leg is raised; here, though, it is the right leg raised, a variation only found in Madurai.

The paintings of Ajanta are more famous. But there are also paintings in the Jain caves of Ellora not to be missed.