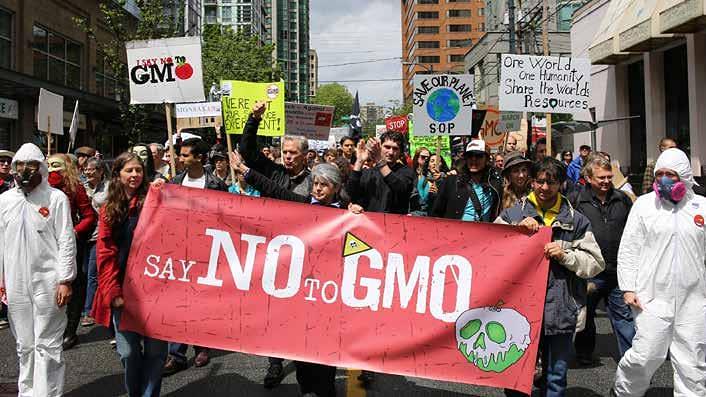 The intemperate attack on Viva Kermani's article 'Let's be honest about GM crops' by Shanthu Shantharam in his rejoinder, 'Genetically-Modified Crops Are The Future, Here's Why', has entirely exposed the many limitations of the biotechnology industry and the science it represents. There is the matter of Shantharam’s taunting language towards the writer, Kermani, while he has done nothing to take issue with the substantial points she has raised.

But there are far more weighty matters of the roles and responsibilities of science, of agriculture and the cultivation of food and of the experiences of society and scientists alike with a type of scientific domain (that is, biotechnology) and the effects of its use. These have either been entirely ignored by Shantharam, as he has done for the roles and responsibilities of science or have been given an importance – in the case of agriculture and the cultivation of food – that is simply not to be found outside North America or been presented as being successful alone (the effects of the use of biotechnology, as seen by scientists and societies), whereas the 40 years of the existence of this technology are accompanied by 40 years of charlatanry which has ducked behind the worn shield of 'science'.

Although Kermani is right to take strong objection to the tone (bordering on vilification) of Shantharam's rejoinder, and has countered his assertions, I find that the position he has publicly taken through the pages of Swarajya and as a member of a scientific community that is engaged in one domain, stirs pity rather than blanket censure. Scientists are no different from any other member of the society to which they belong, however much academic laurels, handsome stipends and access to the corridors of political power may make it seem otherwise.

The particular 'temper' that scientists are to possess (some do, others don't) is found much more commonly among the real functionaries of a thriving society: municipal workers, factory workers, nurses and orderlies, postal clerks and so on. Scientists have, in the Western scheme of privilege and reward, been elevated to the uncommon, and thus are prone to suffer in those artificially rarefied realms of asphyxiation. What we have seen is one such example. There are unfortunately far too many, and the system of industrialised 'science' means that those far too many are entirely in thrall of their sponsors.

I would like to call Shantharam's attention to Statute 5 of the The International Council for Science (ICSU). This body is an organisation with a global membership of national scientific bodies (there are 122 members representing 142 countries) and international scientific unions (31 members). It is more than likely that the names he has referred to very early into his rejoinder – he has named several national science academies – are members of the ICSU.

The ICSU's Statute 5 has to do with the principle of universality (freedom and responsibility) of science and this states: "The free and responsible practice of science is fundamental to scientific advancement and human and environmental well-being." The Statute also states that "It requires responsibility at all levels to carry out and communicate scientific work with integrity, respect, fairness, trustworthiness, and transparency, recognising its benefits and possible harms."

Thus under one of the most important statutes of a leading, if not the most widely subscribed to, science council, Shantharam's arrogant claims and taunting manner have no place. Whether from an individual scientist, an institute for scientific advancement in a certain domain, a regulatory body or a private company whose products are claimed to be science-based, claims and communication of this kind fall afoul, and markedly so, of Statute 5.

The difference between members of the biotechnology industry (and their partners whether in academia or para-statal organisations) and scientists who practice and conduct themselves under the guiding principles of organisations such as the ICSU (and also the International Social Science Council, of like pedigree) is quite simply that society and environment are their universe, and this is a recognition of the most elementary relation that any kind of inquiry – whether it is called 'science' or shastra, indigenous knowledge or customary practice – has with such a universe.

Because this elementary relation is rejected (it being inconvenient for industries like biotechnology, but the energy industry – with its nuclear dimension, an ever-threatening one, the trading networks with their inventories of tens of millions of tons of useless goods for which markets are created, are some others) the inquiry into risk and likely return, safety and the consequences of unsafe practices also stand rejected. The replacement behaviour from the overactive advocacy that promotes biotechnology, GM seed, crop and food, and industrial agriculture is to repeat, over and over again from as many 'scientific' talking heads as can be mustered, that GM is safe and the only alternative.

On the other hand, there is not a small roll call of scientists (or those who once, in the sense that post-modern civilisation believes, were scientists) who have gone beyond the peer- and institution-imposed boundaries of their scientific domains to study intently such questions. Their answers have illuminated the enquiries of hundreds of thousands, who are bothered less by the presence of genes and whether they can (or should) be tinkered with and more by the interconnectedness of living systems. David Suzuki is one such scientist, and I am not at all surprised that Shantharam dislikes him.

How many more within science, and of science, can the Shantharams of the biotech industry dislike and vilify and with what dwindling array of puny arguments? About four months ago, a new project dealing with the risks of genetically-engineered plants was set up in Europe. For its participants, the reasons that impel their new activity are few but greatly compelling: current regulatory practice for risk assessment in Europe is not sufficient to deal with the real dimensions of potential hazards associated with genetically-engineered plants, the existing standards are strongly influenced by the biotech companies and are therefore unacceptable, a manner of risk assessment and the new regulation that should flow from such assessment gives much higher priority to the protection of the environment and consumers. This work is being undertaken by scientists – the European Network of Scientists for Social and Environmental Responsibility (ENSSER), the Critical Scientists Switzerland (CSS), GeneWatch UK and Testbiotech.

These are the science groups that European consumers now turn to for guidance and they are a tangible demonstration of the uses of the 'temper' that science has long prided itself as possessing. It is also and sadly, a reflection of the state of affairs in India that we have lacked even the most rudimentary dialogue between consumers, regulators and food producers, (not industry) neither on safe food nor the risks of even the current high-input agriculture (and its reckless propagation of deadly agro-chemicals, synthetic fertiliser and pesticide). That this lack of communication is being exploited by the biotechnology and GM corporations who speak through their brigade of talking 'scientific' heads to public through rejoinders such as the one Shantharam has written is reprehensible and morally repugnant.

Crucially, Kermani referred to four high-level reports in her article: the Parliamentary Standing Committee on Agriculture's report on GM crops (which spent several months on hearings and taking written and oral evidence) in 2012, the Jairam Ramesh report of February 2010 on Bt Brinjal, the Sopory Committee Report on regulatory oversight concerning cotton and the Supreme Court of India's Technical Expert Committee concerning GM field trials whose final report was released in July 2013.

The findings, conclusions and recommendations of all these, which are referred to by Kermani, have not been touched at all by Shantharam's rejoinder. Instead, he has opted to sling mud in every direction. Thus Jairam Ramesh "colluded with activists", the Sopory report was not about "regulatory approval of GM crops" – in fact, it was entirely about falsification and shocking regulatory oversight – and is "irrelevant", and the Supreme Court Technical Expert Committee report "is in limbo" – false again, for in February 2016 the Supreme Court asked the government to reply to a contempt petition filed against the Genetic Engineering Appraisal Committee (GEAC) – the sort of regulatory body that the biotechnology industry subverts and perverts – for allowing field trials of GM crops in violation of the court’s earlier orders.

But in his apoplexy, he has denigrated the Parliamentary Standing Committee on Agriculture as having been headed by "a communist", that its members (there were 21 from the Lok Sabha and 10 from the Rajya Sabha) were not "scientifically enlightened" and that the report they worked on was "drafted by a virulent anti-GM NGO". Such a reaction is preposterous. Shantharam's addiction to adducing founts of authority stop short at a well-established parliamentary mechanism that is designed to do precisely what the biotechnology and GM industries do not want: public inquiry and the spread of truth.

Europe has all but thrown the GM seed and crop out; the only such crop grown in the EU is GM maize in Spain. That too will not last, for European consumers are now educated about the dangers of the make-believe 'science' called GM. Kermani's article 'Let's be honest about GM crops' is one of the many recent contributions to educating the Indian consumer about these dangers, but the biotechnology industry cannot abide such education. How can it? For it has not been touched by honesty and integrity since its misbegotten birth some forty years ago.

This article is part of a debate on genetically-modified (GM) crops. Swarajya has been hosting both pro- and anti-GM views on its platform to foster a healthy debate. You can follow the arguments here.

Rahul Goswami is a UNESCO Asia expert facilitator on intangible cultural heritage, and adviser to the Centre for Environment Education Himalaya, Himalaya.