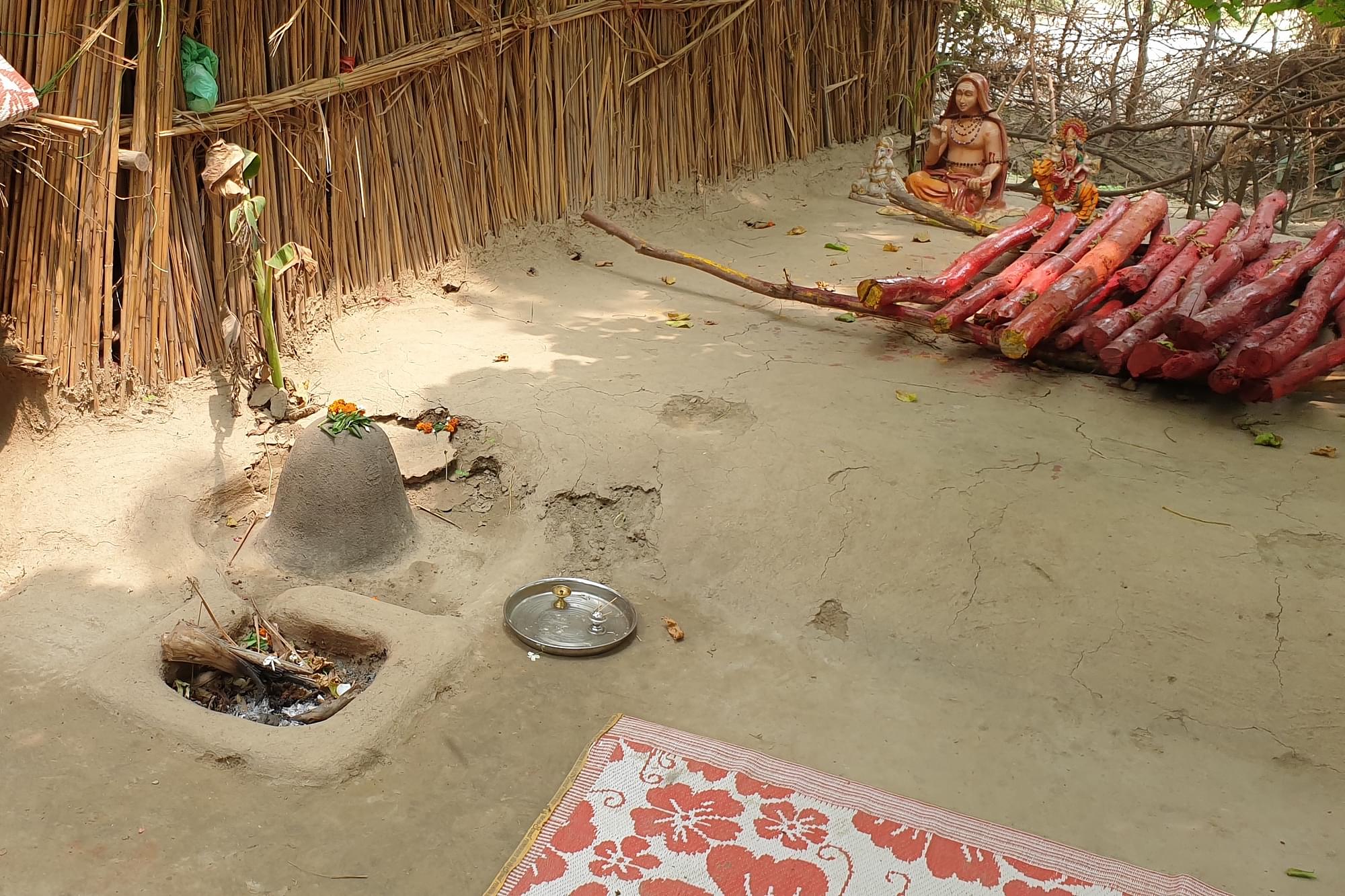 A temple at a refugee camp at Signature Bridge, New Delhi/picture provided by Sudhanshu Singh

Pakistani Hindu refugees in India don’t keep idols at home. The small temples they set up inside their mud or tarpaulin shanties have framed pictures of Hindu gods and their kuladevtas.

Living in the Islamic Republic of Pakistan, where idol worship is not only looked down upon but actively hated and prohibited, often with violence or threats of violence, these families have long replaced the idols with pictures.

“They take away idols and break them,” Imiya Devi, resident of a refugee camp in New Delhi, told this correspondent in December during a conversation about the recently legislated Citizenship Amendment Act (CAA).

Imiya, 23, lived in Sawan Nakhrach Sarithi village in Umerkot in Pakistan’s Sindh province, before moving to India in March 2015 with her family. They now live in a refugee camp in Bhati Mines village near Chattarpur.

Imiya and her father showed a small temple they had built outside their shanty. It was a tiny space – hardly three square feet – created using bricks and stones, and covered with a slab and a blue dupatta. There were portraits of Vishnu, Shiva and Lakshmi and of their community deity, Baba Rama Pir, neatly placed inside.

“Even a small temple such as this is not allowed there. We had a beautiful temple of Kalka Bhawani, but Mussalmans broke it and threw the idols into a well,” said Imiya.

“Insaaniyat kam hai wahan par [there is not much humanity there],” she added.

A Hindu family from Pakistan living in a South Delhi slum shows me their little temple pic.twitter.com/qrrDsmKVRe

If idols are hated in Pakistan, pictures of gods are tolerated only until they are tucked inside a corner of the house. Public display of religion other than Islam is not a luxury the minorities can afford.

In the same colony, Anil, who also hails from Umerkot, told this correspondent that during Holi, women would reprimand their children into playing with colours only within the boundary of their colony. "If the colour as much as touched a Muslim, there would be a riot-like situation,” he said.

On Diwali, they wouldn’t burn crackers as Muslims objected to the noise, he said.

The deep-rooted hatred in the Islamic country’s majority population for Hindu culture and practices, and hence Hindu lives, is why such families keep coming to India in droves, after selling their possessions for a pittance.

The ongoing controversy around a proposed temple in Pakistan’s capital city Islamabad is only the latest manifestation of this hatred.

Construction of the temple – the first ever in Islamabad - started last week after government clearances, but had to be halted following fierce opposition from religious leaders and civil society. Residents have taken to social media to threaten the tiny Hindu community and warn the Imran Khan government of bloodbath.

A cleric, addressing his followers, is seen saying that if the government goes ahead with its plan to build a temple, the Pakistanis would chop their heads and throw it outside the temple to feed stray dogs.

A Tik Tok user has posted a video of his little son warning Imran Khan that if he indeed builds the temple, he would kill “each and every” Hindu.

A man, purportedly a news reporter, went to the temple site, dismantled the under-construction wall hailing Allah, and posted the video on Facebook with a song ‘Main Pakistan hun, main zindabad hun’ playing in the background.

A man – who introduces himself as a Pakistani living in Canada – is seen at the site supporting such vandalism, bad-mouthing “kaafirs” and asking aloud if Narendra Modi is funding the temple.

Hari Om Sahu, an activist who has been helping with rehabilitation of Pakistani Hindu migrants in north Delhi for more than eight years, told this correspondent that such events are regular in Pakistan, only that they don’t come to light as most happen in rural Pakistan, particularly Sindh.

“Most refugees come from Sindh. They tell us similar tales all the time, of local Muslims desecrating or demolishing temples or opposing their repair. It’s because this incident has happened in a city, that it’s being talked about,” Sahu says.

Sahu said he visited a refugee camp in Adarsh Nagar on Tuesday (7 July) and many residents knew about the Islamabad temple issue.

“No one is surprised,” he says.

Sahu says that when he began to work with the refugees, he observed that they avoid any public or community celebrations, and don’t attempt to build common places of worship.

The camp now has an idol of Hanuman installed near the entrance, which he says the residents were ecstatic about when it came up. The refugees followed it up with installation of Indian flags all over the camp which, says Sahu, is also an expression of freedom for them.

Sudhanshu Singh, who has been working for Pakistani Hindu refugees for several years through his organisation Humanitarian Aid International (HAI), told this correspondent that he has observed that the community avoids big temples. “There is inherent fear of such structures,” he says.

Singh says that at the camp he is currently working for - at northeast Delhi’s Signature Bridge – residents have installed a Shiva-linga and idols of their deities, which left him pleasantly surprised.

This camp is relatively new - about a year old. This camp too houses migrants from Sindh.

“They made a temple as they realised they could enjoy religious freedom in India, which was a distant dream for them in Pakistan,” says Singh.

“The refugees come penniless to India, leaving behind all they had. For them, economic deprivation and lack of basic amenities become a secondary concern as they settle in India. More than anything else, they want to celebrate their religious and cultural freedom,” he says.

This freedom in India, however, is not guaranteed anymore, the refugees feel. Violent protests by the Muslim community across India against the CAA, the long, dramatic demonstration against the CAA at Shaheen Bagh, and the communal riots in New Delhi have unnerved them.

Sahu told this correspondent, “You know how tough are the conditions in India for them. They live in jhuggis without electricity and water, even in this scorching heat. All these years, they have kept their morale up citing newfound freedom. Not anymore,” he says.

The persecution they have lived in Pakistan, is threatening to knock at their doors in India.

Yet, they know they can’t go anywhere other than India. This is their only hope, their only potential home. All they want is to become rightful citizens of India.