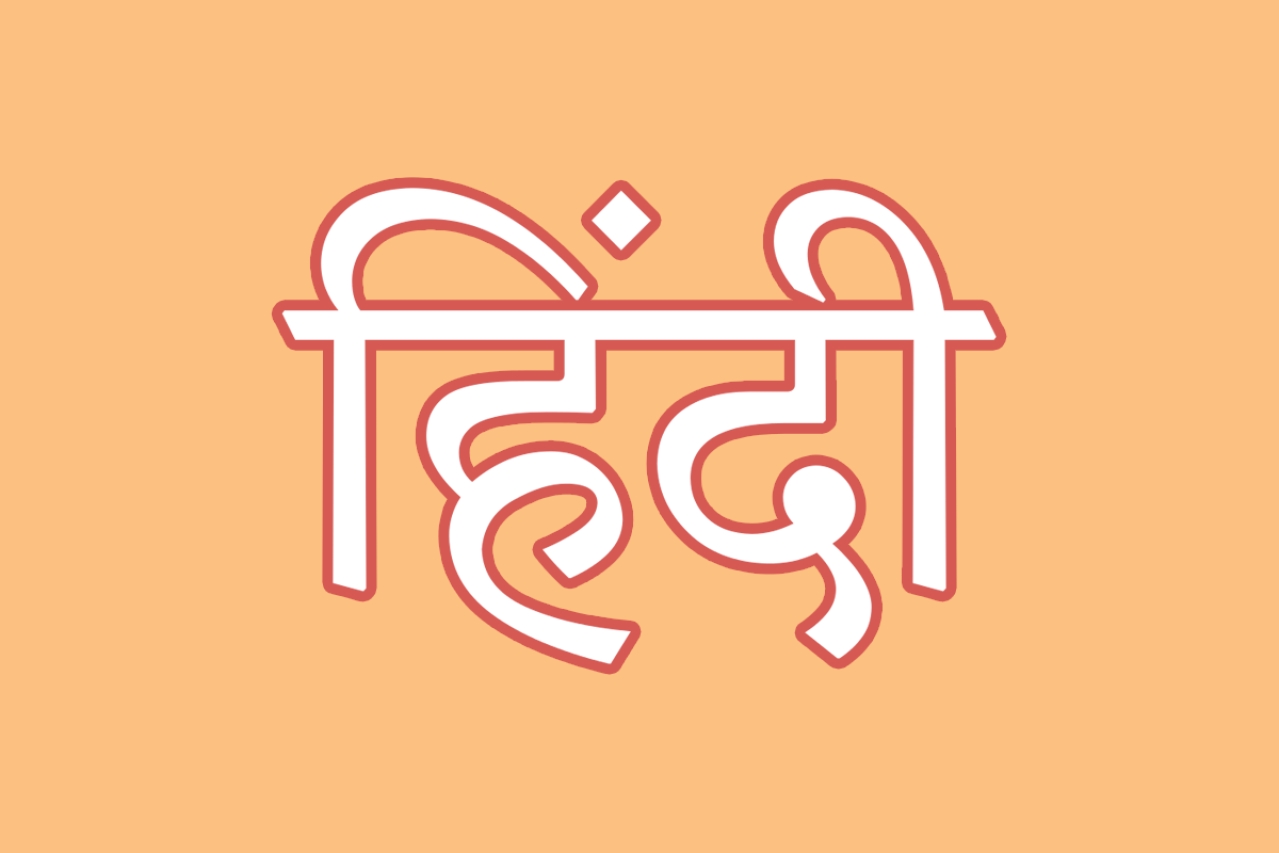 In 2017, I had the good opportunity of interviewing Professor Narendra Kohli in Jaipur. He is best known as the author of novels retelling India’s greatest epics, Ramayana and Mahabharata, which he started writing in 1975.

Professor Kohli is honoured as the fountainhead of the era of cultural resurgence in Hindi literature. So much so that his period of writing is now famously referred to as the ‘Kohli era’.

On the question of the sorry state of Hindi language and the steps the governments can take to promote it, he said that “there is a need to improve the Hindi of Hindi speakers first.”

This sagely advice couldn’t be more relevant for our times.

But there is a tendency among leaders north of the Vindhyas to time and again say something about the need to make Hindi a national link language, which riles up some sections of people down south and creates unnecessary controversy.

So, when Amit Shah tweeted merely suggesting that we all promote our regional languages as well as work towards fulfilling the dream of Mahatma Gandhi and Sardar Patel to make Hindi India’s one language, it kicked up a storm.

Of course these same leaders are found using posters and ads in Hindi during elections to appeal to the vote bank of Hindi-wallas living in their states.

But hypocrisy aside, data shows that Hindi’s linguistic footprint has only expanded over the past few decades.

Thanks to popular media (movies, songs, etc.), proliferation of English-medium CBSE schools (where Hindi is also taught) or simple market economics (influx of Hindi speakers in faster developing Southern states). All of these have done more for Hindi than any imposition ever could.

Hindi has great utility in India irrespective of what many commentators would have you believe. Its growth in spite of any top-down or forced imposition is proof enough of its strengths. And with democratisation of data, the tide may turn decisively in favour of Hindi.

But there is a caveat: all this will happen only if Hindi remains Hindi rather than the monstrosity it is slowly transmogrifying into.

This is why netas from Hindi-speaking states would do well to focus on improving Hindi of Hindi-wallas first more than anything else.

Take for instance the popular media — the most useful carrier to influence the masses. Nothing exemplifies the sad state of Hindi better than India’s leading Hindi dailies.

These are the headlines in the front page of yesterday’s Dainik Bhaskar‘s New Delhi edition. 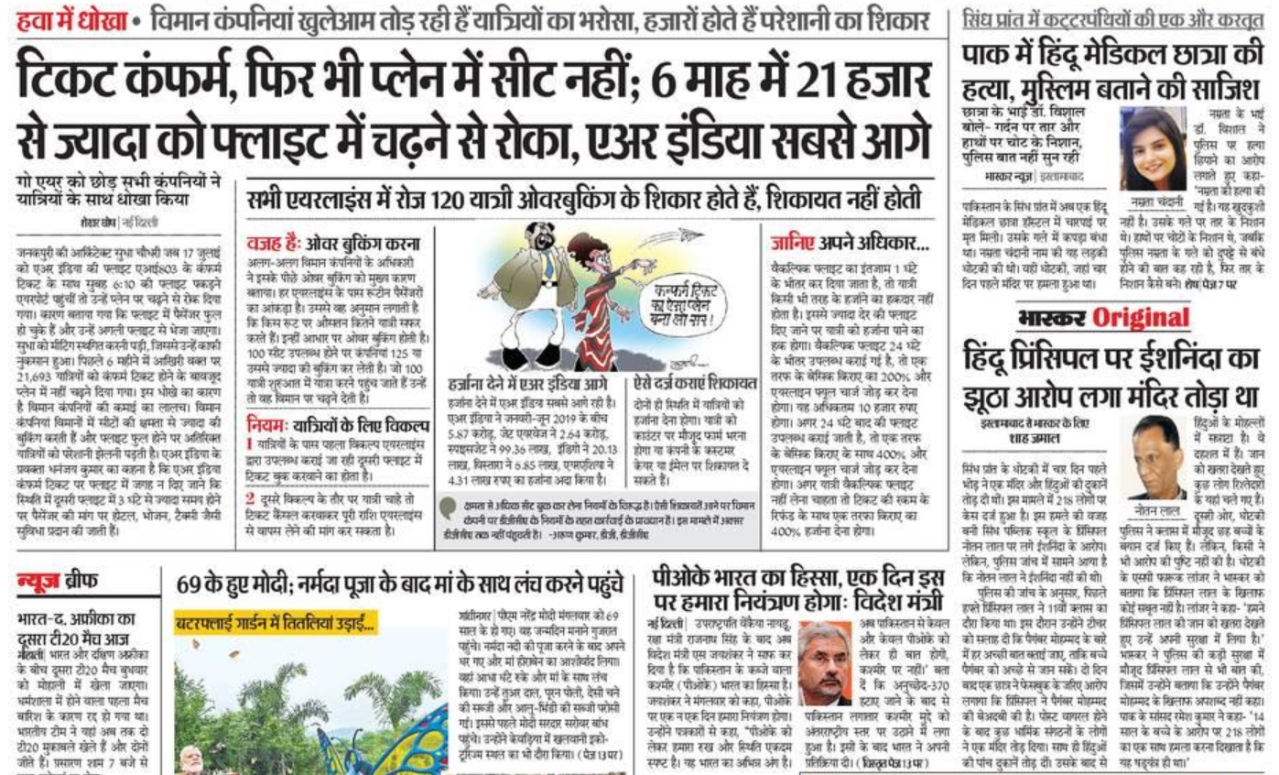 The editors are employing four English words ‘ticket’, ‘confirm’, ‘plane’, and ‘flight’ in a single headline. If they had to use ‘ticket’, at least they could’ve made it pakka instead of ‘confirm’.

The ones with ‘confirm ticket’ were stopped from boarding the ‘flight’ (rather than viman). Surprisingly, in the blurb on the top, the word viman is used but quickly forgotten while writing the main headline.

Of course, there too, viman is succeeded with ‘companiyan’ — a new innovation of the Hinglish world. Below the headlines, we are told that ‘sabhi airlines mein roj 120 yatri overbooking ka shikaar hote hain’.

The paper tells us that Prime Minister Narendra Modi had ‘lunch’ with his mother. He could’ve shared bhojan also with her but, it had to be ‘lunch’.

Then there is ‘Bhaskar original’ section, where editors have surprisingly translated ‘blasphemy’ into Hindi but couldn’t do so for ‘principal’! Above that, a medical chhaatra is killed in Pakistan. One can only thank the paper for small mercies that it used chhatra and not ‘student’.

And this is the level of corruption of only English words in Hindi, only in headlines, only on the front page.

Dainik Jagran, India’s biggest Hindi daily has been able to maintain better quality standards when it comes to language but it is also not free from the ills of such corruption. Still, it must be commended for not turning into a Hinglish paper.

You can still tolerate Hindi with corruption but corruption with Hindi is unbearable.

Top prime time anchors of Hindi news channels have also not escaped from this language adulteration. One wouldn’t like to plug their tweets or videos lest we are accused of personal attacks but anyone can go to their timelines or watch their shows to realise what’s happening.

Take Bollywood now. It is referred to as a ‘Hindi-language film industry’ but from songs to dialogues, Urdu reigns supreme. Even in top 10 most hit ‘Hindi’ songs, on Gaana.com, 3-4 songs would be in Punjabi, and the rest would be in adulterated Hindi with a mix of Punjabi, Urdu and English.

This wasn’t the case three-four decades back. Then Bollywood could still lay claim to being called a ‘Hindi film industry’ but today not so much.

Of course Urdu lovers keep justifying this adulteration in the name of superiority and leave no stone unturned in mocking pure Hindi as fit for only ‘sanskari-type content’. “How laughable it would be if some super-hit Bollywood songs were in Hindi instead of Urdu,” they would say disparagingly.

But the success of Baahubali 1 and 2 shut their mouths where shuddh Hindi dialogues and songs in even Sanskritised Hindi (which topped the charts for months) made it into one of the most successful films of the industry.

It’s ironical that Baahubali was made by someone who doesn’t even belong to the Hindi film world.

Of course, it would be wrong to place all the blame on those in the popular media, They are also products of the society. If there is demand for adulteration-free Hindi from the masses, they will also fall in line.

There is no better nudge than the market forces. Thus the major share of blame has to be shared by the Hindi-wallas in the north, who can’t stop hailing Hindi as the national language and cheer on politicians who regurgitate this line, while Hindi keeps on getting degraded year by year.

What they don’t realise is that a corruption-free Hindi will take them much closer to South Indians and help in national integration than imposing adulterated Hindi currently in vogue on everyone.

The extent of Sanskrit may vary but this facet is true for all regional languages. Is it any wonder then that they consider our Hindi as alien?

Forget normal usage, even names of children parents give in the north are becoming weirder by the day, which have either no meaning or mean something which they would regret when they grow up and come to understand its meaning!

Aarav, Vivaan, Saanvi, Reyansh, etc., are some of the popular names given to kids these days.

The parents who have heaped such punishment on their children unknowingly would be shocked to know what these words actually mean.

Will non-Hindi speakers take seriously a language of people who can’t even give their children meaningful names?

When was the last time we read a serious piece of literature in Hindi?

If there is no one writing popular works in the Hindi language, how will the masses remain attached to their own language forget about evangelising it?

But all is not lost. There are reasons for hope. Sanskrit scholars like Nityanand Misra are countering misinformation on a daily basis around Sanskrit-sounding but meaningless baby names.

Former Prime Minister Atal Bihari Vajpayee excelled in this regard. Popular leaders in the Hindi-speaking states can use the bully pulpit effectively to nudge people towards using a better form of the language.

Even the person at the centre of the current discussion on Hindi, Amit Shah, is not showing fake concern. He is walking the talk. “I work in the Home Ministry; when I came here, not even 10 per cent of the files were in Hindi, now it is 60 per cent. If every department brings this change, then we will be able to promote Hindi,' Amit Shah said in a recent event to celebrate Hindi divas.

Once Hindi-wallas start to learn Sanskrtised Hindi, they would realise that they don’t need to impose it on anyone.

They would be able to communicate much better with people from all parts of the country without any link language. And above all, before sermonising to others on the virtues of Hindi, we should’ve the humility to use it perfectly first.

Get Swarajya in your inbox everyday. Subscribe here.
Tags:
475 Shares