How India Can Lead The World As A Broadcasting Hub 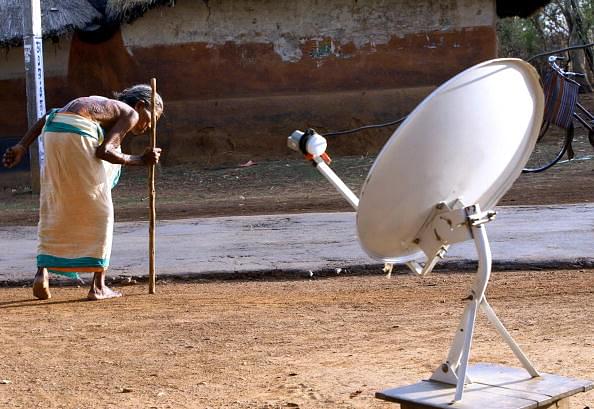 An elderly woman walks past a direct to home (DTH) dish antenna installed outside a village home at Binpur, some 260 kms, south west of Kolkata. (DESHAKALYAN CHOWDHURY/AFP/GettyImages)

It has been over five decades since Marshall McLuhan famously coined the phrase “the medium is the message”. In these five decades the evolution of technology has seen the radical transformation of what we perceive to be the media. The interactivity that internet has brought to the world of media, and the mass participation in this process through platforms like Twitter, Facebook and YouTube, has added a new dimension to McLuhan’s postulation.

It is in this internet influenced new reality that broadcasting faces several existential questions on its future. The extreme personalisation that we are seeing in the digital consumption of both information and entertainment is leading several to question the continued relevance of a linear broadcast experience, be it on radio or on television. On-demand content platforms have spurred the phenomenon of “chord-cutting” in the West, with consumers moving away from cable and satellite subscriptions.

We in India have a unique challenge and an opportunity to build the future of broadcasting. We are the only billion people democracy on the planet that makes us a unique market for news and entertainment content unlike China. While the Chinese market may beat India on sheer scale, we offer the freedom and openness for far greater innovation in broadcasting with comparable scale alongside much greater diversity. To best appreciate why the future of broadcasting must be made in India it would be in order to understand the current state of the industry and how it is likely to evolve.

While terrestrial cellular networks have become the most ubiquitous form of communication, in the case of broadcasting the opposite has happened over the past decade or so. Satellite and cable networks have displaced terrestrial as the most dominant form of broadcasting with the roof top antennae going out of fashion. Despite the high cost to the end consumer and its many limitations, DTH satellite dishes have emerged as a preferred option to consumers who can afford to pay a premium. The poorly regulated cable TV market in India, while offering a lower cost entry point to consumers, offers little guarantee of quality of service. The ongoing push towards cable digitisation has seen bigger players enter the market, but their reach is currently limited to the larger cities and to the more dense urban pockets. In the gap between the premium DTH market and the low quality cable market, lay an opportunity that is currently being tapped by the free to air (FTA) DTH platforms like Doordarshan’s FreeDish.

With transparent online auctions allowing for market based discovery of the value of these free to air channels, we are witnessing an audience revolution of sorts with rural audiences getting on the FTA DTH bandwagon and contributing to a ratings spike to the second tier of general entertainment channels. Meanwhile, a different kind of revolution has happened on radio. Prime Minister Narendra Modi’s Mann kiBaat has spurred a revival of radio as a mass medium with audiences across India tuning into radio to not merely listen to him but to also have him share their stories. This revival of radio is riding on the back of a shift away from amplitude modulation as more and more small towns get on to the FM bandwagon. Taken together, the revival of radio, the digitisation of cable and the free to air DTH audience growth point to the latent demand for broadcasting in the Indian market at a time when broadcasting in advanced markets in the west is losing out significant space to digital on-demand media platforms. The push towards Digital Terrestrial Television (DTT) thus comes at a critical juncture as Doordarshan, the public broadcaster in India looks to expand its DTT footprint from the current 16 cities to another 44 even as the regulator TRAI evaluates the case for opening up terrestrial television to private players.

We in India are at a crossroads as significant public expenditure is set to go towards expanding the digital terrestrial television infrastructure footprint and towards investing in more FM towers. It is time we asked a critical question on whether all of this public spending should go towards technologies of yesterday treading a path where broadcasting eventually loses out to internet based on-demand digital platforms as is already happening in the west. We must also ask what new markets, ecosystems, platforms and new consumer products will this public spending towards digital terrestrial broadcasting spur if the audience experience continues to be more of the same linear television and radio experience.

From DTT to digital radio, it is important that we ask the question on how we can make the future of broadcasting in India to create a whole new ecosystem of products, platforms and devices with potential to sell to rest of the world.

There is no reason why we must tread a similar path as terrestrial broadcasting looks to make the switch to digital riding on the back of significant public spending.

Why must we limit our ambitions in digital broadcasting by committing our public investment to yesterday’s standards with no clear road map for the future?

Why must we restrict our imagination to more of the same linear audience experience with no localisation or personalisation?

Broadcasting technology majors and consumer electronics giants in Korea, Japan and the United States are looking to create such a future for broadcasting with a new Internet Protocol based digital broadcasting architecture. But the sizeable economic opportunity for creating a new generation of platforms, devices and business models from this next generation broadcasting technology lies outside of these countries in a large consumer market like India given our demographic scale, our openness as a democracy and the latent consumer demand within our economy for both content innovation and product/platform innovation.

The promise of Modi’s “Make in India”, “Startup India” and “Digital India” can be fully realised if we target future public spending on digital broadcasting infrastructure whereby we create an ecosystem of innovation, and spur consumer electronics manufacturing in the country, based on next generation technologies, so India emerges as a global innovation hub for the future of broadcasting.

Are we ready to take the leap of faith to create this future of broadcasting in India so we can emerge as a global leader rather than end up as a fast follower and a consumer of technologies and products created elsewhere? 