If You Want News, You Still Have To Come To DD News: Prasar Bharati Chairman A Surya Prakash 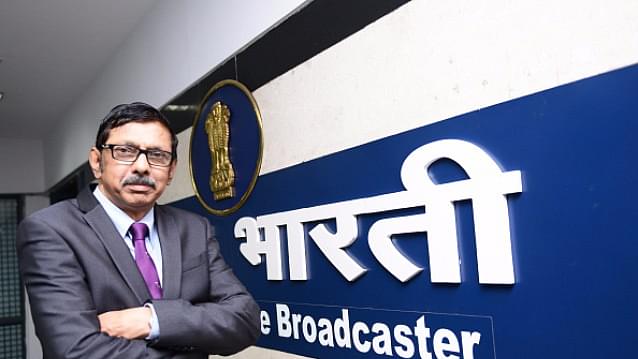 India’s largest public broadcasting agency is headed for change. The Information and Broadcasting Ministry is mulling a proposal to turn Prasar Bharati into a corporate entity. The agency, which has been dependent on public funds for its operations – Doordarshan’s 23 television channels and All India Radio’s 416 radio stations – for the 20 years of its existence now stares at greater autonomy and a possibly new future.

Swarajya’s Senior Manager Shrikantha H S spoke to Prasar Bharati chairman and veteran media man A Surya Prakash to know what this means for Prasar Bharati and to know his thoughts on the Indian news media landscape.

Surya Prakash has been an author and columnist, and has held key positions in media organisations like Zee News, The Pioneer and The Indian Express. His latest book, The Emergency: Indian Democracy’s Darkest Hour, was launched last month at a conference to mark the anniversary of the Emergency.

In his interview with Swarajya, he spoke about what distinguishes Doordarshan and All India Radio from other private channels, what lies ahead for Prasar Bharati and on the new “burden” on the modern media consumer.

Here are excerpts from the interview (edited for clarity).

A big critique of India’s news agencies is that they do not focus on on-the-ground reportage, preferring to comment from behind the news desk. Do you envision DD playing a role to correct that practice with more on-the-ground reports and documentaries?

I won’t comment on what news agencies are doing. But what I will say is, both All India Radio and Doordarshan have a very wide network of correspondents across the country. And we need to organise ourselves better, in terms of our coordination and so on, so that we have a comprehensive reporting system within the country, from all the states and union territories and, of course, from the national capital. That is something that Prasar Bharati would like to do.

A criticism that many have about DD and All India Radio is that they’re very bland. They feel like relics from our socialist days of the past. What steps can be taken to upgrade these two for the modern age?

I don’t agree with you that they are a relic from the past. There are two reasons for that.

First, till 1997, both All India Radio and Doordarshan were virtually departments of Government of India. After that the Prasar Bharati Act came into being – and it was the will and mandate of Parliament that Prasar Bharati be an autonomous corporation. So, therefore, both All India Radio and Doordarshan are part of this autonomous corporation.

Second, over the last 10-15 years, no news story in television is complete if it is one-sided... It is the standard television news format. Both All India Radio and Doordarshan – if you watch Doordarshan News, you’ll realise – they’re better.

I think Doordarshan News and All India Radio enjoy a great deal of credibility, and there is a certain completeness to their news coverage. This is different from what used to happen 30, 40, 50 years ago.

The other point is, if you want news, you have to come to DD News on television. Because where is the news in the evening, in prime time? On DD News, there is a full menu of news stories from across the world, across India. This is yet not available to you on other private channels.

You see, Prasar Bharati is a creation of Parliament. Parliament wanted an autonomous corporation to manage All India Radio and Doordarshan. If you ask me today, ‘are you autonomous?’, my frank answer to you would be, we are on the road to autonomy.

While some openly embrace their political leanings, others try to mask it by claiming to be independent. Do you believe that there can be independent news today where people prefer to choose their version of the same story? Has the consumer market destroyed independent media?

No. What we see today is, you get different versions of the story. You go to different channels and you get different versions. So where is the truth? I think, anyone who has a cable and satellite connection – and we have hundreds of channels to watch – this burden has now been passed on to the media consumer, where he has to look through channels and then arrive at some kind of a mean about what happened and what the news actually is.