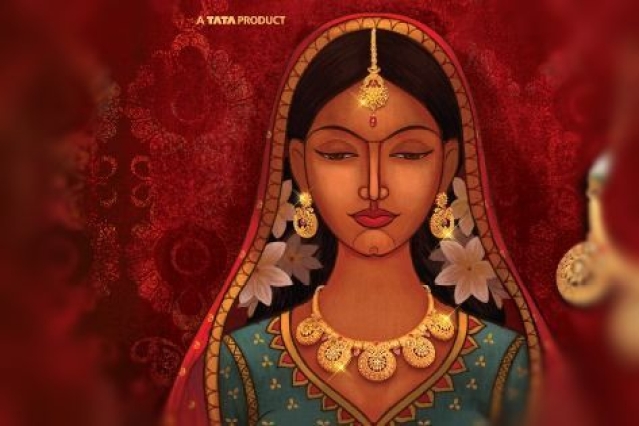 The Ekatvam product range advertisement by Tanishq depicting a Hindu girl in an inter-faith marriage with a Muslim had to be hurriedly withdrawn after being severely criticised in social media by many Hindus for promoting one-sided secularism. The ‘wokes’ and the liberals are angry that an advertisement promoting amity and love between communities is being criticised. They are upset that Titan is bending to appease the majority community.

The Tanishq episode raises important questions. What kind of advertising works? Should brands stick to celebrity endorsements highlighting just the product qualities? Should advertisers stay clear of social messaging? If they do want to comment on social issues, what are the boundaries?

All advertisements should pass the dharmic test.

One may ask why should advertisements pass the test of dharma?

Successful brands use advertisements over an extended period of time, to build a narrative around the core values of the product. Some brands get celebrities who are supposed to embody certain values to endorse their brands. Other brands use social messaging to promote sales.

In the 1980s, the Thums Up brand relied heavily on the larger than life persona of Sunil Gavaskar. With the advent of Gavaskar, India had shed its losing streak and started to win a few matches. The brand started showing Gavaskar playing his glorious cover and straight drives with the jingle, ‘Happy Days Are Here Again – Thums Up’.

After a precipitous loss of form when Gavaskar made his famous comeback, the brand came up with ‘ Sunny Days Are here Again – Thums Up’ which was an obvious play on Sunny, Gavaskar’s pet name. Over the years Thums Up had so closely identified itself with Gavaskar that when he went past Don Bradman’s 29 Test centuries, it was just sufficient to say ‘Thums Up Makes It Great’.

The social messaging approach to advertising is very exciting and is a very high-risk, high-reward game. There have been some extraordinary successes and some spectacular failures.

That adorable little girl won a million hearts with ‘I Love You Rasna’. HMT watches had a great tag line, ‘If You Have The Inclination, We Have The Time’. LIC got it so right with ‘Zindagi Ke Saath Bhi, Zindagi Ke Baad Bhi’. I wonder if the last one will ever require to change. ‘India Comes Home In A Maruti Suzuki’ and ‘ Amul - The Taste Of India’ are other examples of brilliant copy writing.

While the above are examples of stellar successes, we have several social message advertisements which had to bite the dust because of wrong or indifferent messaging.

Sometimes, a product fails to deliver on the promise made by the endorsing celebrity. MS Dhoni had endorsed Amrapali real estate. When Amrapali cheated thousands of home buyers, it was not just the real estate developer who was sought to be punished. People raised questions on the responsibility of the celebrity before endorsing a brand. As a result, MS Dhoni’s brand image did suffer.

Pulling out its Ekatvam campaign, Tanishq issued a statement saying, "The idea behind the Ekatvam campaign is to celebrate the coming together of people from different walks of life, local communities and families during these challenging times and celebrate the beauty of oneness. This film has stimulated divergent and severe reactions, contrary to its very objective. We are deeply saddened with the inadvertent stirring of emotions and withdraw this film keeping in mind the hurt sentiments and well-being of our employees, partners and store staff."

An obviously incensed Tanishq needs more time to introspect and to understand what went wrong with its campaign - why emotions were stirred and sentiments hurt. The bland statement is not an apology.

Tanishq appears to have been baffled by the reactions its advertisement triggered. The inability of Tanishq’s brand managers to comprehend negative sentiments is only to be expected. The brand managers at Tanishq and the advertisement agency handling the creative of Ekatvam product range are alienated from the ground reality of Hindu-Muslim relations. Their reaction is elitist and reeks of snobbery. They appear to be angry that their customers are not able to appreciate their finer sensibilities.

We have been fed with this nonsense of ‘all religions are the same’ for far too long. The elite among us have imbibed the idea of sameness. The sameness theory needs a reality check.

Discussing sameness, Rajiv Malhotra once famously asked Mark Tully, “do you want me to be same as you or will you be same as me?” While the elite believe in the sameness of all religions, the common man is only too aware of one-sided sameness. While a Hindu will readily accept the divinity of Jesus or Mohammed, no Muslim or Christian will ever accept the divinity of Krishna or Rama. The best offer so far is that Rama is Imam-e-Hind. Mind you Rama is not even a prophet to them, leave alone an avatar.

The Quran [2.221] requires a woman marrying a Muslim man to convert to Islam, while a Muslim woman marrying a Hindu man is not required by any Hindu shastra to convert to Hinduism. In the perverted Nehruvian Idea of India, it is the inherently liberal Hindu who must prove his secular credentials every day by accepting the false equivalence between Hinduism, Christianity and Islam.

Till 2019, yes surprisingly even between 2014 and 2019, Hindus had to accept the Nehruvian Idea of India. Now that the New Idea of India is slowly finding expression post-May 2019, the essentially liberal Hindu is refusing to accept one-sided sameness. She is now refusing to accept sole responsibility to keep India secular. She has started demanding mutual respect in inter-faith matters.

Muslims and Christians have a historic opportunity to reassess their relationship with Hindus. They can either openly acknowledge the differences and stop claiming minority benefits under the idea of sameness, or reform and accept mutual respect as the founding principle of New India.

The elitist and essentially ignorant brand managers working for large corporates should desist from venturing into the inter-faith domain. Their ekatvam is unsustainable and hence represents an adharmic worldview. In the New India, all are equal, so long as they are able to accord mutual respect to each other.