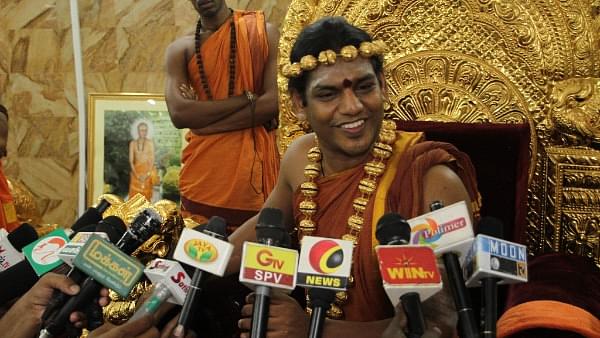 There is a sense of palpable relief among Hindu activists in Tamil Nadu after a Christian home for the destitute, St Joseph’s Hospice, finally emerged as the focus of adverse media attention as gruesome details emerged about possible bone trafficking of the deceased. Local authorities announced yesterday (26 February) that they will shut down the institution with immediate effect and inmates will be shifted to other homes.

The protests culminating in the closure of the institution once again brought to the fore the festering issue of deep-rooted anti-Hindu bias in Tamil news channels. Tamil Hindu field activists and social media warriors point out many instances to make their case. When two adult women, exercising their free will, took up brahmacharya (monkhood) as a spiritual path, there was widespread debate in Tamil media, often portraying the Isha Center negatively, with news anchors often taking a visibly hostile anti-Hindu position.

But why is there no such commensurate coverage on the shocking allegations leveled by villagers in the vicinity involving the disposal of 1,600 destitute bodies by a foreign-funded Christian non-governmental organisation (NGO) run by a Kerala pastor?

A section of the media could well counter the charge of anti-Hindu bias by pointing out that at least two to three mainstream news channels did extensively cover the murky happenings inside the St Joseph’s Hospice. While conceding on the limited coverage of the horrifying events in the hospice, the activists point to a deeper structural anti-Hindu bias deeply embedded in the Tamil news media. If a Hindu “Swami” is caught in a scandalous situation, it is portrayed as an essential and inevitable outcome of the superstitious and exploitative nature of Hinduism, while the case of the Christian NGO is shown as an exception – a tiny island in the ocean of Christian charity and love.

In the summer of 2010, the Nithyananda ‘scandal’ burst forth upon Tamil Nadu. The media went berserk. The Hindu spiritual leader himself went into a confused defensive mode and provided explanations ranging from ‘it was a morphed video’ and they were in a ‘state of higher consciousness’ to arguments like ‘whatever happened was not illegal’ and so on. The loyal members of the sect also claimed that the video was fake.

What was really scandalous was the prime-time airing of the video – an obscene violation of the privacy of two individuals, two consenting adults. Whether the act is unethical is something the believers of the cult need to debate among themselves. The media in Tamil Nadu, however, became obsessed with the ‘Swami’ and the actress. It should have been an unimaginable torture for the actress. If at all this writer has to credit the so-called Swami with a miracle, it is that the actress survived the media’s onslaught bravely. It was as if the media had turned into a lynch mob. Cartoons flooded the magazines. Spoof videos abounded on social media. Nithyananda and his saffron attire became a symbol of sex scandal in the collective psyche of people. Dravidianists and anti-Hindu intellectuals vied with each other to pen opinion-editorials condemning not just Nithyananda but the entire sanyasi legacy of Hinduism.

Nithyananda was just a name; the real target was Hinduism. It was an opportunity for some to pour out the visceral hatred that the dominant elements in the media have for Hinduism.

Around the same time as the Nithyananda scandal, the Supreme Court of India, in an order dated 31 March 2010, queried the Tamil Nadu government about “a large number of children below the age of 16 years... illegally transported from the North-Eastern States to the State of Tamil Nadu”. The reason? The apex court said that the Superintendent of Police for Kanyakumari district had filed an affidavit which “mentioned therein that it was found that 76 malnourished children from Manipur and Assam were kept at the child care home at Kuzhithurai in Kanyakumari District of Tamil Nadu”.

In Kanyakumari, the evangelical orphanage scandal not only included children from the north east, but also local children. It was July 2010. Even as the mainstream media aired sensational programmes about Nithyananda, the child helpline in the district continued to flash on screens, and desperate voices sought immediate rescue. Thirty-two children were rescued from Arumai Packiam Immanual (API) orphanage. Sexual abuse of children by evangelists was reported by the rescued girls. Yet there was no media outrage.

In fact, not just Kanyakumari district, even in the neighbouring Tirunelveli district, Manipuri children were rescued from another evangelical children’s home run by one Immanuel. Some of them alleged sexual exploitation by the owner. The Times of India in its report titled 'Child traffickers from North-East set up base in Tamil Nadu' (26 January 2010) wryly noted: “Incidentally, a majority of homes charged with trafficking are run by missionaries or evangelical societies.”

Even in 2005, when the media was focused on the arrest of Jayendra Saraswathi of Kanchi, there were news reports of north-eastern students dying mysteriously in evangelical orphanages in Tirunelveli district. By 2010, in Sholinganallur of Tirunelveli district, 93 children from Manipur were rescued, of which three were found hiding under a closet. In Kanyakumari, 76 children from Manipur were rescued. Then, another 27 Manipuri children, kept illegally at an evangelical home near Mayiladuthurai in Nagapattinam district, were rescued by authorities. In Coimbatore, another prominent evangelical home was exposed for trafficking children from Nepal.

With a show of indifference from both the media and the intellectuals of Tamil Nadu towards institutional child trafficking and abuse, the problem continues to this day, with only occasional reporting.

In 2012, Sujata R Karthikeyan, director of social welfare (Odisha), with a four-member team from Odisha rescued 37 children of the state from the evangelical homes of Tamil Nadu. In this instance, institutional networking went up a notch. The children were taken by freelance evangelists and given to Catholic church-run institutions. According to an Express News Service (ENS) report, dated 23 June 2012, DSW officials “found 18 children from Odisha confined to a hall on the campus” of a “Roman Catholic church, St Theresa’s Church, near Kulasekharam”. Clarat (47), a Protestant pastor (most probably a freelance evangelist), rescued the children “from Blessing Trust, an NGO run by his friend, Rajkumar, near Coimbatore, and lodged at the church where his friend, Fr Lawrence, was a Parish Priest”.

Soon such rescue work carried out by district child welfare authorities against children’s homes run without securing government permission and not adhering to state norms, were given a communal dimension. The local United Progressive Alliance (UPA)-Dravida Munnetra Kazhagam politicians like the then-member of Parliament Helen Davidson, alleged that district child welfare authorities were acting against the Diocese of the Church of South India (CSI). She demanded cases against the CSI Bishop for running such children’s homes without proper clearances from the state agencies. Again, the media remained a mute and indifferent witness to institutional child abuse.

In all these years, there have been few media debates about the gross violation of child rights. Literary festivals which scrutinise every tweet published by the so-called Hindu right-wing and manufacture paranoid Hindutva-dystopian fantasies, have never felt the need to discuss the trafficking of children – a violation of basic human dignity and right – by evangelical forces.

The disturbing fact is that institutional child abuse in India, especially in Christian educational and residential institutions, has a far more sinister dimension than the child abuse scandal unearthed in the United States. While there have been suicides and mysterious deaths of students in Catholic institutions in South India, almost all Christian denominations run evangelical homes for orphans, many of which have serious abuse problems in their closet. Under the UPA regime, political clout was used to prevent authorities from taking action against Christian orphanages violating the rules and regulations for child safety.

Now see which story the media in Tamil Nadu, not just tabloid journalists but the mainstream media, has portrayed as the moral crisis of Tamil Nadu. Child trafficking and malnourished children kept in evangelical prisons across the state, or a video obtained in violation of the privacy of two consenting adults? This large-scale institutional child abuse, which anywhere else in the world would have shaken a nation’s spirit, if not the world’s, was not discussed in the media, while the Nithyananda video was blown out of proportion with a collective voyeuristic perversion.

This, then, is the greatest abuse scandal that arises from the anti-Hindu mindset of some of the dominant sections of Tamil media.

Beyond the Whataboutery: The Real Question

The point is that Hindu activists and media campaigners have to look at the larger picture. Hindu institutions of service and charity are essentially institutions of a developing post-colonial nation-state and the last standing pagan civilisation. In contrast, the Christian institutions operate from the surpluses derived from colonial gain and are fueled through an expansionist vision of theo-colonialism. Colonial discourse using the abject disparity in the control of narrative created the dark stereotypes of exploiting pagan priests and criminal mendicants of colonial cultures against the stereotypes of liberating self-sacrificing Christian priests in white robes. This should explain the inherent dislike and hatred an intellectual feels for the saffron-clad Yogi as the chief minister of a state, while happily accepting the image of Padre-leading anti-national Luddite agitations in Tamil Nadu.

So, Hindu activists and the media faces of Hindutva in Tamil Nadu should not allow the recent exposé of the Christian NGO to devolve into a whataboutery of media bias. It is a clear proof of how the malaise of hatred against Hinduism, camouflaged as rationalism and social justice, has made the media and general discourse in Tamil Nadu insensitive to real human tragedies.

A caveat: To this writer, most of the modern-day “gurus” are Rajneesh clones with doubtful, if not false, claims of extrasensory access to spiritual knowledge and powers. These claims, in the writer’s opinion, thus far have not stood the scrutiny of professional stage magicians. If both a person with a spiritual third eye and a stage magician can read blindfolded, then unless the stage magician certifies the claim of a spiritual third eye, I will not invoke quantum mechanics or agama to explain the blindfolded reading. Simple stage tricks are enough. James Randi and P C Sorcar Jr can be of much use to dharma here, immunising us against faith-based self-deception and delusion. So this story should not be taken as an endorsement of any of these “gurus” or their worldviews.