RTE Ke Side Effects: Putting The ASER Survey In Perspective 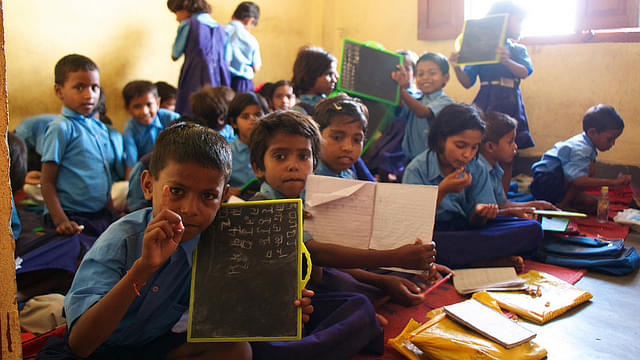 The Annual Status of Education Report (ASER) for 2017 is out. Every year since 2005, Pratham, a non-governmental organisation (NGO) operating in the field of education, has been publishing a report on Indian children’s ability to do basic reading and arithmetic tasks. Until now, ASER focused on assessing abilities of children in primary schools in the age group of five to 16. This year, it made a slight change and ventured out to learn how children in the 14-18 age group fare in learning outcomes.

Where are we headed? “Forget demographic dividend, half of India's rural youth can't even tell time,” reads a headline in the Economic Times. “India’s learning deficit is worsening,” reports Mint. Local dailies have reported about the worrisome situation in their respective states and how students can’t even spot India’s capital on the map or their own state.

While the outlook of India’s education scenario may appear scary after reading these reports, it is pertinent to put the ASER report in perspective.

First, this is a survey of children in rural India. Only 28 of the over 700 districts in India were surveyed – that too, in 24 states. It can hardly be called representative even of rural India, let alone the whole country. On top of that, barring a few, the districts chosen are not very developed. So the fact that children in rural areas, especially in backward districts, aren’t very good at reading and doing mathematics shouldn’t come as a surprise.

The map below shows the districts surveyed in different states. It wouldn’t be fair to say that Ahmednagar and Satara in Maharashtra, Bijnor and Varanasi in Uttar Pradesh, Muzzafarpur in Bihar (and so on) can provide the true picture of learning outcomes in these states. We need a more rigorous exercise on this front, preferably by Human Resource Development Ministry, covering all types of areas – rural, semi-urban, urban and metropolitan.

Second, this is a household-based survey. We do not know the background of those surveyed. Where do they study? Do most of them attend government public schools or private ones? This distinction is quite important because earlier ASER surveys have revealed significant differences in learning outcomes of students enrolled in public and private schools. Since we don’t have this information, it’s hard to diagnose the problem precisely. Hence, an accurate prognosis cannot be made.

Third, ASER data is not open. As Parth Shah of the Centre for Civil Society writes in his column, outcome data from District Information System for Education (DISE) or National Sample Survey Organisation (NSSO) is fully in the public domain, but ASER data is not. “Only “processed data” comprising final results on the chosen parameters are made public. We have to accept the conclusions the surveying organisations draw from the data; there is little scope for independent and in-depth analysis. This is a great disservice to the cause of education in our nation,” he writes.

Without raw data, it is not possible to do an independent analysis and we have to believe what Pratham puts out in public.

However, this is not to say that all is well. Far from it. ASER may not be perfect, but finding fault with it will be akin to shooting the messenger. That’s not the intention of this writer, but to rather put the findings in perspective.

As far as learning outcomes are concerned, we have consistently done poorly in world rankings, both at primary and college levels. We were ranked 72 of 74 in 2009 in the OECD PISA rankings which test reading, math and science for elementary school children. The performance was so bad that we decided to not take part in the rankings instead of focusing on improving our schools. The Legatum Prosperity Index of 2015 ranked India at 92 of the 145 countries rated in education. No Indian university could make it to even top the 200 in Times Higher Education World University Rankings, 2017. The same fate has met us in other university rankings.

So, we are nowhere close to where we should be. So, what do we do? The answer is hidden in plain sight. The graph from the ASER report gives us the trend in learning outcomes over the past few years.

It is not a coincidence that learning outcomes started deteriorating at the same time as when the Right to Education Act (RTE) came into force. We are at near-full enrollment, but thanks to RTE, which mandates automatic promotion irrespective of how students perform in exams, has led to an increasing number of children successfully completing elementary schooling. Why then are we surprised that Class VIII kids can’t read Class II level texts or do basic arithmetic?

Various studies, including ASER, have proved that students enrolled in private schools do far better than those in government schools with respect to learning outcomes. And the recent unmissable trend, especially in rural areas, has been that more and more children are leaving government schools for budget private schools. But what has the RTE done? It has forced these schools to reserve 25 per cent seats for students from the so-called economic backward sections for almost free. RTE has further put considerable financial burden on institutions by mandating various infrastructure requirements on them. This has made Hindu-run budget private schools financially unviable (minority-run schools are exempt from RTE).

At a time when these budget schools should have been freed from government regulation so that they absorb the supply of millions of students making a transition from the hopeless pit that is government schools, they are forced to choke under the RTE. Only in India could a law named the ‘Right to Education Act’ be the single biggest impediment in realising that objective! The current government has made a start by relaxing some norms, but much more needs to be done.

Government schools are past their sell-by date. They aren’t serving anyone, except the teachers who get paid in lakhs without sharing the responsibility and accountability. It will take us decades to get them on track, that too, only if we can find some politicians who can push for reforms despite resistance, braving the unions. Even if we get lucky on this front, who will take on the quota system, which will forever ensure that the teacher pool recruited will never be of the best quality? We neither have such politicians, nor the luxury of time. Our demographic dividend will be over in the next two decades. We barely have 10 years at the most in this area. Forget government schools. The focus now should be on greatly increasing the supply of budget private schools by removing regulatory shackles and working to bring the poor students to these schools.

If we don’t act soon, India may be staring at a problematic future.