Selective Data On Communal Violence In India: IndiaSpend, English Media Have A Lot To Answer For 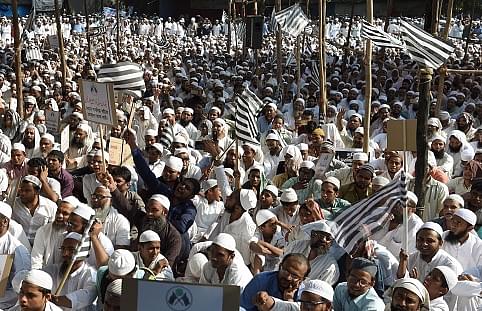 Recently, American daily Washington Post (WP) carried a report on its website that cites data by Indiaspend to say that "reports of religious-based hate-crime cases have spiked in India since the pro-Hindu nationalist government of Narendra Modi came to power in 2014". IndiaSpend tracks reports of communal violence only in English-language media and WP piece admits as much.

The WP piece isn't an evaluation of English media's reportage of communal violence pre and post Modi, but of communal violence under Modi's prime ministership itself. This is evident from their headline ('Rising hate in India') and the way it narrates select cases to back Indiaspend's conclusion that "Muslims are overwhelmingly the victims and Hindus the perpetrators of the cases reported".

The broad takeaway from the WP report thus is that under the current government, there has been a sharp rise in communal violence, which is increasing by every passing year, and it's mostly the majority Hindus attacking the minority Muslims spurred by religious hatred.

A close look at Indiaspend's data (and thus the WP report), however, reveals that it is deeply flawed and dishonest. The reasons, largely, are these:

1) For its so-called 'hate crime watch' (abbreviated HCW from now on), Indiaspend has chosen its source as the English language media. As is well documented, English media by no means provides a balanced or exhaustive enough reportage to be used for a fair, pan-India analysis. It has also been shown that English media cherrypicks cases in which the victim-perpetrator equation suits the narratives it has woven all these years, and has disproportionate coverage of some states as compared to others. It thus fares poorly in fairness and scale compared to their regional language counterparts. Swarajya itself has detailed at least three such cases (here, here and here) but perhaps nothing establishes it better than a long-running Twitter thread by author-scientist Anand Ranganathan which has listed over 50 such instances of brazen selectivity and bias.

2) The choice of cases by Indiaspend from an already selective source shows blatant bias. As we will document below, Indiaspend has consistently picked up cases where Muslims are victims and Hindus the perpetrators, but has ignored cases where this equation changes. Such is the bias that even the high-profile Auraiya sadhu murders perpetrated by Muslim cow smugglers has been ignored.

3) Indiaspend's conclusion from its selective data, based on an already selective source, has been found to be dishonest. As we will show, there are cases in their database where names of Muslim accused have been held back to conclude that religion of perpetrator is "unknown" (Chandan Gupta case), and cases where perpetrators have been named as Hindus even when the source they cite give no such identity.

We studied Indiaspend's data for six months in 2018 namely January, February, April, May, July and August. For each month, we have compiled cases picked up by Indiaspend and compared it with cases they ignored from English media as well as cases that English media ignored but appeared in Hindi media.

If selective picking of cases from English media isn’t enough, Indiaspend has left out inconvenient bits from the selected cases. For instance, for Republic Day violence in Kasganj, Indiaspend has listed three crimes. The first is about "pushing and shoving" where Indiaspend has named Hindus as perpetrators and Muslims as victims. However, their version is not only one-sided but also does not specifically mention who did the pushing and shoving and who was pushed and shoved. Where did Indiaspend get the religion of the victims and perpetrators then?

There’s more. In the episode, one Chandan Gupta was killed and one Saleem Javed was arrested within a week. More arrests, also of Muslim men, happened over the next week. But Indiaspend tracker mentioned the religion of perpetrators as "unknown" until this correspondent highlighted it on Twitter two weeks ago. They explained this miss by saying that "the religion of the alleged perpetrators was not clear initially, and the arrests were made later". But this is, least to say, surprising because in other cases, like Kathua, they have updated the details that were revealed at least three months after the crime.

Another explanation by Indiaspend, which also doesn’t quite add up, is one offered on exclusion of Auraiya sadhus murder case. As per the website, the crime doesn’t belong to their database as “smugglers are motivated by profit and not by hate”. A ridiculous assumption, given that in the alleged lynching of cow smuggler Rakbar Khan, Indiaspend hasn’t considered the possibility that villagers were motivated by love for cow or angered by loss of their cattle as an economic resource, and not hate towards Muslims. After all, even Hindus have been victims of cow vigilantism. Further, what explains Indiaspend including Junaid Khan’s murder in their database when even the court verdict says it was spurred by fight over a seat in a train compartment ?

In the same pattern, their coverage of Ram-Navmi violence in Asansol in March is skewed. Only one out of four casualties has been listed. A day prior to Sitbulla Rashidi's death (that IndiaSpend has recorded), one Chhote Yadav was killed in Ranigunj but his death has been ignored. Also, the source that Indiaspend has cited nowhere states the perpetrators to be Hindus in Sitbulla’s case.

As readers can see, Indiaspend's hate tracker is tailor-made to show Muslims as overwhelmingly the victims and Hindus overwhelmingly as the perpetrators. However, if the cases listed by Swarajya are added to their database, this equation will turn on its head. That said, Swarajya isn't making any claims on our counter data being exhaustive enough to give a fair picture of the hate crimes in India; it has been compiled only to point out serious factual flaws in the former.

Indiaspend's database is routinely cited by a number of media houses to make a comment on religious hate crimes in India. Other than Washington Post, publications like Newslaundry, The Print, Indian Express and The Quint have published a number of articles and commentaries based on this tracker. Interestingly, when this correspondent pointed out some of the above-listed omissions to author of the WP article, Annie Gowen, on social media platform Twitter, she did not respond to any of it. Instead, Gowen derogatorily called this correspondent a "troll" for asking genuine questions. This shows that publications like WP are too pleased with the narrative presented by Indiaspend to even make an attempt to address its fallacies.

Indiaspend's hate tracker follows a similar database created by Hindustan Times under its former editor Bobby Ghosh last year. Called Hindustan Times hate tracker, it was touted as "a national database on crimes in the name of religion, caste, race". The HT tracker, again, was found to be deeply flawed and blatantly biased as shown, among others, by Anand Ranganathan. Later when Ghosh resigned (buzz was that he was forced to resign), the tracker was said to be one of the main reasons behind it. The tracker was pulled down soon after he was replaced. However, no explanations for its bias and the quiet way in which it was pulled down, were ever given by Hindustan Times.

Explanation have now been sought by alert readers from other journalists like Barkha Dutt who recently cited the Indiaspend database in a commentary that controversially concluded that Hindus face no institutionalised discrimination and their claiming otherwise is "nonsense". Unlike Gowen, Dutt refrained from calling critics as trolls but escaped questions on flaws in Indiaspend tracker by saying she would check the analysis.

Similarly, when this correspondent asked Newslaundry's editor-in-chief Madhu Trehan about profiling of crime data based on religious profiles by so-called hate trackers, Trehan replied, "I would have to have access to the source of the data, research and investigate it to give you a serious answer. That editors pick data and stories on what they want you to believe is an old fact. Exclusion and inclusion of stories is subjective, always."

Fair point, but Trehan has not explained why Newslaundry has been routinely citing Indiaspend's data in its reports and commentaries without doing the said analysis.

It is high time media houses do that before further spreading falsehoods. Indiaspend itself has much to answer for.

(With inputs from Madhur Sharma)