Tasteless Tales: Why Charges Against Akshaya Patra Are Misleading 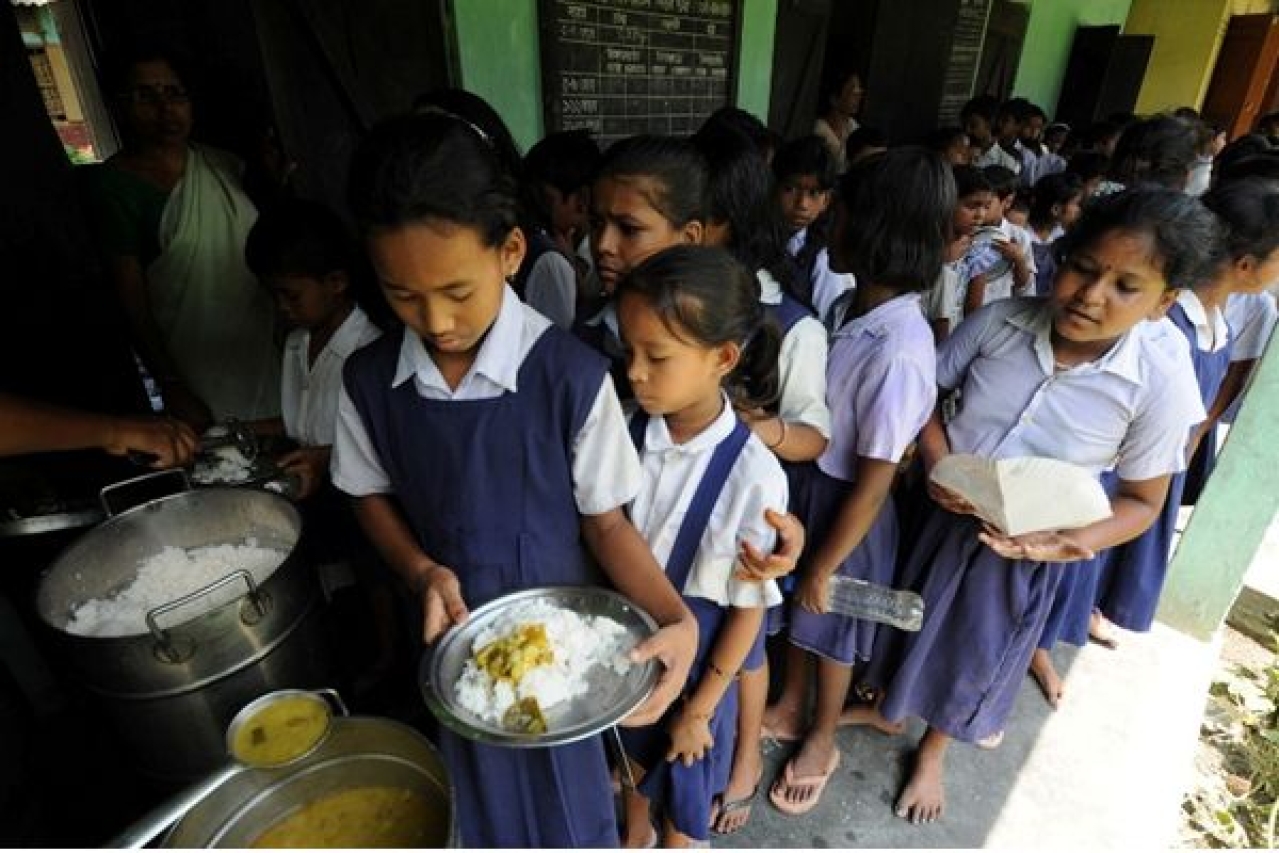 Students waiting in queue for their meal. Source: Akshayapatra.org

There are more than a few parallels between the growth of information technology (IT) industry in India, and Akshaya Patra, the largest provider of school lunches in India, serving 17.6 lakh meals each day. Just like how the IT industry in India really got jump-started with the Y2K bug in 2000 around the southern city of Bangaluru, Akshaya Patra also got going in the same year, serving 1,500 children in six government schools in the city.

At the time, it was run largely on donations. Manipal Global Education chairman and former Infosys director Mohandas Pai presented a vehicle as the first donation to transport food to schools, while Infosys co-founder N R Narayana Murthy was also an early donor. Venture capitalist and entrepreneur Desh Deshpande built a donor network in the US in the 2000s, where I too was one of the many donors, who thought free lunches for children was a brilliant idea, that too executed with software industry-like scalability and precision, with oversight and patronage from some of the top Indian software entrepreneurs, who wanted to do things a little differently.

There was only one small issue, which didn’t really show up until Akshaya Patra became famous as the largest school lunch programme in the world. That issue is that the organisation was founded and run by International Society for Krishna Consciousness (ISKCON) leaders, although it is a separate non-profit set up as a public-private partnership with its own board and governance which by all accounts sets highest standards for any non-governmental organisation (NGO) in India.

ISKCON, as a Hindu religious sect, has certain dietary guidelines, which also spills over into Akshaya Patra, namely that they use a huge variety of vegetables, pulses, spices, condiments and milk products in their meals. But they don’t use other items, such as meat, eggs, onions or garlic. As anyone who has ever eaten a delicious, hygienic, adapted-to-regional-taste lunch from any of their kitchens across India will attest, the food is of excellent quality, and better than most school canteen fare anywhere in the world including rich countries.

The key metrics in any free school lunch programme are very easy to identify. Hygiene and safety are number one, meeting nutrition guidelines is next, cost is third, consistent delivery of a hot meal product, then scalability and finally acceptable taste. This is pretty much it.

In any developed world scenario, providers would bid on the basis of these metrics, and be awarded contracts, and held accountable to delivering on the metrics.

But the Indian public delivery system is a whole different beast altogether, and school meals are just one little cog in the wheel, typically in the control of local vested interests. Every school wants its own ‘inefficient kitchen’, where in many cases food of appalling quality is typically cooked using the cheapest ingredients, cutting every corner in the book. Hygiene standards are non-existent, ingredients are siphoned off, and graft hangs thick in the air like humidity on a summer day in Chennai.

Into this morass came Akshaya Patra, using IIT-educated managers to set up centralised, efficient kitchens with high standards, using technology and logistics that were the best that India’s booming software industry had to offer, with the infrastructure all funded by private donations. It is a miracle that it wasn’t killed on sight by the vested interests, but somehow there was just enough good governance at the turn of the century that their impressive low-cost alone made it appealing to state governments, always short on cash, to let it compete and gain market share.

It grew to 12 states, 15,000 schools and 42 locations with ISO-certified kitchens. It is truly a miracle of successful philanthropy, private sector management and public sector benevolence working together and serving 17 lakh children a day. This is still a tiny market share, only around 1.4 per cent, of the 12 crore schoolchildren, who are given school lunches in India today.

There is a right way to look at the success of this organisation, and a wrong way.

The right way would be to create a nationwide regulator for school meals, use Akshaya Patra as a benchmark for standards, and get the other 99 per cent of school meal providers to conform to these standards or perish.

The right way would be to challenge the private sector to match the prowess of Akshaya Patra, and enable logistics providers, kitchens, and others to both collaborate and compete with Akshaya Patra, and use its learnings to deliver meals of a uniform quality and comparable cost to children across India.

The right way would be to push Akshaya Patra to improve itself, for instance by having them publish menus and calorific values of their meals across their kitchen network, and how they are meeting the standards set by the National Institute of Nutrition. And then ask the other 99 per cent of providers, who serve school lunches to do the same.

In India, there is always a social inclusion component around preparing and eating of food, given the historical social inequality in our society. Let’s acknowledge this and ask Akshaya Patra to disclose how many of their kitchen staff come from Dalit or weaker section backgrounds. We can even ask that Dalit staff be given preferences in hiring if the number is too low. Then, do the same to the other 99 per cent of meal providers too. This is the right way.

Instead, we have a distinct group of vested interests, who are engaged in a relentless campaign to stop governments from working with Akshaya Patra. These groups are largely made up of the following.

Misguided 'progressive' liberals sitting in Delhi: this lot have never set foot in an Akshaya Patra kitchen, tried a meal, or seen how the organisation operates. All that matter to them is that eggs should be served in school, and onion and garlic should be on the menu. Also, how dare an openly Hindu-founded organisation come up with its own menu choices?

Hinduphobes: chief among them is a self-titled outfit called ‘Right to Life’, whose Hindu-baiting leader talks about her mission of serving meat and eggs, made chiefly with Dalit cooks, in local kitchens in every school. Clearly she sees not the children as the focus of a school lunch programme, but has a completely different set of stakeholders who should be favoured instead.

Poultry industry: In every state where eggs are on the school lunch menu, the poultry industry has a strong influence. This is only to be expected, and if they wish to make a cost-benefit argument in favour of serving eggs with meals, they are certainly entitled to do so. In Orissa, Akshaya Patra is happy to work closely with another entity that serves eggs, which the state government mandates.

Local vested interests: from procuring ingredients to fiddling with the number of eggs eaten to the quantity and quality of meals prepared to hiring their friends as cooks, the opportunities for graft are many in school lunch programmes. One can easily imagine who is upset with a centralised, audited, transparent programme like Akshaya Patra.

In the Jaipur Akshaya Patra kitchen, in 2004, I remember seeing a huge glass vessel, 10-feet high, full of little stones and pieces of rubbish. This was the adulterated crap they had removed from the rice supplied by the local distributor before cooking. They told me the story of how the rice distributor came by one day and asked “can I buy that stuff from you?”, so he could add it to the next few consignments again. Apparently, making the small stones and heavy tiny items of scrap to adulterate the rice with, costs money, and he wanted a cheaper source. Needless to say, Akshaya Patra did not entertain his offer.

What are the main arguments from the vested interests? Once you disregard the nonsense arguments, the biggest one seems to be a misunderstanding of how nutritious eggs are versus their cost.

“Eggs are full of protein, and Indian kids are protein-deficient,” the argument goes.

Here are the basic facts.

Pretty much everything served in Akshaya Patra meals has adequate protein compared to an egg.

And what about the cost?

“But eggs have amino acids you can’t get from plant sources,” is another argument.

Sure, but milk and curd are already being served within the meal, and they have whatever eggs have.

“But children love the taste of eggs, especially the non-vegetarians who eat them at home,” is another argument.

There are larger issues here too. The welfare of ‘battery-cage’ chickens, the type of feed and any other hormones or supplements that may be added to the feed, storing a perishable like eggs safely, and the environmental cost of producing eggs, should all be considered.

The bottom line is that nutritionally it makes little sense, cost-wise it is a budget-breaker, environmentally it is suspect, and in safety and hygiene there are better alternatives.

The next line of attack is regarding the lack of onion and garlic in Akshaya Patra meals. Onions and garlic are indeed safe for human consumption. But they are also used a lot to disguise the smell and taste of spoiling and spoilt food. Cooking without them is a real skill, and most importantly it is a marker of freshness and quality when a meal is delicious without adding onions or garlic.

The simple truth is that if you have ever eaten an Akshaya Patra meal, you won’t notice that it doesn’t have onion or garlic. These are not essential nutrients in the human diet by any means. There are hundreds of other edible condiments, vegetables or grains that are also not served. What is so special about onion and garlic that people would agitate for it, other than seeing a worldview that is just not the same as yours and you wish to fight?

The good news is that the Narendra Modi-led national government is in relentless pursuit of efficiency in the delivery of public services. In that framework, Akshaya Patra and its imitators can only thrive and grow, and continue to serve our country and our children for years to come.

Swarajya is proud to count Ravi Mantha and Mohandas Pai as its shareholders.

Get Swarajya in your inbox everyday. Subscribe here.
Tags:
759 Shares