The ‘Pada Puja’ That Modi Performed... 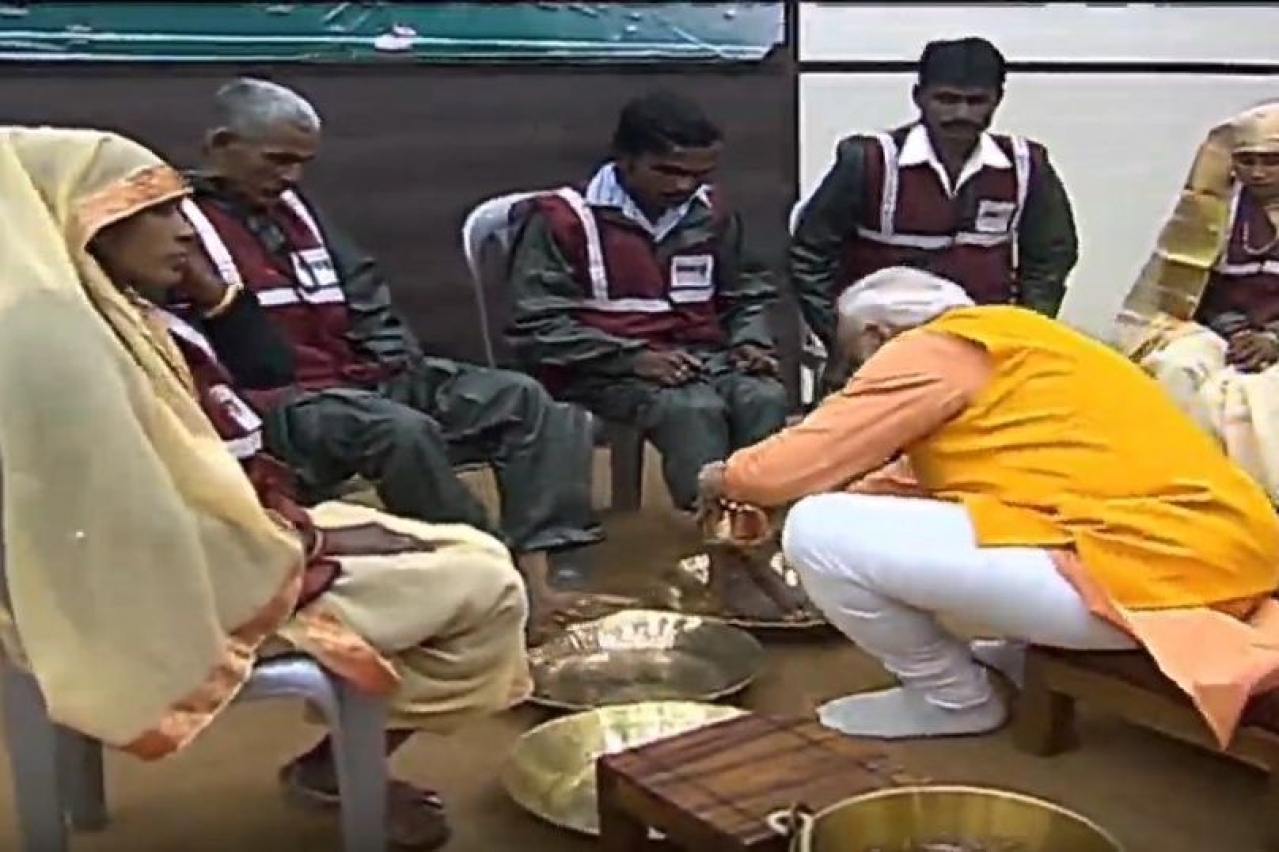 Like all Indians, well actually like the vast majority of the ordinary Indians, watching the Prime Minister of India washing the feet of the hygiene and sanitary workers (three men and two women), was for this writer too through misty eyes. It is hard not to become emotional. So forgive the tears.

When Narendra Damodardas Modi the fourteenth and current Prime Minister of India had the sanitary and hygiene workers place their feet on a tray, and washed them with his hands, he in his own characteristic way, sent a strong signal to the entire Indian society. And that is no simple message. The power of the image is bound to demolish domes of prejudices deep seated in the collective society colonised in its mind for a thousand years.

In 1918, in the princely state of Indore, the prince honoured polymath Patrick Geddes for battling the plague that was ravaging Indore. In order to improve the sanitary conditions of the city, Geddes decided to use the annual Deepavali pageantry to propagate values of hygiene. Ram killed the Ravana of unhygienic conditions. This was followed by the sanitary workers proceeding in richly decorated chariots, wearing turbans similar to the other high officials of Indore.

The Mayor of Indore was happy, and what he told Geddes, recorded by him, are words that would deeply shame us as Indians. He said that it was a marvellous idea but as a Brahmin he himself could not do it, but Geddes could, as he had no problem with the local taboos as a European. The Mayor ended his words of gratitude to Geddes thus, “... you have treated them as men, as equals”. It should be noted that the Indo-philia of Geddes itself was triggered by the influence of Swami Vivekananda and Sister Nivedita. Yet the truth of the words he spoke surely makes us all cringe in shame.

The ugly prejudices not only exist against our sanitary workers but they are reinforced. It’s apt to recall here, a famous comedy scene in a Tamil film that hit the silver screen some years ago. Well-known comedian Vadivelu, who had just returned from Dubai, questions the lead actor (played by Parthiban, an EVR supporter), who claims to have worked in Dubai, about his whereabouts in the city. Taken aback, the hero tries to put the comic actor on the back foot, by asking if he was actually cleaning toilets in Dubai. When the shocked comedian confesses that it was his actual occupation in Dubai, then the hero asks him to move away as he could still smell the bad odour.

The entire Tamil Nadu laughed for this ‘comedy’ which actually reinforced very strongly the notions of untouchability. Not a single film critic saw this ‘comedy’ through the eyes of the child of a sanitary worker, whom the film degraded. This is just one sample.

Modi has been systematically working to demolish this mind set. In 2016, the Modi government appointed Dr Bindheswar Pathak, the founder of Sulabh Foundation, also called the ‘toilet man of India’, as the brand ambassador for Swachh Rail Mission. Dr Pathak had not only spearheaded the cost-effective toilet movement in India for the last four decades but he had also fought against the untouchability associated with sanitary service providers. He had broken the caste taboo.

Sulabh International also employs Brahmin caste labourers as well in their Sulabh toilets. According to journalist Francois Gautier, all the 50 Sulabh public toilets in Delhi are cleaned and maintained by Brahmins with five to six of them working in each of these toilets. That the Modi government made Dr Pathak its brand ambassador for clean India mission, speaks volumes about the value system embedded in this government.

In June 2017, the mygov.in portal asked the citizens to publish photographs of them with the manual workers around them, and in response, many published photos with sanitary workers. Thus, Modi has been fighting against perverted notions that certain occupations are demeaning. 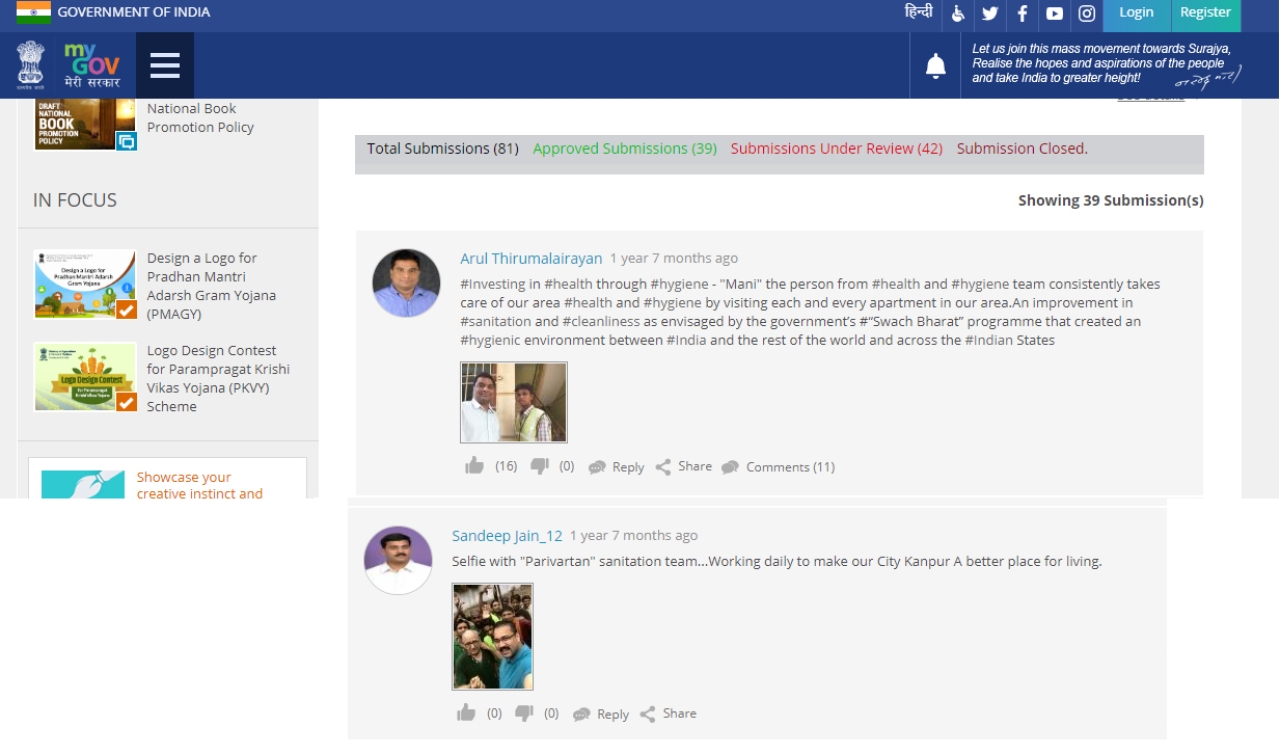 To understand why Modi is so attached to the ‘clean India’ mission, and determined to honour sanitary workers, one needs to understand the organisational heritage the current Prime Minister of India comes from. He is a swayamsevak, and swayamsevaks have a tradition. Their spirituality is rooted in Sri Ramakrishna-Vivekananda Vedanta tradition. Incidentally, it is also the tradition to which Mahatma Gandhi also belongs to if one cares to read his spiritual musings. In all these, the common connecting factor is the practical humanistic vedanta which demands that we honour the divine in each and every human being, if not in each and every living creature - but definitely the human being.

In India, social stagnation like elsewhere in civilisations had marginalised sections of fellow human beings and had assigned to them certain jobs generally considered undignified. Sanitary and hygiene workers were considered untouchables. When Hindu renaissance in the modern age started, it happened not through the British educated elite but through the so-called illiterate but spiritually-rooted masters.

One such was Sri Ramakrishna Paramahansa born as Ganghadara. This illiterate Kali temple priest took up as part of his spiritual sadhana, cleaning with his head the nightsoil of a person considered as untouchable. While doing this he was praying that the goddess remove all notions of superiority and inferiority both social as well as individual. “Make me a servant of all” was his prayer when he did this sadhana. Later, his illustrious disciple, Swami Vivekananda, spoke of a new India arising “out of the peasants' cottage, grasping the plough; out of the huts of the fisherman, the cobbler and the sweeper”.

Mahatma Gandhi, though initially wedded to the idea of caste by birth, was gradually transformed by his interactions with the seers of Ramakrishna-Vivekananda vedanta. He came to accept varna by worth rather than birth. Nevertheless, at all times he was against untouchability. He insisted that all his followers and companions clean their own toilets, a task which was then done manually by hygiene workers.

When Rashtriya Swayamsevak Sangh (RSS) was created by Dr Hedgewar, in its training camps, the approach to remove the notion of defilement and pollution was taken further. The swayamsevaks in the camps are given tasks alternating between preparing food and cleaning of toilets.

So here the swayamsevak, who cleaned the toilets of every one in the camp the previous day, would be preparing food for everyone the next day. Andersen and Damle have pointed out in both their books on the RSS that this was meant to “undermine notions of purity and pollution associated with various kinds of works in the many layers of Hindu caste hierarchy”.

Swami Chidbhavananda (1898-1985), a Ramakrishna-Vivekananda vedanta monk and also an important educationist as well as institution builder in Tamil Nadu, was one of the earliest personalities to question Mahatma Gandhi’s notion of birth-based varna system. In his educational institutions, he emphasised that the worship hall, puja room, kitchen and toilets should be kept clean with the same dedication.

Swami Chidbhavananda himself had got into the septic tank to clean it when there was shortage of people. Swami, who was initially apprehensive about the sangh, later became a strong supporter and regularly allowed sangh camps to be conducted in his institutions. He also used to address the RSS cadre. Let it also be remembered here that it was Jan Sangh, when it was in power in Udupi municipality, made manual scavenging illegal.

Taking into account all this legacy, now look at the video of India’s Prime Minister washing the legs of sanitary workers at Mahakumbh – then one can understand the real significance and the grand vision embedded in that action.