Misery To Continue: No Easy Solutions For India’s Traffic Woes 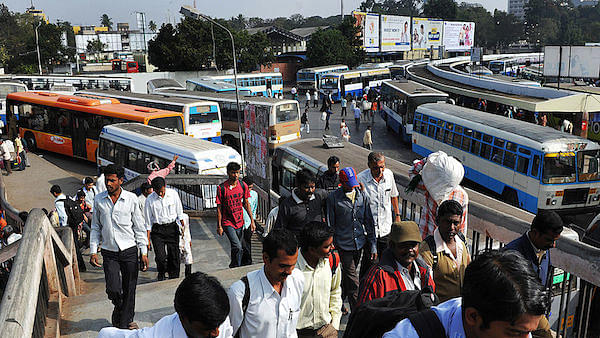 The gigantic mess in Gurugram recently, saw calls from netizens for more investment in public transport and basic urban infrastructure. The picture wasn’t that different in Bengaluru which is renowned for allowing sewage to flow into temples during the monsoon.

The pictures of the enormous number of cars stuck in traffic gridlock and the videos of people fishing on Bengaluru’s roads prompted many to ask— why don’t we have better public transport? Why do we have so many cars on our roads? Why are we so incompetent at building basic public infrastructure?.

The fiasco reminded me of Frederic Bastiat’s essay— What Is Seen and What Is Not Seen. This is how the essay begins:

In the economic sphere, an act, a habit, an institution, a law produces not only one effect, but a series of effects. Of these effects, the first alone is immediate; it appears simultaneously with its cause; it is seen. The other effects emerge only subsequently; they are not seen; we are fortunate if we foresee them.

What Is Seen and What Is Not Seen

As some of you may already know, public transport in India is mostly a government monopoly. Take the case of Haryana. The bureaucrats who run the Haryana Roadways are amongst the most incompetent ones in the business. This writer met a few of them in Bhiwadi and Gurugram to understand how they run the Road Transport Corporation of one of India’s richest states. It turns out that there is little monitoring of bus operations except assigning routes and collecting money from the conductors at the end of the route.

It is so dysfunctional that one observer remarked: “the fleet and other operational details they usually report rarely comes close to being accurate.”

Public transport facilities are better but still sub-optimal in Bengaluru. There, too, you find immense wastage of taxpayer money, bad route allocation and fishy bus purchases. A large number of important routes are unconnected by public transport.

The biggest reason for this is that public transport in India is almost entirely a government monopoly. Though Finance Minister Arun Jaitley announced, in the 2016 Union Budget, that the Central Government would attempt to deregulate this sector by creating a framework that states can adopt, there has been little sign of this framework coming out.

Whatever innovation new companies like ZipGo or Shuttl tried bringing in the sector was pushed under the radar by the Transport Departments of Karnataka and Haryana. When the Kejriwal government tried to implement a fairly decent improvement in the form of app-based premium bus services, the opposition cried corruption and the public latched on.

The Ministry of Urban Development’s report on Indian Urban Infrastructure and Services, released in 2011, has some interesting data to offer. Public transport in urban India has a total market share of only 22 percent compared with 49 percent in lower- middle income countries like Venezuela and Philippines. Upper-middle income countries like South Africa and Brazil have about 40 percent of their urban transport needs met by public transport.

A rational person would expect that this chronic underinvestment in public transport, due to government regulation, would lead to significant private overinvestment in personal modes of transport like cars and bikes. Unsurprisingly, that is exactly what has happened with two-wheeler ownership being higher in 11 of 12 cities in India than in similar middle income Asian cities as of 2008. As of 2016, the gap has most probably increased, given increasingly higher rural to urban migration and no change in public transport regulations.

It is pertinent to remember that two of the reasons for passing those Road Transport Corporation laws in the 1950s— which were followed by progressive nationalisation of the bus industry— was increased efficiency and public benefit. The policymakers of those days might have seen the initial “benefits” of such an action— artificially low fares and increased bus ridership, and might have also been convinced that they were correct in making such a decision.

What they had not seen was the progressive trend towards underinvestment in the bus transport industry, and the deterioration of the quality of service and profitability of these services. Another impact they had not seen was the biggest externality of a badly functioning public transport system— a massive increase in car and bike ownership in India’s cities. Even if they rush to reform i.e. deregulate this industry, it will still take 10 to 15 years for most of the externalities to go away.

Similar policy blunders are sadly being repeated in the taxi industry, especially in the case of the taxi-aggregators. States like Karnataka and Delhi have been pioneers in harassing the industry by putting in byzantine rules and regulations. Only bureaucrats seem to understand how they are implemented, given that there is so little clarity on the same. Surge pricing is banned. Price caps have been instituted. New driver requirements put in place. Requirements for a taxi meter also put in place. This is all with very familiar lines of reasoning— consumer protection and levelling the playing field.

There is a predicted reduction in car ownership due to apps like Uber and Ola. A study shows that users of such services are not that keen to purchase cars anymore. Elsewhere, a year-long study is underway in University of California, Berkeley to establish the same using data on actual purchases. Another study, which measured car share programs and its effect on car ownership and long-term travel demand, showed how 29 percent of car owners had ditched one or more cars within four years of the introduction of a car share program in the San Francisco Bay Area. Higher car ownership has long been known to cause an increase in travel demand and, thus, lead to higher levels of congestion and pollution.

While there have been many doubts about how large the effect on car ownership these apps will have, it’s become increasingly apparent that there will be an impact. Many readers might know people above the age of 25 who have postponed their decision to buy a car because Uber and Ola have made commutes easier than, say, bus transport.

Increased mobility of the city’s residents increases the size of the labour market for businesses operating within cities. Maintaining mobility in cities requires a well- functioning transport system that enables efficient movement of goods and labour within the expanse of the city.

However, no matter how much you try and however you fund it, bus and metro transport cannot provide last mile connectivity.

This has an impact on the real estate market, too. Apartments in areas unconnected by public transport find fewer buyers. In Gurugram, a group of realtors requested the Haryana government, in November 2015, to provide public transport in new areas precisely for this reason. If they had tried running a private service, they would, in all probability, have run into regulatory difficulties.

The need for last mile connectivity in India is higher than elsewhere as distorted land markets have ensured that the length of the last mile commute is longer than elsewhere. Auto rickshaws and taxi aggregator apps fill in this gap. Even if such apps don’t have that big an impact on car ownership, they have significantly helped increase urban mobility.

In fact, it increases the size of the taxi market in cities which it operates in. A study in Portland, USA found that the size of the entire for-hire market grew by about 60 percent within four months of these apps entering the city. More entry barriers for such an industry will increase the cost of operation. If governments go as far as Karnataka in pursuing such regulations, it might just ensure the exit of such apps and, thus, negatively impact mobility in such cities.

Anti-surge pricing regulation, strange metering requirements and price ceiling regulations might seem to be consumer-friendly to some people. Fewer people cribbing about surges on Twitter and Facebook will be seen by policymakers and Transport Department officials as evidence of them having made the correct decision. What they have not seen is non-availability of Uber and Ola cars during stress periods (like the recent rains) and slightly slower expansion into smaller Indian cities, thus, ensuring that poorer cities continue to have bad transportation systems.

What we can foresee is higher transport expenses for urban commuters when these apps begin passing on the higher operational costs to consumers.

Do remember that many of the same people clamouring for better public transport, after the seasonal flooding of Gurugram and Bengaluru, had earlier demanded an end to surge pricing. Some of those from Gurugram, Delhi and Bengaluru who were saying that that “the number of cars in our city is too damn high” were more than alright with the stringent rules and regulations imposed on taxi aggregators by Delhi, Haryana and Karnataka. And, because these are seen as the beliefs of the median voter in such cities, politicians and bureaucrats will continue to make policies which will ensure our commutes remain uncomfortable and difficult.

Why The Future Of Urban Transport Is The Bus, And Not Necessarily The Metro