Why Are Government Schools In India Losing Millions of Students Each Year? 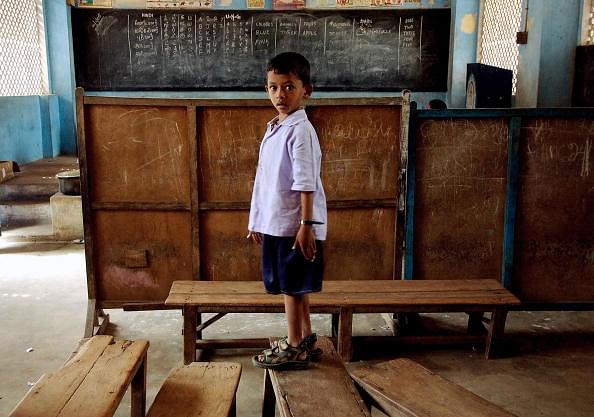 A government school student stands on a bench in his classroom. (SEBASTIAN D’SOUZA/AFP/GettyImages)

In the year 2010-11, an amount of Rs 486 crore was spent on teacher salary expenditure for 4,435 government schools. The number of teachers for all these schools was in excess of 14,000. The collective number of students studying in these 4,435 schools was, however, zero.

Across five years, from 2010 to 2015, the government spent more than Rs 1,000 crore for schools that had no students. The teachers were being paid salaries for classrooms that did not host a single pupil. The state, for years, had squandered money for empty classrooms. Not only were the skills of the employed teachers wasted, there was no effort to contain the existing and growing number of empty schools by the various state governments.

Sadly, this is not even the tip of the iceberg that is slowly sinking the ship of government schools in India. As these schools suffer from poor learning outcomes, as witnessed from the derivations of National Achievement Survey-2017, they also find themselves competing against private schools.

When it comes to learning outcomes, the private schools aren’t significantly ahead of the government schools. In the case of the latter, the learning outcome report from the National Achievement Survey of 2017 shows that students’ performance declines from classes III to VIII in critical subjects like mathematics, sciences, and languages. Flawed, yet the implementation of ‘Right to Education’, midday meals, and state incentives were supposed to increase the enrolments in government schools.

In this report, we derive data from ‘The Private Schooling Phenomenon in India: A Review’, a report by Geeta Gandhi Kingdon, IoE, University College London and IZA, March 2017.

However, the situation in populated states like Maharashtra, Madhya Pradesh should not be looked with much concern, if the absolute numbers are taken into account. For instance, Uttar Pradesh and West Bengal lost 3.08 million and 2.29 million students respectively. However, the total students enrolled in Uttar Pradesh and West Bengal at the end of 2015-16 was in excess of 19 million and 13 million, more than five times the number of students they lost. Indeed, an underlying shift from government to private schools prevails in these states, but the current population is able to absorb them, thus making quality education indispensable in government schools.

The concern, however, lies in the student number in some of the government schools. In the year 2010-11, almost one-third of the schools had less than 50 students. With over a million government schools in existence, the number of such schools can be estimated to be around 350,000. In 2011 alone, the teacher-salary expenditure for schools with less than 50 students was in excess of Rs. 21,000 crore. By 2015-16, the percentage of such schools swelled to 40 per cent of the total number and the expenditure more than doubled to Rs 48,340 crore!

Taking the social factors and geography in play, consolidation is not always a feasible option for government schools. Even the number of teachers for each student remains mismanaged. For instance, in 2015-16, schools with less than 20 students had two teachers for every one school. Clearly, the lack of skill and subject expertise is felt in such schools, given a teacher cannot be expected to have expertise in all the subjects, and hence, often, it is the students that suffer. The National Achievement covered less than 10 per cent of the government schools, and thus with such imbalance in student-teacher numbers, expertise, and infrastructure, the learning outcome report’s findings can be assumed to be even more depressing.

What’s worrying for the government is that even though the number of teachers in schools with zero students has gone down by 7,000, the percentage of such schools increased by 20 per cent from 2011-2016. The number of schools with five students or less increased by more than 33 per cent, with 10 or more students increasing by 50 per cent, with 20 or more students increasing by over 50 per cent. Clearly, the states have not only tremendously failed in keeping a check on the growing number of small government schools, they have also not been able to consolidate them in areas like Uttar Pradesh, Bihar, Madhya Pradesh, and Maharashtra.

Any school is as good as the teachers in it, the administration running it, and the government sustaining it. For government schools in urban areas, the numbers might offer some hope, but for the ones in rural areas, even the ones without any student, there is an urgent need to eliminate the grey areas. The teachers must be given a classroom full of students to work in, not empty walls.

The attendance, performance evaluations, promotions to senior classes in all these small schools are questionable, for how can any government school with less than five or 50 students evaluate its teaching methodologies? For the government, the solution lies in looking at consolidation wherever possible, using big-data to understand school accessibility across India, and evaluate learning outcomes for all these small schools in order to understand the impact of such schools on students, and for course correction. Given that the private schools are still a long way from inculcating the majority of the student population, young India’s best hope, even today, remains in government schools.