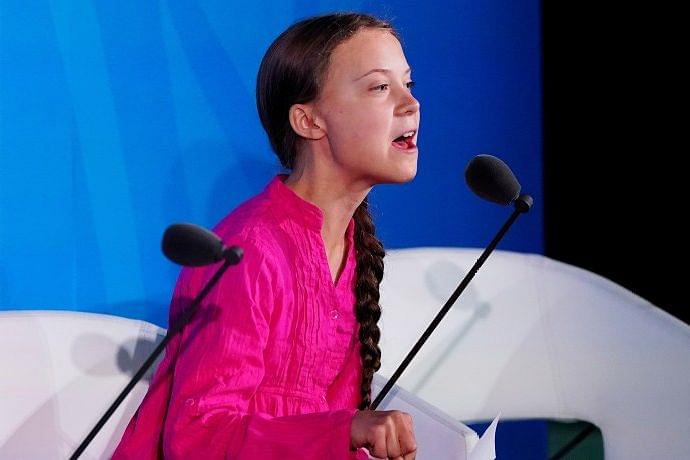 Back in 2017, noted filmmaker Shoojit Sircar sought a ban on children participating in reality shows. Seeing how such shows tended to exploit children, I was among those who agreed with Sircar back then.

Earlier this week, as I first watched Swedish teenager Greta Thunberg, a climate-change activist, scold American lawmakers, and then a cute toddler holding a placard in the ‘Save Aarey’ protests, I asked myself how was this different from reality shows?

The west has been praying at the altar of what the late comic genius George Carlin used to call ‘child-worship’ culture for some time now, and political operators have been benefiting from it.

Lately, we see this trend emerging in India too.

For the sake of the children as well as for the important issues at hand, this practice of emotionally blackmailing your political opposition using children as protestors/representatives must be stopped.

A few months ago, an altercation between Dianne Feinstein, the octogenarian senator from the state of California, and a group of impertinent teens asking her to just sign the new green deal, had gone viral.

Those who wish to understand the problematic nature of using children in political protests would do well to watch the clip.

Their obvious lack of capacity to form consent apart, children by their very nature are stubborn, self-involved and less amenable to reason. They lack the emotional maturity to understand the value of listening to the other side.

These are great traits if you think bulldozing your opposition into submission is fair game. For the reasonable person striving for consensus, however, these are undesirable traits in a counterpart.

Psychologists talk about ‘empathy blind spot’ exhibited by even otherwise well-adjusted children. Empathy blind spot happens when the child decides that certain people’s feelings don’t ‘count’ and thus feel justified in being mean to them.

An activist child is conditioned by adults coaching him into developing this empathy blind spot for an opposite point of view.

In such a situation, can you really hope for the child activist to listen to an opposite point of view?

There is a moral side to this debate too that cannot be ignored. Having a child as your debating opponent has a chilling effect on dissent. Just think: who would want to rebut a cute, personable 10-year-old asking that mother earth be saved? Just how do you hold your own without coming across as heartless and mean?

The adult’s concern about coming across as a bully, coupled with the natural tendency of children to throw tantrums to get their way, would ensure a virtual walkover to the side fielding a child activist.

And then, there is the issue of skin in the game, or more specifically, the lack thereof. Legally and socially, a child is not held accountable for the consequences of its actions. That is precisely the reason why even the Supreme Court held that parents need to pay for minors causing accidents.

Since such a line of liability is impossible to establish in case of activism, the activist child has no skin in the game. Children are more likely to be stubborn and intolerant of an opposing view-point, and in any case, the lack of skin ensures that they have no fear of the downside that might act as a deterrent.

People supporting child activists often counter the above by saying that children are our ‘future’ and hence they should have a ‘say’ in it. Both parts of this argument are problematic.

The first part implies that as children are the future, their concerns should supersede those of the adults. This is age-discrimination, pure and simple. Asking adults to make real changes today to allay the imaginary fears about the children’s future is terribly unfair on the adults.

Children having a ‘say’ due to the ‘future’ impacting them implies that having a stake automatically confers competence to understand the nuances of the issue. A sick child has a very high stake in medical treatment, but does that mean the course of treatment should be dictated by that child?

How does a child’s natural inability to grasp consequences get nullified by an issue that can impact its future?

Let’s not forget that such activism is, perhaps, most unfair on the child itself. Without exception, a crusading child has an adult coaching her in order to build her opinion, and then introducing her to various platforms to make her voice heard.

In short, the child sees the world the way the adult wants it to. Isn’t putting a child as the face of essentially the adult’s opinions merely a sophisticated version of stone-pelters using children as shields?

In an age where opinions are stored forever, everyone from the Supreme Court nominees to Prime Ministers, and from Oscar hosts to students seeking admission to Harvard, are held accountable for their past actions and opinions.

Do we really want to create a generation of adults who will have to constantly worry about their past opinions resurfacing in public discourse at the most inopportune time?

The child is incapable of grasping the longevity and magnitude of the impact today’s actions would have on its future. Isn’t it the responsibility of us adults to stop them from creating this monster?

When I was 19, a friend loaned me his copy of Ayn Rand’s The Fountainhead. For a couple of years after that, I was a big fan of Rand’s philosophy and her repulsive protagonist Howard Rourke.

When I look back to that period, my admiration of that book shocks me more than the contents of the book itself. I have the adults of my generation to thank for not letting me impose my myopic world-view as solutions for the economic problems of the real world just because I was their ‘future’.

Trust me kids, Howard Rourke would have been hard to live down.