20 Years Of The WAP7: How This Star Locomotive Of Indian Railways Was Brought Back From Certain Death 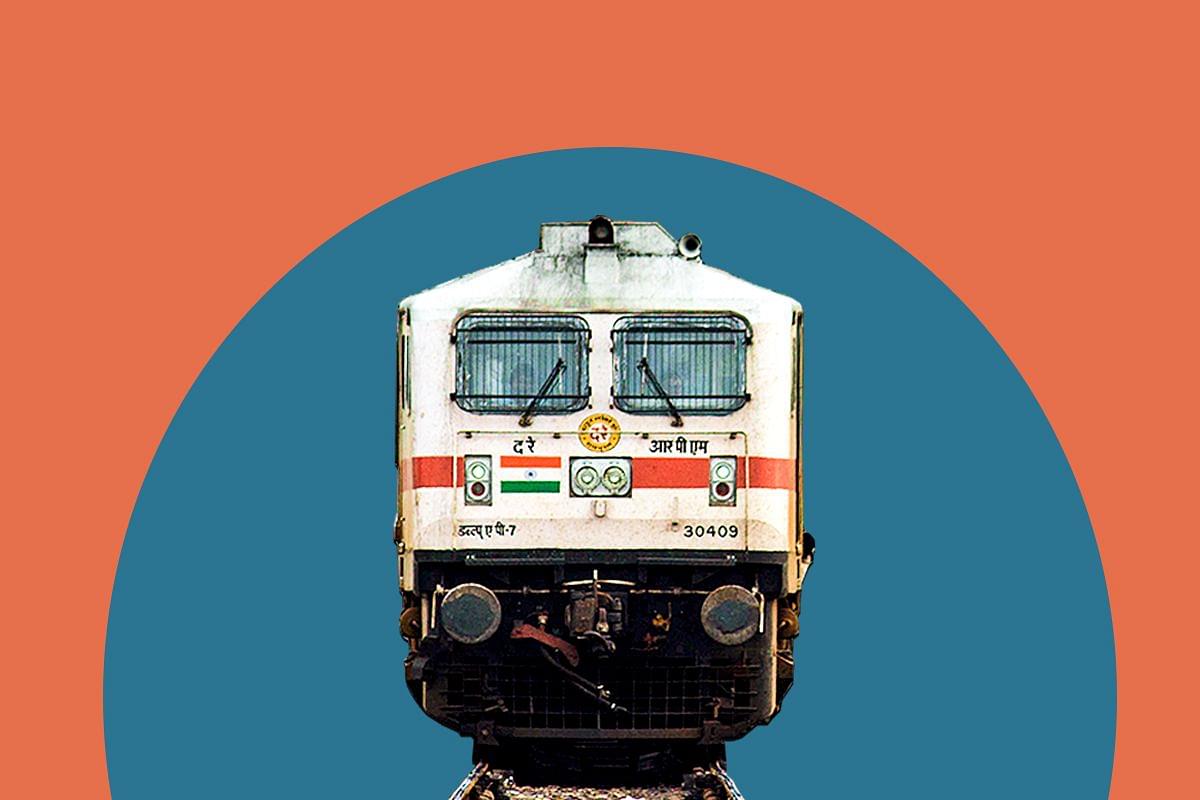 On 10 May 2000, a 6,000 hp, passenger locomotive of the WAP7 Class, was flagged off by the then Union Minister for Railways. This locomotive had been indigenously adapted from an imported freight locomotive, WAG9.

The flagging-off ceremony was the culmination of an audacious experiment of the Indian Railways (IR).

Today, this locomotive is a flagship passenger locomotive and can also serve on high speed premium freight trains, an emerging category of business by itself.

As part of the core team which worked on its design, the author reminisces the challenges and shares here the exhilarating success of this locomotive.

Indian Railways signed a contract in July 1993 for the transfer of technology for a 4 MW high-speed, passenger, and 4.5 MW freight locomotive, with the then M/s ABB (Transportation Division), Switzerland.

The contract mandated the supply of some fully assembled locos and some locomotives in the CKD/SKD form along with the necessary technology transfer to manufacture them at the Chittaranjan Locomotive Works (CLW), Chittaranjan, West Bengal.

Mood Of The Times

This was the era when big ideas and plans were being talked about in government circles. The road and telecom networks were undergoing massive upgrades and India had just gone nuclear.

These were the days when IR dreamt big of speeding up its network as it sought to meet the challenge of defending its modal share.

In our presentations, we started talking of building locomotives for heavier, longer, and faster trains.

The Prayagraj Express between Allahabad (Prayagraj) and New Delhi became the first train to have a 24-coach composition, making IR evaluate possibilities to give all long-distance trains 24 coaches.

This composition was run on the imported WAP5 class of 4 MW locomotive (about 5,400 hp on wheel).

The then frontline locomotives, the 5,000 hp machines, had the conventional DC drive. These had to sacrifice power to achieve higher speeds. Operationally, it translated to lower acceleration at higher speeds.

So, the question was how to make 24-coach-long trains run at higher average speeds even on graded sections of the then Central Railways’ route of Delhi-Bombay (Mumbai) and on ghats of the Eastern Railways’ on the Delhi-Calcutta route (Kolkata).

In the meantime, on 14 November 1998, based on transferred technology, the first 4.5 MW (6,000 hp) freight locomotive of the WAG9 class, christened as Navyug, was turned out by the CLW.

Be it RDSO, Lucknow or Rail Bhawan, the mood was electric, as we became the second country in Asia to have done this (after Japan). The frontline team for the project was led by a soft spoken, down-to-earth, legendary engineer, V Sadasivan. His team consisted of a handful of young engineers.

The guru, Sadasivan, grew fond of this rookie, unmarried engineer, your chronicler, and took him under his wings.

The 4 MW WAP5 class locomotive, on which the 24-coach Prayagraj Express was then running, was received as part of the contract with the Swiss company. This gave more power than the flagship WAP4, but it was geared for 160 kmph passenger operations with capability to go up to 200 kmph service speed, which compromised its accelerating capabilities on longer trains working at lower speeds.

Also, this had four powered axles, two less than the WAP4.

So, even though it had more power, we discovered that a Purva Express running on a more powerful WAP5 lost time vis-a-vis running on WAP4 (which had lower power) -which is quite counter-intuitive.

We needed something on six axles delivering 1,000 hp on each axle at a maximum operating speed of 130 kmph, the speed of Rajdhanis and Shatabdis.

Thus was born the idea that we could reconfigure a six-axle freight locomotive from the WAG9 class, Navyug, and make it work for 130 kmph service.

This locomotive, if and when built, would be of the WAP7 class.

The challenge of course was, how?

Earlier, such reconfiguration was limited to essentially changing the gear ratio and designing new gears. But now, what we had were computer-controlled locomotives with multiple tiers of control which needed reprogramming.

Though IR’s engineers were being trained in Switzerland to handle the software for the WAP5 and WAG9, the source code for the same was not with IR and was being offered to us at a hefty price.

The Swiss company had deemed its transfer outside the scope of its contract.

It was sheer genius on part of Sadasivan that he not only negotiated for this software at zero cost but got it too.

Now we had the software, but the proprietary development tools were based on a German version of DOS, and we had to figure out its installation on our computers.

It took a bit of ingenuity and ultimately we could install it on the computers at CLW in a newly created lab (in a storeroom) which we named as the Traction Software Development Lab.

Having access to PCs was a challenge and given its geographical location, access to Chittaranjan itself was also a severely limiting factor.

Next in the line of challenges was to take out printed copies of the code which was graphically written.

I recollect the eureka moment when we could manage to take the printouts!

Making something like what we were trying to, was deemed outside the scope of the Swiss company’s contract. So it was supposed to be solely IR’s project. But as good will, an engineer who documented and later upgraded the software, was informally attached to this author to answer specific queries (but which were not binding on him to answer).

Now, we had to hunt for changes that had to be made in the software.

Part of the identified software was in German. Line by line, dependencies were seen and changes identified.

This was the time when Microsoft Excel had started making its presence felt, and so we had an easily accessible calculator in it.

Having identified the changes to be made, the software was modified and the downloadable files generated.

Now, we were itching to test the software.

For that, we needed a working WAG9 locomotive, as there was no simulator available.

And here was the risk. The required fleet essentially consisted of under-warranty locomotives and who would have been accountable if something went wrong with them and that too with a rookie engineer tinkering at the helm?

It was then that the visionary head of CLW, N K Chidambaram, ruled in favour of this author.

People turned to Sadasivan to get reassurance, and he okayed the scheme as well.

The plan was to test the software in a WAG9 freight locomotive available in Gomoh (the place from where Netaji undertook his historic train journey in 1941, escaping police).

Going to Gomoh from Chittaranjan was itself a challenge those days and the journey took four to six hours at times.

As part of the ongoing Golden Quadrilateral project, the GT Road was completely dug up and the stretch after Dhanbad (Topchanchi area) was Naxal infested.

Paying through training budget, the amiable Swiss engineer was engaged and he accompanied me to Gomoh, where I downloaded the WAP7 software in a working WAG9 class of locomotive and carried out our trials in the yard.

The whole exercise was designated as a training exercise being carried out in the services of IR, with the IR agreeing not to make any warranty claims and also take responsibility if something went wrong.

Now, we had to wait for an actual WAP7 to be turned out and be available for trials.

After we had tested the code on a WAP7, this locomotive was pressed into service.

The then Minister of Railways, Mamata Banerjee, flagged it off on 10 May 2000.

This locomotive was fondly named, Navkiran.

When Navkiran was pressed into service after trials, over sometime, it was found that the trains it hauled started losing time.

This became a cause of major embarrassment and initially we were clueless as to why this was happening.

We conducted numerous trials. The stopwatch did show loss of time, though the computers reported tractive efforts which should have made accelerations much higher.

So, if Newton was right, and if the recorded data was correct, there was no reason for the trains to lose time.

Meanwhile, the chorus grew louder in IR circles that the project was undertaken without necessary prudence.

A test scheme was thought out. We decided to haul the Prayagraj Express first with a WAP5 and then with a WAP7 and compare the results.

It was over a bowl of Maggie, of which Sadasivan was an exponent, that the penny dropped.

I realised that the measured results consistently followed the ratio of the gear ratios of WAP7 and WAG9. This meant that somewhere deep in the software, where we did not have access, the gear ratio of WAG9 was coded.

This quirk meant that the actual delivered traction forces were less than what was reported by the computers.

By the time we finished the Maggie, we came with the idea of bluffing the layer which was acting cranky and by late that night, the control software was ready.

We got a WAP7 moved to Allahabad.

I reached Allahabad by the Purva Express with a trusted assistant, Sankha Sinha.

We wired up the WAP7, and reconfigured it to the new software.

We were so confident of our solution that we pushed the locomotive to deliver 353 kN (kilo Newton) instead of the standard 323 kN.

This was my little secret.

Having readied the loco, we had it placed to haul the Prayagraj Express on the evening of 23 July 2002.

Our trial methodology was simple. We asked the driver (now called a loco pilot) to come on the mainline, stop, and then go full throttle to a maximum speed of 110 kmph.

We would record the data on ramshackle equipment with a broken screen.

The driver placed the train on the mainline and we started our stopwatch with a pad in hand.

The driver took 100 per cent throttle.

He was used to it taking more than five minutes to reach a speed of 110 kmph with the regular WAP5 (322 seconds).

Earlier, it had taken 390 seconds on the older control software of WAP7 to reach the same speed. We were staring at certain death of this new class of passenger locomotive, so to speak, if we could not improve upon this.

Sankha and I looked at each other, and each of us, while completely silent, was screaming “we did it!” inside.

The driver politely commented that we were accelerating unusually faster. Perhaps that was his way of complimenting us.

This would have been a record acceleration of a passenger train of IR.

The rest of the journey to New Delhi was routine recording.

This trial finally validated the wild idea we had regarding WAP7.

WAP7 was thus saved from being guillotined.

Today, the WAP7 is the flagship passenger locomotive of IR, with more than 1,000 in service at a total investment of almost Rs 15,000 crore.

In a push-pull mode, where one WAP7 pulls at the head of the train and another pushes at the rear end, all existing trains can be speeded up, as few Rajdhanis already have.