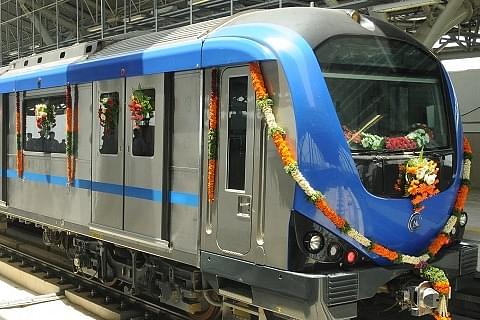 For the Chennai Metro to be profitable, market-driven fares are the only way out.

For an average commuter, paying Rs 40 for a trip on Mumbai Metro from Versova to Ghatkopar would seem normal. Similarly, for a commuter in Bengaluru, Rs 60 from Nagasandra to Yelachenahalli too wouldn’t be too much. However, commuters in Chennai are extremely reluctant to pay Rs 60 for a journey from Chennai Central to St Thomas Mount.

A public interest litigation (PIL) has been filed in Madras High Court demanding that the fares of the metro be brought down on a par with the fares of suburban railway services operated by Southern Railway. The court, however, should not give in to the demand and for a good reason too.

The PIL explicitly makes a comparison between both suburban rail and metro rail fares, comparing Chennai Park-to-Tirusulam on the suburban network, to Chennai Central-to-airport on the metro. The suburban fare for second class is Rs 5 and first class is Rs 80, while the metro fare is Rs 70. However, the distances are different. The former is 18km, while the latter is 26km.

Suburban railway fares in India, especially for second class category are abysmally low. Given the massive expenditure they incur for the Indian Railways, and the cheap fares, they are – while certainly not a white elephant – in a way a financial burden on the whole railway network.

There are major differences between suburban rail and mass transit as far as India is concerned.

Suburban rail systems carry larger volumes of people over longer distances. Thus, trains are longer in length, the route itself is longer and the distance between stations is greater. The western line on the Mumbai Suburban Railway has 37 stations across 123 kilometres. In comparison, the longest line on the Delhi Metro – the Blue Line – has 44 stations across 50 km.

Another distinct feature is that MRTS has more advanced technology, better quality of transit, and more importantly air-conditioned (AC) coaches, which is a crucial distinction in cities such as Chennai and Mumbai. If metro fares are to be brought on a par with suburban rail fares, ideally it should the same as those on AC local trains, which are higher than metro fares.

All metro rails, by virtue of the investment in them, are different from suburban rails.

The Chennai Metro alone cost over Rs 20,000 crore as per 2014 reports and the cost of purchasing the rolling stock alone (from Alstom) was Rs 1,471 crore. Tunnelling alone cost Rs 300 crore per kilometre.

Why Are Chennai Metro Fares At Their Current Range?

With such high investment, the Chennai Metro Rail Limited (CMRL) needs to start recovering its cost of investment. Only then will it be able to maintain the system well, failing which it would fall into disrepair, becoming like the existing Chennai MRTS.

While CMRL hasn’t stated the expenditure it incurs in operations, a rough estimate can be made. Reliance Infrastructure-led Mumbai Metro One Private Limited (MMOPL) that operates Line 1 in Mumbai has stated that it costs them Rs 55 lakh per day to operate and maintain the 12 km elevated line. One can estimate how much more CMRL must be incurring for 35 km of elevated and underground lines.

In the case of the PIL filed in the court, one can simply state that for those who don’t want to pay for the metro, there are plenty of alternatives, including the suburban rail and buses operated by the Metropolitan Transport Corporation (MTC).

The Court Should Logically Not Entertain Such Matters

The judiciary exists to interpret the law and apply it. As such, fares aren’t within the confines of such matters. The Madras High Court does not operate the Chennai Metro and by this reasoning, it should ideally stay clear of such issues. Fares are meant for the operator and at most, the executive, to decide based on operational costs, revenue inflows and other factors. In fact, the Bombay High Court pulled up the Mumbai Metro Rail Corporation (MMRC) for "construction of the metro” because it was “ruining the city’s image”. Given how slow things are in our country, bringing in the judiciary merely makes this worse and thus such matters need to be out of the purview of the courts.

The PIL itself was filed purely on the basis of the fact that Tamil Nadu is a highly populist state. Populism in the state affects every aspect of life including public transport.

While other parts of India made numerous fare revisions to keep up with inflation, fuel prices, maintenance costs, etc, Tamil Nadu did not revise its bus fares even once between 2002 and 2011. Post the fare revisions of 2002 under the J Jayalalithaa-led All India Anna Dravida Munnetra Kazhagam (AIADMK) government, the 2011 hike came in when she was re-elected. The five-year long Dravida Munnetra Kazhagam (DMK) government headed by M Karunanidhi did not revise the fares for buses among other things including milk and electricity tariffs.

Thanks to this lack of fare revisions, the cost of bus tickets went up as much as 90 per cent in 2011 causing an uproar. A similar uproar happened last year when the Delhi Metro Rail Corporation revised its fare for the first time post-2009, resulting in the maximum fare going from Rs 25 to Rs 60.

Another side effect of the low fares is that while other parts of India started upgrading their public transport, Tamil Nadu had poor quality of buses and instead of buying newer ones, went in for refurbished ones. Taking stock of this, Chief Minister Edapadi K Palaniswamy decided that a fare revision was in order at the start of this year but was forced to roll it back under intense pressure from the public and the opposition.

Chennai contributes to 14 per cent of India’s information technology (IT) and IT-enabled sectors (ITES), and 40 per cent of the automobile sector. It is certainly not a poor city and ranks third among Indian cities in terms of GMDP per capita.

While CMRL can consider reducing fares to attract more people, it needs to remember that doing so will make it unviable for operations. Alternatively, it can consider doing what Mumbai and Gurgaon did by leasing out commercial space and generating revenue through advertisements, but given the scanty footfalls it currently sees, this might not find takers.

The problem Chennai faces is a mindset problem created due to the successive governments doling out freebies to the people.