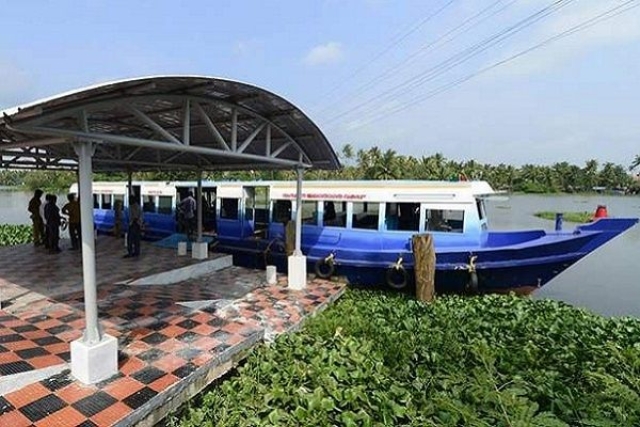 Last week, the Union Ministry for Environment gave its clearance for the Rs 891 crore Kochi Water Metro, the first such transport project in the country.

The water metro project’s objective is to connect islands around Kochi with the mainland. The project will be implemented by the Kochi Metro Rail Limited (KMRL).

Things are moving fast for the water metro project with the KMRL appointing Holland’s Antea Nederland BV and Unihorn as consultants for concept design, detail design and supervisory services of the Integrated Urban Regeneration and Water Transport System (IURWTS) Project a couple of days ago.

The growing recognition in recent years of climate change has led to a renewed interest to invest in waterways and enhance connectivity in the region.

According to the Indian Council for Research on International Economic Relations (ICRIER), the port city of Kochi is characterised by crisscrossing rivers and canals connected to a backwater system.

The Kochi city is situated in a complex estuarine system comprising Lake Vembanad and rivers such as Periyar and Muvattupuzha that flow into the lake. A sizeable portion of the land is covered by sheets of water comprising canals, backwaters, and rivers in the city.

Thus, a water transport system assumes significance as it can not only offer multiple benefits but also be one that is cheaper to develop, manage and maintain.

ICRIER says that the cost of creating inland waterways is only 5-10 per cent compared to expenses in developing a four-lane highway. Maintenance costs are also roughly one-fifth compared to that of a highway.

The financial capital of Kerala has been facing problems of unplanned development and the share of water transport has dropped significantly from 23.4 per cent in 1981.

At least 50 per cent of the people who visit Kochi every day go there for employment, with some of them coming from at least 25 km away. While buses are the most preferred mode of transportation, narrow roads and congestion result in the average travel time exceeding more than an hour.

It is in this context that Kochi’s waterways present an alternative mode of transport and can help decongest its choked roads. It can also reduce travel time drastically.

Currently, the Kerala State Water Transport Department operates a few ferries along with some private operators connecting the western coastal areas with the city. But this covers hardly three per cent of the commuter traffic in the city.

While the KMRL will result in a 30 per cent shift from roadways to the metro rail, it does not extend to the islands that are densely populated, contributing large numbers to inter-city travel.

It is here that the water metro project can step in and work in tandem with KMRL to provide cross-modal connectivity.

The water metro has identified 16 routes connecting 38 docks across 10 islands with the total network likely to be 76 km.

The project is planned to be implemented in two phases. In both phases, the water metro project will not only build on the existing routes but also extend some of them.

To ensure better planning, coordination, and maintenance of services, KMRL has proposed the setting up of a Unified Metro Transport Authority for the metro rail and the water metro.

Once the water metro comes up, Kochi will likely be rid of the traffic congestion it witnesses now.

Developing Kochi’s hinterland connectivity through inland waterways will result in an annual economic benefit of Rs 442 crore, according to the National Transportation Planning and Research Centre.

The water metro will also boost tourism and be the key to the development of the Kochi-Alappuzha backwater belt. Besides, it will help Kochi to safeguard itself from events like floods that impact its economy badly.

The first phase was scheduled to have begun in April this year but the project got delayed. With the water transport metro now getting the green nod, it could be up and running by this time next year.