India At 70: Why Indian Railways May Be Going Through Its Most Transformative Period 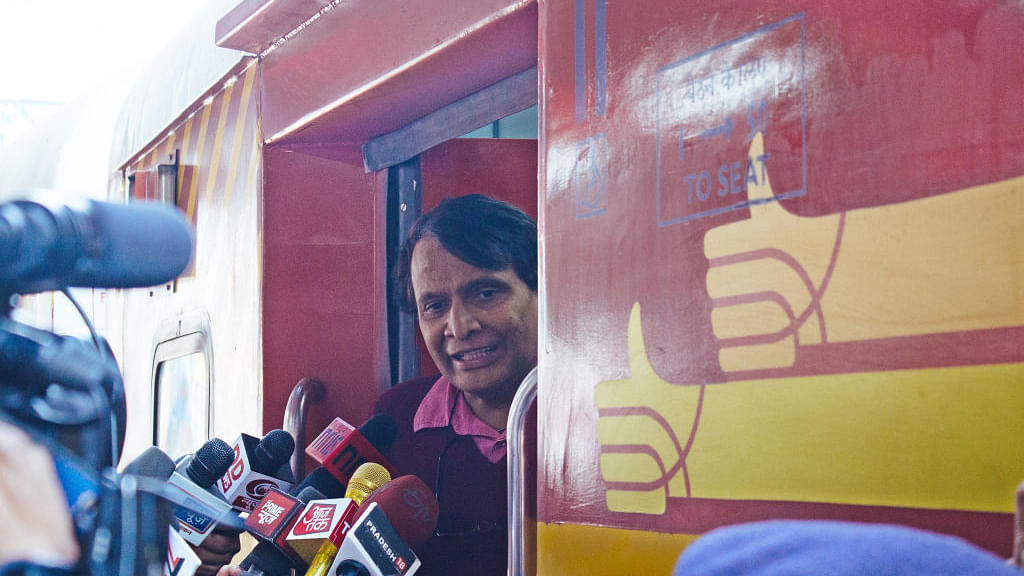 Railways in India were built by the British and the maharajas. Interesting snippets on railways in India, and their history, can be seen here and here. Indian Railways – with its organisation and structure – as we know it today was sculpted 1950 onwards. This was done by bringing together various systems which were inherited post Independence and Partition.

As India completes 70 years of Independence, Indian Railways symbolises its state where its intent to reach the stars is met with a broken system. From the side of the citizens, they get the ‘touch and feel’ of modern railway solutions in several metro railways. This readily brings out the saliency of what they have been missing in the mainline railway system in India – well designed functional stations, rolling stock, ease of use, punctuality, etc.

It is amusing to note that China and India, till barely two decades ago, were at similar levels in railway technology. In fact, India had a distinct lead in some areas over China. The accelerated rail reforms and the subsequent growth of railways in China is a classic case study of how a country can gate crash in to elite club of railway industry and also, how the engineering component of railways can be leveraged to generate high quality jobs and IP.

Today, India sends hundreds of its people to study the Chinese railway system and be inspired.

Since its formation, Indian Railways has seen about 1.5 times increase in track km, 2.5 times increase in wagons, three times in coaching whereas its freight output increased by 12 times and passenger output by 18 times. This amply illustrates that on frugal inputs, incrementally grown assets delivered major gains in output. Moreover, the Indian Railways has been delivering on its socio-economic mandate largely on the strength of its own earnings, What with social obligations outweighing the economics of operations for almost its entire existence.

This resulted in an interesting bias that resulted in freight rates of Indian Railways being one of the most expensive in the world, and the average passenger fare being among the lowest. Excessive focus on earning from commodity haulage where the Indian Railways enjoyed natural monopoly, socialist policies and, infrastructure, made Indian Railways unsustainably dependent on single commodity for freight – coal. Coal comprised nearly two-thirds of its freight haulage.

Serving an economy which had a socialist bureaucracy running economic policy, shielded Indian Railways from any competition. On the other hand, the same reasons also threw before it a poorly structured market. Key client sectors like power, mining, agriculture have been beset with their own structural infirmities. Railways, in comparison to state-run power and mining departments, scored better due to its disciplined organisation. This also accorded to it a certain smugness.

So over decades, the managerial outlook of Indian Railways developed in the context of a lack of market exposure and inefficiently organised client sectors. Successive decades of this bias in priorities changed the very DNA of Indian Railways. Improvement in passenger services was subordinated to the need to run trains carrying bulk freight.

Internecine battles between the many organised services which comprise Indian Railways’ executive management at times border on fratricide, as the is wont of bureaucracy. However, this is a natural organisational disease in moribund systems.

Many of the issues highlighted above were clearly beyond the reach of Ministry of Railways, which essentially has been a service Ministry. However, post 2014, the key defining feature of the ministry has been its attempt to reboot the entire economy.

What helps the railways is that key client sectors, like power and mining could not have been more different. Thus, Indian Railways, suddenly looks anachronistic in a very differently structured economic ecosystem.

However, the biggest challenge to Indian Railways remains its sheer dependence on coal-something which even policy planners failed to diagnose. The National Transport Development Policy Committee, convened by then Planning Commission, after four year of deliberations delivered the India Transport Report, submitted in January 2014:

Within a few months of the formation of the Narendra Modi government, a major course correction was done to diversify the basket of primary energy sources for electricity. Aligning India with the global thought on green energy, coal, naturally was not a favoured option for the government, even in short term. The new government’s focus to bring in sectoral efficiencies by breaking down silos in government meant that bold decisions could be taken leveraging India’s huge domestic market and forcing ministries to align with delivery targets.

Coal is thus, no longer seen as a major driver for electricity. The rationalisation of coal linkages meant that the average leads (distance over which coal is moved) which Indian Railways had got accustomed to suddenly started shrinking, instead of increasing (see here and here). In its attempt to provide affordable electricity, the Modi government is re-engineering the entire value chain that goes behind the watts delivered in our homes. No wonder then, that the Indian Railways, which plays its part in transporting coal, has become one of the biggest losers as the government refocuses itself on electricity provisioning instead of providing power plants. It is easier and far more economical to deliver electricity over wires than to transport train loads of coal. Investments in electricity grid have made evacuation of pit head power plants and plants close to ports a very attractive option thus eliminating the need to move coal for long distances. For existing thermal power plants, rationalised linkages ensure that the distance over which coal needs to be moved is brought down. This has not just made the lives easier for the generating entities, it has made whole process more transparent.

On the other hand, with the introduction of the GST, road transport has suddenly become more fluid. Reports talk of two days saved in erstwhile five day runs (here and here). The roll out of GST too, would prove to be a big impediment for railways to attract ‘high value smalls’, as the road sector is suddenly unshackled from extremely repressive and regressive tax regime. Earlier, the railways were the natural choice to move goods across state borders, now suddenly, roads are on the same footing.

While the railways have tried to diversify its customer base, its organisational DNA is perhaps the biggest bottleneck. Entire systems which have ossified themselves in past economic era are not nimble enough to cope with the fundamentally altered economy.

So, while earnings become a challenge, there is also a need to cut down expenses substantially and make the railways organisation fleet footed to better integrate it with the emergent low inertia economy.

@70: Changing Engines of a Flying Aircraft

How do you make a socialist beast accustomed to monopolistic market resist irrelevance?

Over the years, government added multiple organised services to run railways. These include the Engineering Services (recruited by UPSC through Engineering Services Examination for running civil, mechanical, signal and telecom, electrical and stores departments) and Non-Technical Services (recruited by UPSC through Civil Services Examination for traffic, personnel, accounts, RPF). The number of such services grew to be simply too high. Each organised service then needs its own share in scheme of things to grow, or just to survive. The Debroy committee suggested rationalisation of services. While the Ministry of Railways has begun the exercise, it is expectedly getting resisted from within. The most important rationalisation which has happened has been putting locomotives of all types under one Member of Railway Board and coaching and multiple unit stock under another member. Thus, it is hoped that soon, multiplicity of assets, like separate diesel and electric loco sheds in close vicinity, would be a thing of past. However, this change needs strong follow through and should not be the solitary one.

The electrification of railways was always considered a heavily politicised subject with turf battles over every inch of track which was put under wire. Pitched battles were fought in the files of railway board and intrepid officers roped in media with delightful stories like how one electric locomotive deprived many thousand houses of electricity. This fight was referred to by none other than the Prime Minister himself in the Rail Vikas Shivir held in Surajkund in November 2016.

As the power sector gets rewired, one finds that there is no electricity shortage in the country and the average cost of electricity has actually softened. In this backdrop, an unusually bold letter was written by Ministry of Power to the Ministry of Railways arguing for full electrification of the Indian Railways network. This set the stage to wire the complete network of Indian Railways, except lines with very low traffic. The Prime Minster also weighed in. The pace of railway electrification now gets monitored by the PMO.

Mission 41K (mission document) coming on heels of Mission Electrification, is about going straight for the jugular, so to speak. This is to tame the biggest component of variable cost by complete electrification of the railway network. These two projects would generate low to high skilled jobs for next decade by leveraging domestic market. This would be part from taming and part from rolling back the energy expenditure of Indian Railways, which is about a quarter of variable cost of the organisation. The work pioneered by Babu Jagjivan Ram as Minister of Railways in 1950s, when he pushed to get the world’s bleeding edge SNCF’s rail electrification technology, sees its logical culmination in Mission Electrification.

Indian Railways, like other wings of the government, has been beset with internecine wars between its departments. This, along with incremental actions successively created bottlenecks in mobility. For the first time, this key aspect of improving the network’s fluidity has been taken up through a multi-disciplinary effort. Though Indian Railways is a highly codified organisation, it still depends on age old processes. Use of ICT tools, it is expected, would bring transparency in all aspects of railway working. Lack of visibility led to systematic misuse of powers, whether grant of leave to junior employees in far flung areas or preparation of pension documents. Similar lack of transparency severely affects core activity too, namely, traffic handling and capacity utilisation.

Railways is essentially a heavy engineering enterprise. Its potential of innovation, value and job creation is also hig. To drive long term research in guided transportation, SRESTHA (here and here) has been envisaged with its DPR in the advanced stage of preparation. Similarly, to expedite high impact projects, a multi-disciplinary organisation called Transformation Directorate has been created.

There is no lack of initiatives, however, to eke fast delivery from a system which was set in a bygone era is not easy. Though challenges persist, it would be a monumental failure of railwaymen if they do not rise to grab the opportunity.