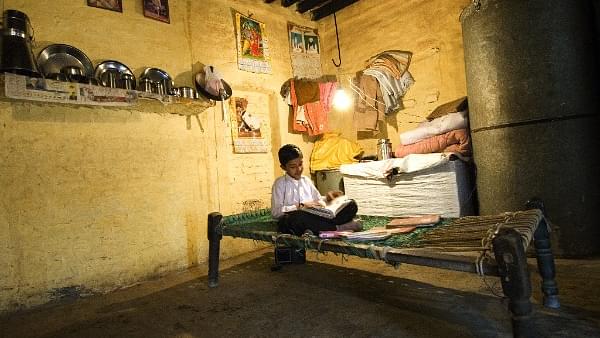 A house in rural India gets electricity for the first time. (Priyanka Parashar/Mint via Getty Images)

With elections in the offing, Narendra Modi government’s work in the last four years is under the scanner. One way the central government supports citizens in a federal structure is through centrally sanctioned and planned schemes. Here we take a look at five such schemes, through data provided by the government, and look at how different states have fared in their implementation.

Generally, north Indian states like Uttar Pradesh and Bihar seem to be doing well in implementing the key programmes of the Modi government. However, when it come to women empowerment, these states lag behind others.

The Jan-Dhan Yojana is a national mission to provide access to financial services to all. It was launched by Prime Minister Narendra Modi during his first Independence Day address in 2014.

Over 25 crore accounts were opened under the Jan-Dhan Yojana until November 2016. Uttar Pradesh alone accounted for nearly four crore accounts, making up nearly 15 per cent of all accounts opened in the country under the programme. Barring a surprise entrant like West Bengal, ruled by the Trinamool Congress, the rest of the states were from the north, which accounted for 50.72 per cent of the total accounts opened under the Jan-Dhan Yojana.

Over four lakh people were trained under the Pradhan Mantri Kaushal Vikas Yojana (till October 2016), which aims to provide industry-relevant skill training to youngsters, enabling them to secure a better livelihood. Uttar Pradesh topped the list of beneficiaries here too, with around 60,000 people receiving skill training under the scheme. Madhya Pradesh and Rajasthan are also among the top five, as in the case of Jan-Dhan Yojana beneficiaries. Tamil Nadu, which is renowned for its skilled manpower, was the odd one out in the top five.

Almost 4.5 lakh kilometres of rural road connectivity has been provided under the Pradhan Mantri Gram Sadhak Yojana with Uttar Pradesh, Madhya Pradesh, and Rajasthan making it to the top five. Odisha, an eastern state, finds a place among the top five.

Around 30,000 villages in Uttar Pradesh were lit up, thanks to the rural electrification programme. This is almost one-fourth of the number of villages that have been electrified under the Deendayal Upadhyaya Gram Jyoti Yojana (DDUGJY). A total of 115,671 villages across the country benefited under the scheme, of which Uttar Pradesh, Bihar, Jharkhand, and Odisha each had over 10,000 villages, making it over half the total number of villages electrified.

Of the total beneficiaries in the scheme, a little over one-fourth were from Uttar Pradesh, followed by Bihar, which accounted for over 21 per cent.

More than 1.5 crore women entrepreneurs have benefited under Pradhan Mantri Mudra Yojana. Unlike all other infrastructure-related government initiatives where Uttar Pradesh, Madhya Pradesh, and Rajasthan were in the top five performing states, in the case of women empowerment, Tamil Nadu topped the list, with Karnataka coming in next. The top five states, including Maharashtra, Bihar, and West Bengal, accounted for 56.13 per cent of the total number of women entrepreneurs benefited.

Such a large numbers of beneficiaries in each of the schemes seems positive, but it also points to the fact that large parts of the country, especially the northern half, was deprived of basic infrastructure like roads and electricity for nearly seven decades post-independence.

Stay tuned for Swarajya’s ground reportage on the successes and failures of these schemes as we plan to evaluate them more deeply in the coming months.

All Of Bihar Is Now Lighted Up

The authors are Senior Sub-Editors at Swarajya