Chabahar Port: Phase One Complete, To Be Inaugurated By Iran’s President Rouhani On 3 December 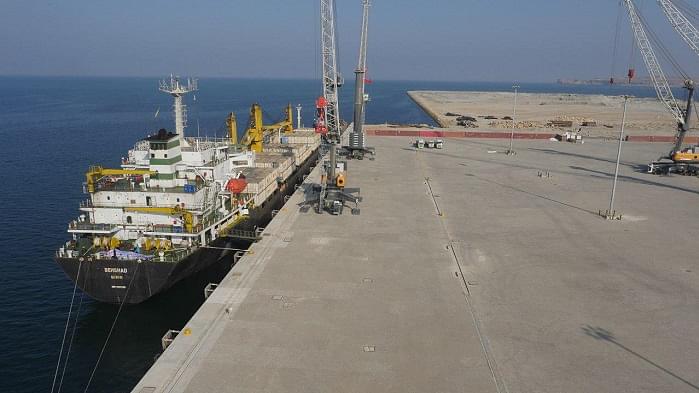 The first wheat consignment from India to Afghanistan through Chabahar port. (General Authority of Sistan Baluchistan)

Iran has completed the first phase of work on the strategically located Chabahar port, making it suitable for handling large container ships, the Hindu has reported.

According to the daily’s report, the first phase will be inaugurated by Iranian President Hassan Rouhani on 3 December, although it is not clear who would represent India at the ceremony that will attract multiple dignitaries from all nations that the port will benefit. Shipping Minister Nitin Gadkari could travel to Chabahar for the event, the report says, citing sources in Iran.

The port, located near the mouth of the Persian Gulf, will provide India access to Afghanistan and Central Asia. This is important given Pakistan’s repeated denial to provide Indian traders land access to the land-locked countries in the region. It will also link the region to Russia and Europe through the 7,200 International North South Transport Corridor backed by the Kremlin.

India had recently sent its first consignment of wheat to Afghanistan through the port and plans to send seven more shipments by the end of January. India, Iran and Afghanistan have signed an agreement for the development of a transit corridor in the region. New Delhi has committed $500 million for the port project. However, its plans have been hit by the sanctions imposed by the United States on Iran.

The Indian side is working on its part of the project and had reportedly awarded contracts last month for construction equipment such as cranes, but deteriorating relations between Iran and the US may to push the deadlines further.

India is also working on a $1.6 billion plan to construct a 500-km railway line that will connect the port to the eastern city of Zahedan on the border with Afghanistan.

According to a report in Iranian newspaper Financial Tribune, the port’s loading and unloading capacity will increase from 2.5 million tons to 8.5 million tons with the completion of the first phase. Over $1 billion has been invested in the development and equipment of this phase, the report said, adding that the port will have four phases with the overall capacity of 77 million tons.

Citing the director general of Ports and Maritime Organization of Sistan-Baluchestan Province, Behrouz Aqaei, the report said transit via Chabahar is $1,000 cheaper than Pakistani ports. Pakistan’s Gwadar port, developed by China, is just 72 km away from Chabahar port and has been leased to Beijing for 40 years.