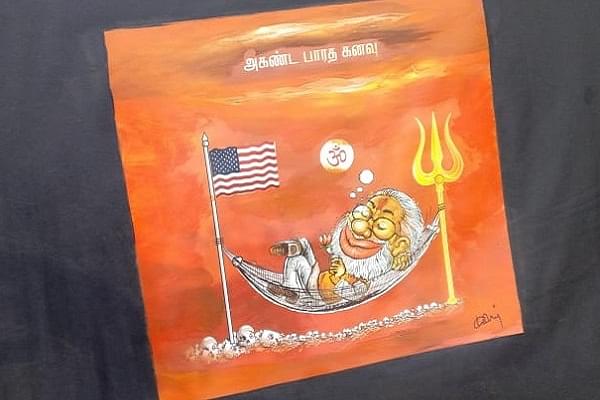 Painting at exhibition in Loyola College

Chennai's Loyola College on Monday (21 January) apologised for maligning Hindu symbols at a controversial art exhibition, held in its premises as part of its cultural event Veedi Viruthu Vizha.

Tamil Nadu unit of the Bharatiya Janata Party (BJP) and several Hindu organisations had threatened to launch a protest against some of the paintings which depicted Hindu symbols in crude and derogatory manner.

Over the weekend, several social media users shared images from the art exhibition held in the college, where derogatory drawings of Bharat Mata, in the context of the #MeToo Movement, and Prime Minister Narendra Modi, were displayed.

Here are some of the paintings where were deemed offensive by many:

BJP national secretary, H Raja, had requested тall Hindu nationalists and patriotsт to assemble at the DGP office to file a petition against the college management for displaying тderogatoryт and тdemeaningт paintings at the two-day event on reviving traditional art forms held on 19 and 20 January.

Taking to Twitter this morning, Raja called for action against Loyola College for offending Hindu sentiments. Raja tweeted, тVCK, Communist, Naxalite and Christian conversion groups have joined together in a planned way to attack Hindu religion and our nation at Chennai Loyola College.т

Many Hindu advocacy groups were set to file a complaint against the institution over the alleged disrespect shown by it to тHindu religion, Prime Minister Modi and Bharat Mataт at the festival organised under the garb of promoting folk arts.

Following the condemnation it received from several quarters for allowing a campaign besmirching other religions, Loyola College quickly went in to a damage control mode and issued a press release stating that тwe are pained and saddened that the venue to conduct a cultural event has been misusedт.

The statement also claimed that paintings were displayed without its knowledge. The college apologised over the cultural event being misused against a particular religious group, political party and countryтs leadership. тWe have removed the exhibits after it was brought to our notice, the statement read.

The coordinator, Art & Literary Unit, LSSS, Loyola College, Dr Kaleswaran said that, тWe would like to reiterate that we have immediately removed the exhibits the moment it was brought to our notice.т

He added, тWe acknowledge our lapse and apologise for the insurmountable hurt this has caused.т

According to a report in News Today, despite the apology, faculty and management expressed their unequivocal backing for students who displayed the art and said тart must be viewed as artт.

Over the paintings on Bharat Mata, in the context of the #MeToo Movement, a professor said, тThe women who have been harassed are all children of Bharata Mata and the painting showed what they went through. There is nothing wrong in that.т

In November 2018, the Department of Tamil at St Josephтs College, Tiruchi, had to тpostponeт a seminar titled тHarassment of women as registered in Tamil Literatureт, after Minister for Tamil Culture тMa Foiт Pandiarajan strongly intervened and said he would not allow the тderogatory and slanderousт event.