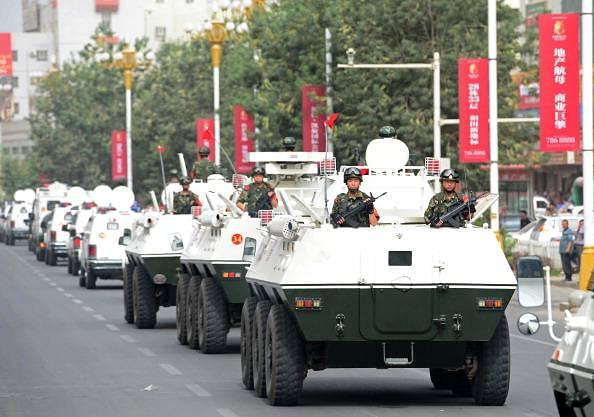 A new Chinese military exercise with advanced DF-16 medium-range ballistic missile with a range of over 1,000km could pose a threat to countries including India, Japan and the US.

China's newly-formed Rocket Force, a special contingent to handle a range of missiles in its military's arsenal, has held an exercise in an undisclosed location, the videos of which were released by the People's Liberation Army (PLA), which is normally secretive about its weapons systems.

What could be the implications?

Experts said the DF-16 poses a challenge to foreign military installations along the first island chain, which is what the Chinese military calls the series of islands that stretch from Japan in the north to Taiwan and the Philippines to the south, the Daily report said. The videos showed several launch vehicles carrying the ballistic missiles and Rocket Force missile brigade soldiers handling a number of scenarios, including chemical/biological contamination, countering satellite reconnaissance and electronic jamming, state-run China Daily reported on Monday.

The crews practised in multiple manoeuvres, such as rapid loading, redeployment and launch sequence, though the video showed no missile actually being launched. Two types of DF-16 appeared in the exercise. The video represents the third time the DF-16 has been shown to the public.

A commentary in the official website of People's Liberation Army's (PLA) said on January 20 the day Donald Trump assumed presidency that the chances of war have become "more real" amid a more complex security situation in Asia Pacific.

Xu Guangyu, a retired major general and now a strategy researcher, said that DF-16 has a strike range of more than 1,000 kms, filling the gap that previously existed with the absence of a medium-range ballistic missile in the PLA's arsenal. He said the missile also is able to reach Okinawa, a Japanese island about 400km from China's Diaoyu Islands. Shi Hong, executive editor of Shipborne Weapons, said the DF-16 has a strike accuracy that is as good as that of a cruise missile, Shi said.