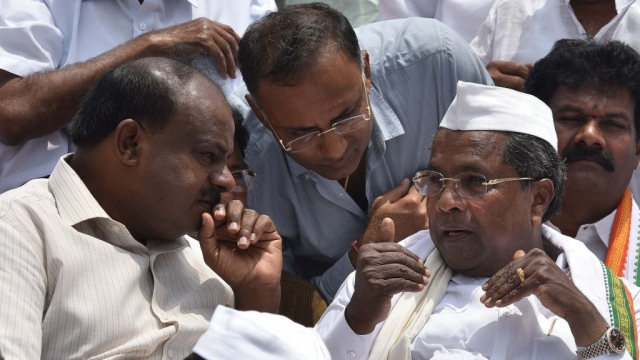 Senior Congress leader and Karnataka’s Deputy Chief Minister G Parameshwara has said that his party has not taken any decision on backing Chief Minister H D Kumaraswamy for five years, Times of India has reported.

“The issue is yet to be discussed and finalised. Our immediate aim is to pass the floor test, allocate portfolios and provide good administration. The modalities, including sharing the CM post, are yet to be worked out,” Parameshwara, who is also head of the state Congress, was quoted by the daily as saying.

His comment, which indicates that the cracks in the Congress-Janata Dal (Secular) alliance are widening, came just a days after Kumaraswamy said that he is not confident of running the coalition government smoothly.

“People also have doubts, not only me, people in the state also have doubt whether this government will function smoothly. But I have belief that with the grace of Sharadambe and Sringeri jagadguru (Shankaracharya) everything will go smoothly,” he had said while talking to reporters late on Tuesday in Sringeri.

“This is a big challenge in my life. I’m not expecting that I will be able to fulfil my responsibilities as chief minister easily,” he had said.

Kumaraswamy’s statement had come a day after senior Congress leader D K Shivakumar said that the longevity of the coalition government in Karnataka will depend on Kumaraswamy’s ‘cooperation’.

“We have to co-exist to so that the government runs smoothly. If we want to reap fruits, Kumaraswamy and I have to work together. If he sits on power and doesn’t cooperate, it will not work out,” he said in an interview with the Deccan Herald.

Responding to a question on his two-decade-long feud with Kumaraswamy, he had accused the JD(S) leader of being an “egoistic man”.