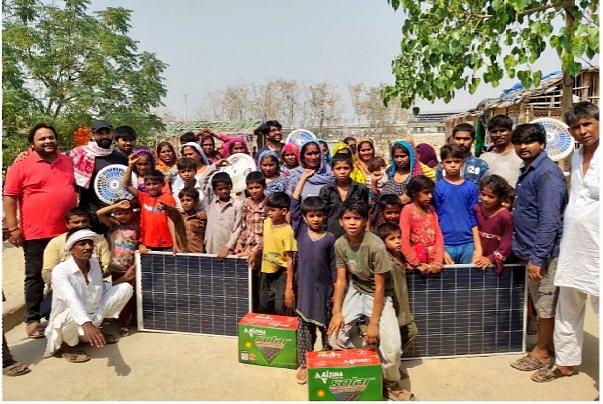 A campaign run by Ashutosh Joshi based in Delhi-NCR has managed to raise Rs 1,15,000 in a matter of few hours based on social media campaign for providing basic amenities to Pakistani Hindu refugees in the capital region. The campaign started on 5 June has already reached Rs 3,91,944, half of its total target of Rs 6,60,000.

Joshi, working as Manager Finance for a large multi-national says that he and a group of people at Hindu Political Action Committee (@HiPAC1/Twitter) inspired by the dynamic leadership Prime Minister Narendra Modi decided to take up grass root work.

The campaign page on Milaap states that in May 2018, to support the Adarsh Nagar Migrants colony already beset by a myriad of problems, suffered a big blow when the authorities disconnected their power connection in June 2018. Joshi said, “we supported the colony by running a diesel generator for most of the year 2018 while reaching out to the authorities for restoration of electric connection”.

While the colony is still without electricity, Joshi and others used the remaining money in the campaign to purchase Solar Panels with inverter, battery, fan, lights and a power point for 40 families. They needed more to provide the same for each family, and therefore started the campaign.

Joshi states that the organisation has raised upwards of INR 90 lakh for our grass root heroes in our campaigns. Previously, Hindu Political Action Committee had raised more than Rs 40 lakh for the Dalit Hindu activist Ramalingam who was murdered after he confronted Muslim missionaries from radical Islamist organisation Popular Front of India (PFI) denigrating Hinduism and preaching Islam in his colony.