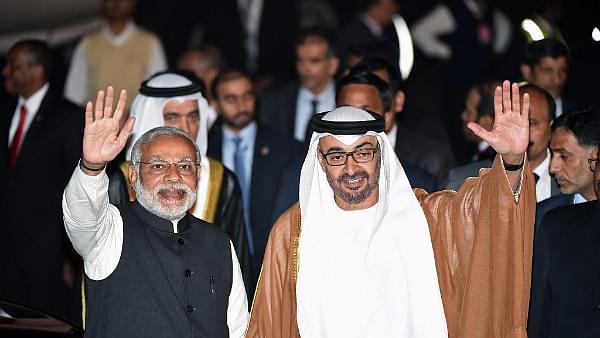 India and United Arab Emirates (UAE) signed 14 pacts on Wednesday to deepen relations in trade and security. The two nations also signed a pact to raise the level of bilateral relationship to a comprehensive strategic partnership. An agreement on joint investment fund, to facilitate investment of $75 billion in India by UAE, is also expected to be signed.

In a joint address with visiting Abu Dhabi Crown Prince Sheikh Mohamed Bin Zayed Al Nahyan, who will be the chief guest at the Republic Day parade, Modi said the UAE was one of India's "most valued partners and a close friend in an important region of the world". He described UAE as "an important partner in India's growth story".

Sheikh Mohamed, the visiting Crown Prince, said that it was "refreshing to see how the Indian leadership is keen to strengthening relations with the UAE". Meanwhile, the UAE government lit up Burj Khalifa in saffron, white and green of the Indian national flag to mark India’s for Republic Day.

Of the 14 agreements signed, one was between state-run companies - Indian Strategic Petroleum Reserves Ltd and the Abu Dhabi National Oil Company - on storage and management of oil at strategic facilities in India. UAE will help in filling one of India three strategic petroleum reserves. UAE is the sixth largest oil supplier to India, latter being former’s second largest buyer.