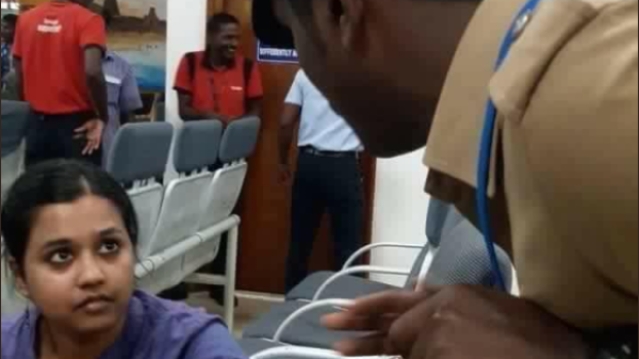 Lois Sophia, a 28-year-old research scholar at the University of Montreal, Canada, has been arrested by the police in Tamil Nadu for shouting slogans inside an aircraft in which Tamil Nadu Bharatiya Janata Party (BJP) chief Tamilisai Soundararajan was also on board.

Sophia shouted “Down with fascist BJP” inside the aircraft as Soundararajan was trying to fetch her bag inside the cabin in the flight that landed at Thoothukudi from Chennai. With the BJP leader protesting on coming out to the security area, Sophia was arrested and remanded in 15 days judicial custody.

On Tuesday, Deccan Herald reported that a Thoothukudi court had granted Sophia bail without mentioning the conditions under which it was granted. The daily said Sophia’s sloganeering was initially ignored by Soundararajan, but she objected to them when the research scholar indulged in sloganeering again at the arrival area. The research scholar also reportedly tweeted that she wanted to shout the slogan on seeing Soundararajan.

Question is #Sophia, a writer who extensively covered the Sterlite issue and the Chennai-Salem eight-lane highway project,Why she had to publicaly abuse a politician? Did she not believe in the might her own pen?#Tuticorinairport #TuesdayThoughtspic.twitter.com/rAVRHyBIxX

In a video that was shared on social media, Soundararajan was seen telling the police that she chose to keep quiet on board since it would have led to needless controversy. On social media, both drew flak, but some pointed out that Sophia has been actively involved in protests demanding closure of the Sterlite copper plant in Thoothukudi and the eight-land Salem-Chennai green expressway corridor. One of her uncles is an advocate in Thoothukudi who was active in the Sterlite protests.

If someone had behaved & shouted like this nutcase #Sophia in American airspace, either she would have taken down by the air marshals in the plane or would have seen F16s escorting the plane to the nearby airport & the nutjob will be serving at least a yr for disrupting a flight

Sophia’s father, A A Sami, a retired government servant, on his part, filed a complaint with the Pudukottai district superintendent of police alleging that Soundararajan had provoked BJP party workers to shout abusive words at his daughter. He even invoked his caste name in his complaint.

Which Devendrakula Vellalar names his daughter as Louis Sophia?? pic.twitter.com/sMHVMcPniI

On social media, those who jumped to Sophia’s support were told that shouting or sloganeering is not allowed on board a flight and if done in any other part of the world, she would have been promptly jailed. However, sensing an opportunity to embarrass the BJP, many political party leaders in Tamil Nadu jumped to Sophia’s support saying it is ‘freedom of expression’.