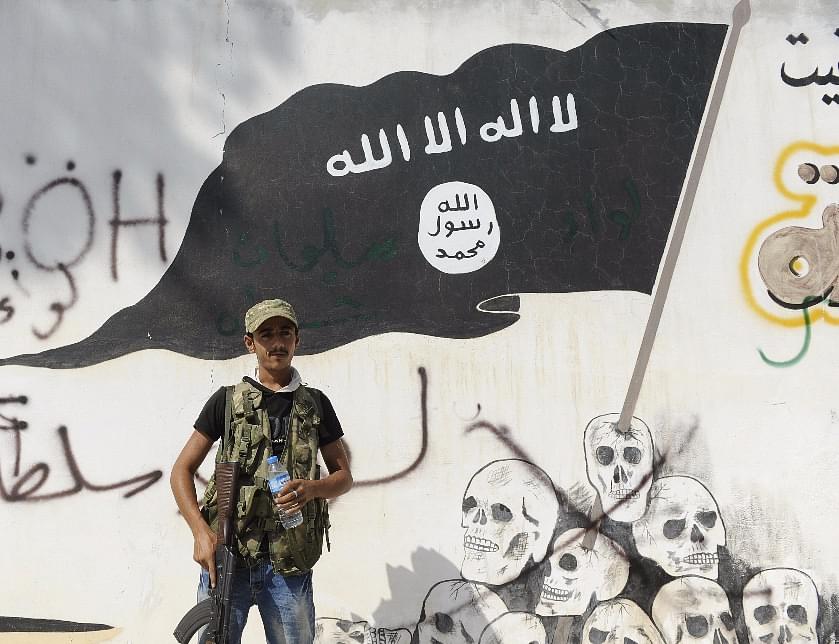 An Iraqi security force member stands in the backdrop of a Islamic State mural. (Defne Karadeniz via Getty Images)

In what looks like a case of Islamic State’s (IS) signature lone-wolf attacks, a captured Islamic State (IS) operative tried to slit the throat of the prison guard tasked to keep watch over him, the Indian Express has reported.

The IS operative, identified as Muhammed Mosiuddin alias Musa, was arrested in July 2016 from Burdwan with a sword, a knife, a pistol and incriminating documents. He had been in contact with IS India in-charge, Shafi Armar, as well as other Bangladeshi IS operatives through social media. Musa, who was handed over to the National Investigation Agency (NIA) following his arrest, had earlier revealed his plans to carry out beheading and attacks in Srinagar and Kolkata.

The warder, Govindo Chandra Dey, was critically injured in the assault and has been admitted to a local hospital. The attack took place at Alipore Central correctional home where Musa had been lodged by the NIA.

As the warder opened the cell door for a routine checkup on Sunday (3 December), Musa first hit him with a stone, and then tried to slit his throat with an improvised knife as the warder fell. He was pinned down by other inmates and the warder was rescued. Musa reportedly chanted slogans while attempting to slit the guard’s throat.

Musa has been separated from the other inmates and later claimed that the attack was part of his “jihad”, which is similar to what IS has extolled in its videos.

The outfit, in its videos circulated through several mediums, has urged Muslims to carry out lone-wolf attacks - attacks planned and carried out by self-radicalised local Muslims - across the world, and has also been trying to target India.