Tulsi Gabbard Considering Running For US Presidency In 2020, Claims Report 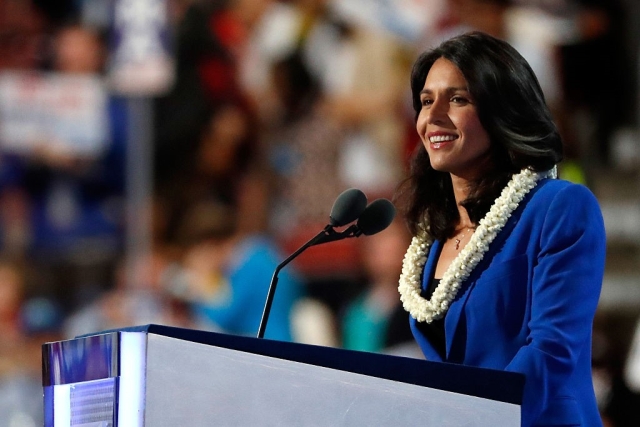 Politico, an authoritative source for American politics, has reported that Tulsi Gabbard, a Democrat representative from Hawaii, is considering to run for the office of US President in 2020.

Rania Batrice, who was the deputy camping manager for Bernie Sander’s 2016 presidential campaign, did not deny that the Hindu Congresswoman was considering to join the list of Democrats who wanted to contest the 2020 elections.

“I think everybody is focused on 2018, but we will see what happens after that,” Batrice mentioned in an interview. “Someone like Tulsi, with her experience, is an important voice in the party and the country.”

The 37-year old Gabbard became the first Hindu to serve in Congress when she won a seat in the US Congress on the Democratic Party’s ticket. She has also served in the Iraq War.

For adopting a mixture of progressive and populist economic policy along with an unconventional non-interference approach in foreign policy, she has been lauded by both Bernie Sanders and Steve Bannon, Donald Trump’s former Chief Strategist.

With rumours surrounding Nikki Haley, an Indian-American, possibly bidding to run as the Republican candidate, the 2020 elections might turn out to be a war between two women candidates with strong ties to India.