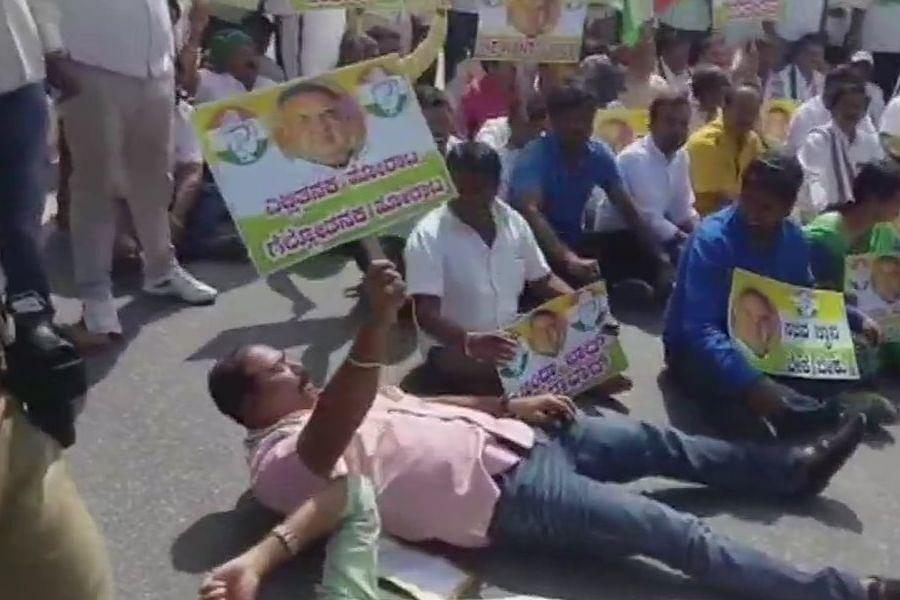 Supporters of Congress MLA and former State Minister Ramalinga Reddy protest on Hosur Road in Anekal over denial of ministerial berth in the cabinet. Image courtesy of ANI.

Infighting over ministerial berths in the JD(S)-Congress government in Karnataka has now spilled over to the streets with supporters of the seven-time MLA and former state Home Minister Ramalinga Reddy blocking the arterial Hosur Road and disrupting traffic in the key commercial area of Bengaluru.

The protests follow a recent reshuffle of portfolios by the ruling combine, which has seen the senior leader being left out from the list of new ministers. The list was reportedly approved by Congress president Rahul Gandhi.

Efforts were on to pacify the leader, including an offer for the post of Parliamentary Secretary to his daughter Sowmya Reddy, but have yielded no results. The former minister has now spoken out publicly against the party’s decision to keep him from ministership.

The reshuffle, which was concluded on Saturday (22 December), saw the ruling combine induct eight new ministers, all of them belonging to the Congress. The exercise was widely viewed as an attempt to reign in growing dissidence in the North Karnataka leadership of the combine with seven of the eight ministers belonging to the region.

It has however led to renewed infighting with several southern leaders now feeling dissatisfied at being left out.