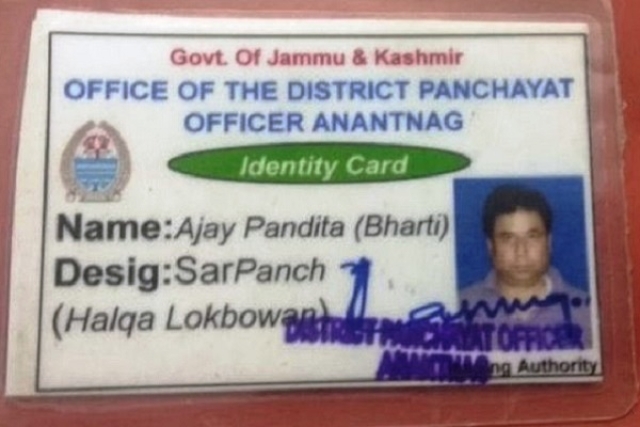 A Kashmiri Pandit who was the sarpanch of a village in Jammu and Kashmir’s Anantnag district was shot dead by terrorists at around 6 PM today (8 June).

Terrible, terrible news from Kashmir. A Kashmiri Pandit Sarpanch, Ajay Pandita (Bharti) killed by Islamist terrorists at Lok Bhawan, Larkipora in Anantnag. Shocked beyond belief. He was a relative.

The victim has been identified as 40-year-old Ajay Pandita Bharti who was the sarpanch of Lukbawan village in Larkipora area.

As per a police statement, Pandita was shot by terrorists near his house. He was rushed to a nearby hospital but succumbed to his injuries.

A case has been registered in the matter and the area has been cordoned off. A joint team of security forces has launched an operation to track down the terrorists.’

As per journalist Aarti Tikoo Singh, Pakistan’s The Resistance Front (TRF) which is a new name of terror group Lashkar-e-Taiba has taken responsibility for killing.