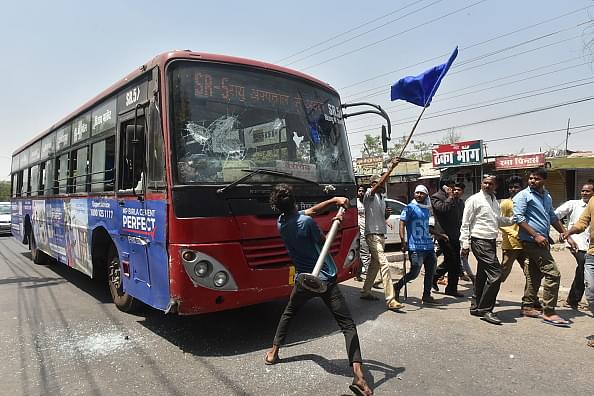 Members of a dalit organisation damaging a BRTS bus during Bharat Bandh called by Dalit organisations on April 2 in Bhopal. (Photo by Mujeeb Faruqui/Hindustan Times via Getty Images)

Madhya Pradesh police, while investigating cases of violence during the Bharat Bandh on 2 April, have found that people were paid to disturb law and order in the state, a report in Hindi daily Dainik Jagran says.

The police have found several labourers who have admitted that they were paid between Rs 200 and Rs 500 for participating in the rally and indulging in violence for two hours. Source of the funds used to pay the labourers remains unknown.

The police have also questioned the employers of these labourers. The daily wagers did not come to work that day, saying they were being paid more elsewhere.

As per the police, residents of areas around Gwalior, such as Murar and Thatipur, were told that the government is ending reservations for the Scheduled Caste and Scheduled Tribes. This shouldn’t come as a surprise because, protesters, across states, were seen telling reporters on camera that they were agitating because "reservations are being scrapped by the Modi government."

This is not the same as the reason given by Dalit outfits and political parties, such as the Bahujan Samaj Party, behind the agitation. These outfits and parties had said that the agitating against "dilution" of SC/ST Act by the Supreme Court. This had given rise to speculations whether they had been misled into agitating.