Miscreants Who Vandalised Heritage Hampi Structures Made To Re-Erect Them; Slapped With Rs 70,000 Fine Each 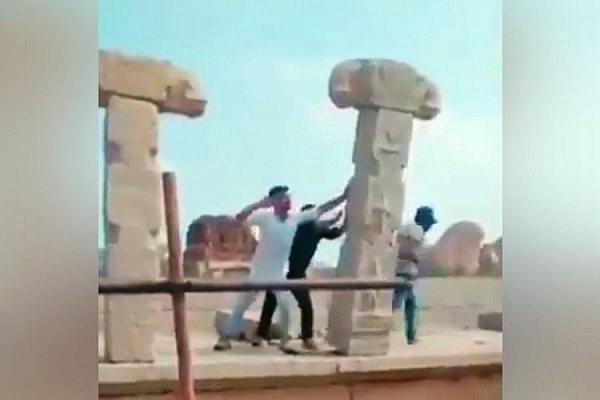 Miscreants who were recently filmed vandalising pillars of the Vishnu temple complex in Hampi have been made to restore them to their original state, New Indian Express has reported.

They have also been slapped with a Rs 70,000 fine each in accordance with an order by a JMFC court in Hosapete. The vandals were only let-off by the judge after they successfully re-erected the fallen pillars weighing tonnes.

The accused were arrested on 8 February and were booked under Ancient Monument and Archaeological Sites and Remains Act, 1958.

As per Additional Public Prosecutor  Geetha Mirajkar, the four accused identified as Ayush, Raja Babu Chowdary, Raj Aryan and Rajesh Kumar Chowdary were taken to the Hampi site and made to carry out the task in presence of Archaeological Survey of India officials. They were subsequently released on Saturday (16 February).

Following the vandalism, various citizens including former royals demanded that security be increased at the site.

Recently, New York Times’ 52 must-visit places list included Hampi at the second spot. The group of monuments at Hampi were also voted as one of Asia’s top emerging travel destinations for 2019.