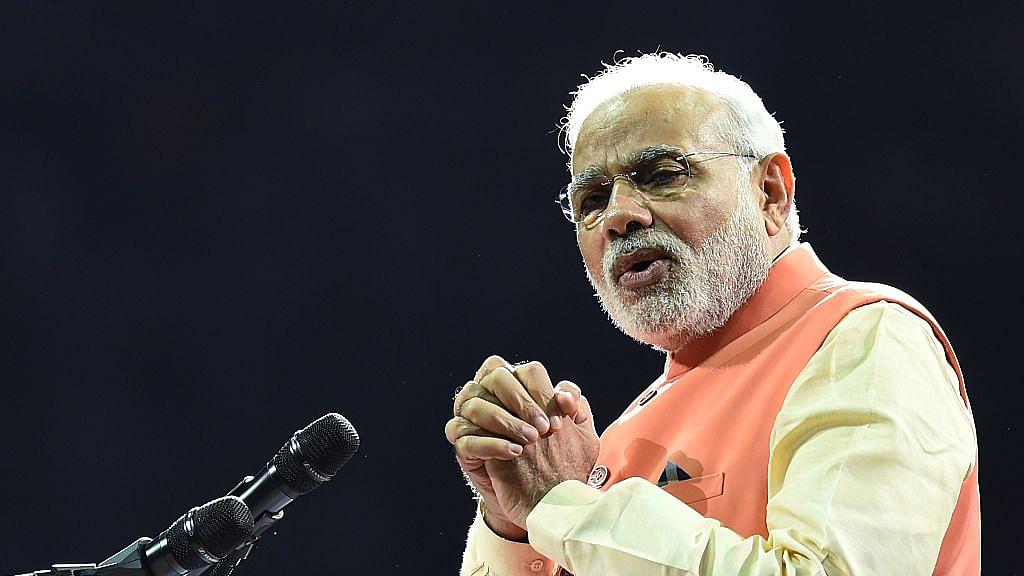 Modi Launches Irrigation Project, Promises To Double Farmers’ Income: Prime Minister Narendra Modi on Monday said his government has decided to double the income of farmers by 2022. He made the announcement while dedicating the Rs 1,500 -crore phase I of link-II pipeline canal of Saurashtra Narmada Avataran Irrigation (SAUNI) project to the people and laying the foundation stone for Rs 1,694-crore phase II of link II of the project. The SAUNI scheme would take water from Narmada to 115 dams in the parched Saurashtra region.

Medicine Prices Fixed To Ensure People Not Fleeced: Modi: The central government has fixed prices for as many as 700 medicines for the benefit of the people as part of a comprehensive healthcare policy, Prime Minister Narendra Modi said on Monday. Inaugurating a Rs 500 crore multi-speciality hospital set up by the diamond merchants of Surat, he also assured that the government would make sure that the doctors prescribe only generic medicines. “This will break the monopoly of big medicine outlets,” he said.

CBI Books 12 Trinamool Leaders In Narada Sting Case: The Central Bureau of Investigation on Monday filed a case against 12 top Trinamool Congress leaders, including members of Parliament and ministers, in connection with the Narada sting operation case. The list comprises the who’s who of Trinamool leadership and also an IPS officer. The move attracted a sharp reaction from party chief Mamata Banerjee, who called it a “political game”. In the sting operation, the TMC leaders are seen purportedly accepting money from representatives of a fictitious company in return for favours.

Supreme Court Orders Sahara To Auction Aamby Valley: In another blow to the Sahara Group, the Supreme Court on Monday ordered auction of its prime Aamby Valley township near Lonavala in Pune for failing to deposit Rs 5,000 crore of the Rs 14,000-crore due towards refund to investors. The top court set in motion the process to recover the dues owed by the Sahara Group to the Securities and Exchange Board of India (SEBI). The case relates to two group firms which had raised over Rs 24,029 crore from 29.6 million investors by issuing housing bonds. SEBI found this to be in violation of its public issue norms and ordered a refund in 2011

Air India Considering Imposing Fine On Unruly Passengers: If reports are to be believed, passengers who delay Air India flights could face a fine of up to Rs 15 lakh. The minimum fine expected to be imposed would be Rs 5 lakh if the flight is delayed up to an hour, Rs 10 lakh for one-two hours and Rs 15 lakh for more than two hours. This comes less than a month after Shiv Sena member of Parliament Ravindra Gaikwad assaulted an Air India employee.

AIADMK Factions Talk Of Merger: The two warring factions of Tamil Nadu’s ruling All India Anna Dravida Munnetra Kazhagam (AIADMK) will come together, state Finance and Fisheries Minister D Jayakumar hinted after a late-night meeting attended by more than 20 ministers on Monday. Briefing journalists, Jayakumar said, “We discussed only two things. One, the party has to be united. Two, about an affidavit to be filed before the Election Commission to retrieve the ‘Two Leaves’ symbol. ”

Plastic Bullets For Crowd Control In Kashmir: Non-penetrative plastic bullets may be used in Jammu and Kashmir for crowd control or stone-pelting mobs to reduce collateral damage during counter-insurgency operations. According to government sources, pellet guns will continue to be used as the last resort in the non-lethal category. Senior Home Ministry officials said that thousands of plastic bullets have already been produced and sent to the Kashmir valley for use by the security forces deployed there. These bullets are said to be non-penetrative and can be fired from INSAS rifles.

US Delivers Tough Message To Pakistan On Terrorism: Pakistan’s top civil and military leaders were told to “confront terrorism in all its forms” by US National Security Adviser H R McMaster on Monday, a day after he hinted the Donald Trump administration could take a tougher stance on Islamabad’s efforts to counter militant groups. McMaster arrived in Pakistan on an unannounced visit after travelling to Afghanistan, where he told the media that Pakistan should target militant groups “less selectively” and stop using “proxies that engage in violence”.

Bhim: India’s Ticket To A Cashless Economy: Most users consider transactions on Bhim to be “safe” because it has government backing. And combining the superior user experience with UPI’s low transaction cost, means that we finally have a payments app that can genuinely compete with cash on both convenience and price.

A Robust And Resilient Banking Sector Critical To Ensuring Strong Economic Growth: With the economic cycle now on an upward trajectory, the banking sector’s role becomes crucial to provide the necessary capital. Its robustness, thus, assumes even more importance.

Donald Trump, China And The Ballpoint Pen: Donald Trump’s about-turn on the US Federal Reserve monetary policy and its leadership make sense; they are part of the China package deal. In return for dealing with North Korea effectively and decisively, Donald Trump has openly offered better trade deals with China.

Is Today’s IT Workforce Sufficiently Trained For Dealing With The Future? With IT today, the focus is on orchestrating small services and rapidly getting them to market. The mindset of IT workforce needs to move from one of being told what to do, to identifying what needs to be done and then going ahead and doing it.

The Nation Wants To Know Why Arnab’s Republic Is Giving Lawyers So Much Work: Judging from the number of envious editors and legal notices, Arnab Goswami has already succeeded in making ‘Republic’ a name to reckon with even before its launch.