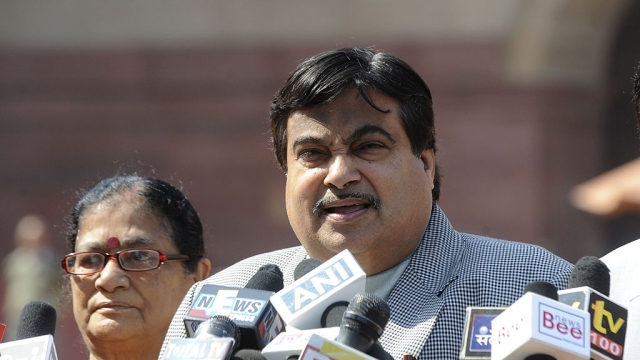 Gadkari Unveils Rs 40,000 Crore Northeast Expressway Project: Union Minister of Roads, Highways and Shipping Nitin Gadkari has said that the first express highway project in the northeast region will be developed along the Brahmaputra river in Assam at an estimated investment of Rs 40,000 crore. "Northeast is our priority. We are going to develop the first express highway of North East in Assam along the banks of Brahmaputra. This 1,300 km-long express highway is likely to incur an investment of Rs 40,000 crore," Gadakari said.

BJP Keeps UP Poll Promise, Waives Rs 36,359 Crore Farm Loans: The BJP government in Uttar Pradesh decided on Tuesday to waive crop loans of up to Rs 1 lakh of small and marginal farmers in the state, a relief the party promised before the February-March assembly elections. Besides, the cabinet also decided to write off Rs 5,630 crore in non-performing assets of 700,000 farmers. The twin waivers – among nine decisions the cabinet took – would together cost the government Rs 36,359 crore.

Tamil Nadu Government Told To Waive Farm Loans: The Madras High Court has ordered the Tamil Nadu government to waive all agricultural loans, benefitting close to 20 lakh farmers in the state. The court took cognisance of the 23-day protest by farmers at Jantar Mantar in New Delhi. However, the farmers feel this is a small victory. “Our loans from nationalised banks still remain. We will continue to fight and protest, until our demands are met,” said a representative of the protesting farmers.

New Tax Collection Target Achieved: The central government’s revenue department has exceeded its revised tax collections for both direct and indirect tax target for 2016-17 by about 18 per cent at Rs 17.1 lakh crore against the budget estimate of 16.97 lakh crore. In terms of gross revenue collections, the growth rate in corporate tax stood at 13.1 per cent while that of personal income tax was 18.4 per cent.

Now, Aadhaar For Air Travel? IT major Wipro is developing a blueprint for Aadhaar-based biometric access to flyers at all airports across India. The aviation Ministry had been toying with the idea of linking Aadhaar numbers to air travel bookings and then enabling biometric access possible at airports. The push towards taking a concrete step in this direction came at a recent meeting of various airport operators and airlines with Aviation Minister Jayant Sinha and Aviation Secretary R N Choubey.

India Rejects US Mediation Role: India on Tuesday said its position on resolving all issues with Pakistan bilaterally in an atmosphere free of terror hasn’t changed while responding to suggestions that US President Donald Trump could mediate in solving the problems between the two neighbours. External Affairs Ministry spokesman Gopal Baglay was responding to US ambassador to the United Nations Nikki Haley’s remarks that her country would “find its place” in efforts to de-escalate Indo-Pak tensions and not wait till “something happens”.

India-Britain FTA On Cards? Finance Minister Arun Jaitley and UK Chancellor of the Exchequer Philip Hammond discussed the possibility of a free trade agreement (FTA) among other things on Tuesday at the 9th UK-India economic and financial dialogue wherein Britain pitched for increased trade engagement with India. The two leaders also agreed to set up a 240-million-pound Green Growth Equity Fund to finance clean energy projects. It would be a sub-fund of the Centre’s National Infrastructure and Investment Fund to boost infrastructure financing.

New H-1B Rules: Blow To Entry-Level Programmers: The US has quietly reworked its H-1B visa norms, a move that is likely to hit entry-level software programmers from India the hardest. The revised guidelines were released by the US Citizenship and Immigration Service ahead of the H-1B season. According to reports, prospects of entry-level programmers would be severely affected as they would no longer be considered under the ‘speciality occupation’ category. Also, the Donald Trump Administration has tightened the minimum education requirements for programmers.

It’s Time For India And Britain To Show Benefits Of Free Trade To The World: With us we bring this message: as the world’s oldest democracy and the world’s biggest democracy, who is better to show the world the true benefits of free trade and open markets than Britain and India?

Indian Rupee’s Exuberance Needs Tempering: The rupee’s rise is also being aided by a tight monetary policy, since the higher rates are attracting capital flows into debt instruments. In the last three months, the Indian rupee appreciated by 4.5 per cent against the US dollar.

Firing Up The Atomic Energy Establishment: The department of atomic energy has been the proverbial white elephant – long on promises and short on delivery. Closer scrutiny by the prime minister and an adoption of the sector as he has done with solar power would go a long way in revitalising a moribund agency.

NPAs: The New Wedge In Centre-State Relations: The equity market’s optimism beggars belief because NPAs – or non-performing assets, as bad loans are called technically – have remained impervious to an alphabet soup of previously attempted schemes.

India And Monetary Policy: Where To Go From Here? The Reserve Bank of India’s policy committee is expected to leave the repurchase, or repo, rate steady this week. Three domestic factors will matter most for monetary policy – inflation, liquidity and the output gap.

If Ban On Beef Is Food Fascism, Why Not Call SC’s Highway Booze Ban Judicial Fascism? Judicial law-making is pure and simple contravention of constitutional principles. If we define fascism as laws imposed by unelected bodies or people who rule by authoritarian diktat, the higher judiciary’s frequent forays into law-making fit the definition.