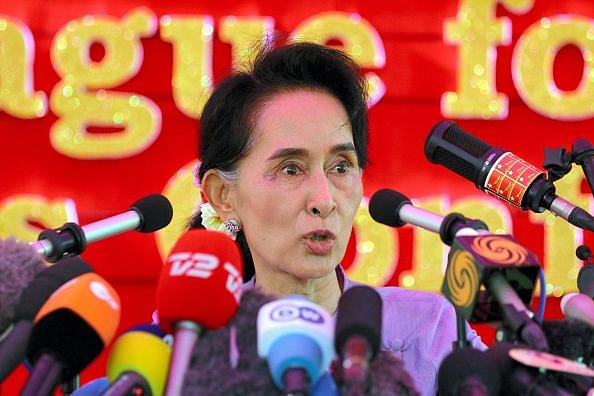 Myanmar’s State Counsellor Aung San Suu Kyi will lead a delegation to defend her country against allegations of genocide of Rohingya Muslims before the International Court of Justice next month.

Aung San Suu Kyi - State Counsellor, Foreign Minister and once-winner of the Nobel Peace Prize - will lead a team to "defend the national interest of Myanmar at the ICJ", her office said in a statement late Wednesday (20 November) night.

The move comes after the Gambia on 11 November filed an application to the top UN court alleging Myanmar had carried out mass murder, rape and destruction of communities in Rakhine state, including against the Muslim Rohingya minority, Efe news reported.

The ICJ has set dates for 10-12 December for public hearings with oral observations from both the Gambia and Myanmar over the three days.

More than 730,000 Rohingya have fled the country to Bangladesh since August 2016 in the wake of a military crackdown in response to an alleged attack by an insurgent Rohingya group against police and border posts.

Doctors Without Borders estimates that at least 6,700 Rohingya, including 730 children under five years of age, died as a result of violence unleashed by soldiers.

In its application, the Gambia said the "genocidal acts committed during these (clearance) operations were intended to destroy the Rohingya as a group … by the use of mass murder, rape and other forms of sexual violence, as well as the systematic destruction by fire of their villages, often with inhabitants locked inside burning houses."

The Gambian delegation also asked the court to impose a series of provisional measures on Myanmar to prevent "extrajudicial killings or physical abuse; rape or other forms of sexual violence; burning of homes or villages; destruction of lands and livestock, deprivation of food and other necessities of life, or any other deliberate infliction of conditions of life calculated to bring about the physical destruction of the Rohingya group."

Another of the provisional measures requested is that Myanmar "does not destroy or make the evidence related to these events inaccessible" or "destroy or render inaccessible any evidence related to the events described in the Application, including without limitation by destroying or rendering inaccessible the remains of any member of the Rohingya group who is a victim of alleged genocidal acts, or altering the physical locations where such acts are alleged to have occurred."

The ICJ indicated that the December hearings will be dedicated to the submission of these provisional measures.

This is the second court in The Hague considering opening legal cases against Myanmar. On 14 November, International Criminal Court judges authorized an investigation into alleged crimes against humanity in Myanmar.

"The Chamber accepted that there exists a reasonable basis to believe widespread and/or systematic acts of violence may have been committed that could qualify as the crimes against humanity of deportation across the Myanmar-Bangladesh border and persecution on grounds of ethnicity and/or religion against the Rohingya population," the court announced.

Myanmar does not recognise the Rohingyas as citizens and for decades has subjected them to widespread discrimination, including restrictions on freedom of movement.