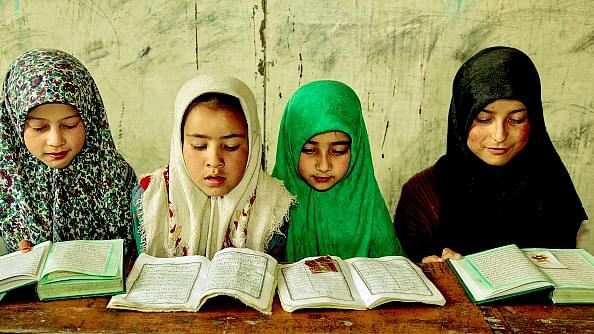 Representative image of girls studying at a Madrassa in J&K (Photo by Creative Touch Imaging Ltd./NurPhoto via Getty Images)

A madrassa teacher in Noida’s Sorkha area has been booked by police after parents of a six-year-old girl studying under him complained that their daughter had been beaten unconscious by him using a belt, reports Hindustan Times.

The father of the girl is a taxi driver who has been paying for both his daughters’ education at the Madrassa.

“We were paying separate fees for their admission, studies and accommodation and food. Every fortnight, we would bring them home for two days. On the afternoon of May 4, my wife was bathing my younger daughter when she found bruises on her back. We questioned both the girls, after which my elder daughter narrated the entire incident,” the father stated.

The family claims that the younger girl was assaulted by the cleric after she could not recite an Arabic word. He beat her using a belt, after which she lost consciousness for the next two hours.

The parents went to the Mosque complex to take up the matter with the Madrassa authorities, but were not allowed to enter by some ‘goons’.

Police have registered a non-cognisable case against the cleric under provisions of the Indian Penal Code. The accused is currently absconding.

Also Read: Rape In Madrassa: Family Horrified At Islamists’ Demand To Marry Off Minor Girl To Her Rapist