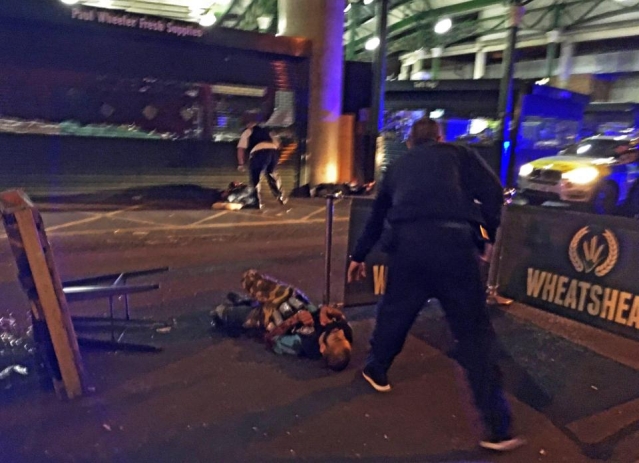 The body of Abz on the floor.

Saturday night's London Bridge terror attack, which claimed the lives of seven people, including the three attackers involved, and left 48 others injured from bullet and knife wounds, has once again shifted focus to Pakistan, as one of the three attackers gunned down, it turns out, was a jihadist of Pakistani origin.

Twenty-seven-year-old Abz has been described by The Sun as an ex-London Tube worker and a 'family man', who appeared on a Channel 4 TV documentary titled "The Jihadis Next Door" not too long ago and unfurled a jihadist flag in a park in an attempt to radicalise young kids. He has now been identified by the police as the ringleader of Saturday's London Bridge and Borough Market terror attack.

Abz identity was revealed through a former friend, who contacted the police about the terror thug's extremist views, and claimed that this father of two had gotten increasingly radicalised by watching twisted YouTube videos. He said Abz had become brainwashed after watching clips of American hate preacher Ahmad Musa Jibril which was easily accessible on YouTube and is so even now.

This friend of Abz said that he phoned an anti-terror hotline and informed as to why he thought the former was radicalised. In his view, the delay on the part of the law enforcement authorities to act on his information, promptly resulted in the knifing of bystanders and pub-goers and being caught in the crossfire.