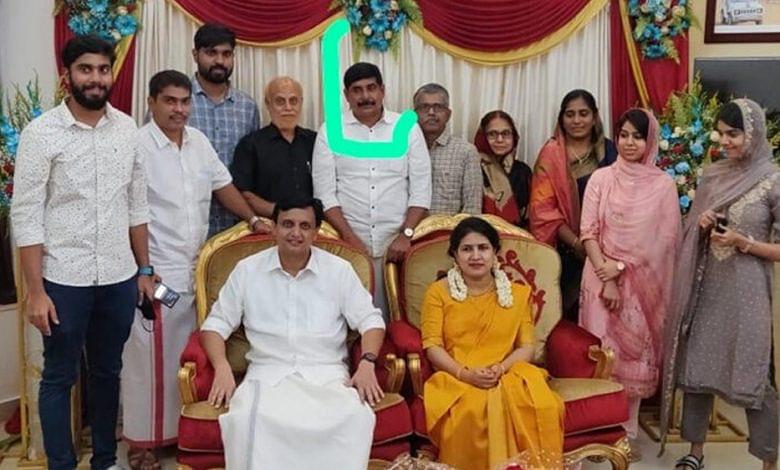 Mohammed Hashim, who is currently serving a jail sentence for murder of a RSS worker Ottapilavu Suresh Babu in Thrissur, was among the select 50 guests comprising of family and friends who attended the wedding ceremony of Veena and Riyas held at in his official residence Cliff House in Thiruvananthapuram earlier today.

Though the High Court had acquitted Hashim in the murder case in 2017 the Supreme Court had awarded him 7-year jail term. Incidentally CM also holds the home portfolio.

The marriage function was held adhering to Covid-19 protocols with not more than 50 people in attendance.

The BJP said it was a serious security lapse and sought an explanation from the CM.

Mohammed Hashim, murderer of RSS Karyakarta Shri. Suresh Babu, & convicted by Supreme Court for the same, attended the marriage of @CMOKerala Pinarayi Vijayan's daughter at Chief Minister's official residence. He was one among the 50 special invitees. Shocking! pic.twitter.com/DPAovrF13I

This was the second marriage for the comrades, as their first ones ended in divorce.

Veena was earlier married to Suneesh, an advocate in Thiruvananthapuram. They have a 10-year old son Ishaan. Veena had gone through a divorce in 2015.

Riyas’s first marriage to Dr Sameeha Saithalavi, a former syndicate member of Calicut University, ended in divorce in 2015. His first wife had levelled serious allegations of domestic violence against Riyas. He has two sons aged 10 and 13 from his first marriage.

Veena was recently in the eye of a storm after opposition Congress alleged that she had close ties to the management of a US company Sprinklr that won a deal from CPM government to record data of Coronavirus (Covid-19) patients.

After working in IT sector for a close to a decade, Veena turned in to an entrepreneur. She started Exalogic, a Bengaluru-based firm in Bengaluru with claims to expertise in mobility and cloud solutions.

Last month, a senior Congress leader P T Thomas had alleged that the sudden disappearance of the website Exalogic Solutions, owned by Veena could be traced to the Kerala government deal with the Sprinklr.

Riyas, who is the son of a retired IPS Officer P. M. Abdul Khader, was appointed DYFI’s president in February 2017. He has been a prominent youth activist associated with the Marxist party

Riyas was a surprise choice as the CPM candidate for Kozhikode Lok Sabha seat in 2009 elections but suffered a narrow loss to UDF’s MK Raghavan by a margin of about 800 votes.

Riyas was in the forefront of ‘beef cooking’ protests against draft regulation proposed by NDA government’s draft decision to regulate the sale and purchase of cattle from animal markets to ensure adherence to safety and hygience practices. Riyas frequently represents CPM in Malayalam TV channels.