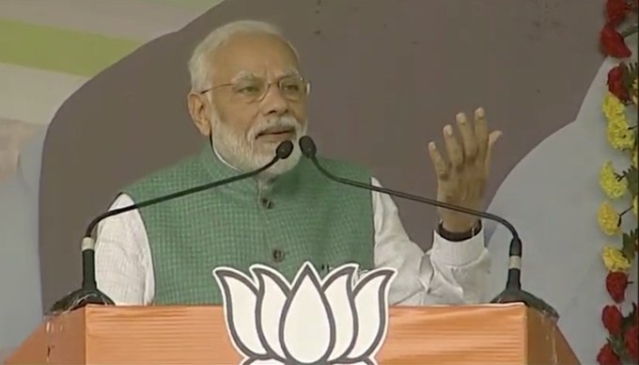 PM Modi at an election rally in Jharkhand (Twitter/@BJP4India)

Prime Minister Narendra Modi in Jharkhand’s Dumka on Sunday (15 December) claimed that his government saved the country by getting the Citizen Amendment Act (CAA) passed by Parliament.

Launching a blistering attack on the Congress, PM Modi said, "The Congress and its allies oppose the Bharatiya Janata Party (BJP) and Modi. While opposing Modi they have started opposing their own country's progress as well.

"The minorities in Afghanistan, Pakistan and Bangladesh were subjected to atrocities. The mothers and sisters were exploited. Those who left those three countries and came to India belonged to Hindu, Parsi, Christian, Jain and Sikh communities. The way the Congress is instigating, creating storm and violence indicate that we saved the country by getting the CAA passed by Parliament," he said.

"When we scrapped the Article 370 and the Supreme Court gave judgment in the Ram Janambhhomi case, Pakistanis protested at the Indian High Commission in London. The Congress did what Pakistan did.

"Has any anyone protested at embassy of his own country? The memoranda are submitted to the high commission, which reaches the government of India. The Congress is defaming the country in the world," said Modi.

The Congressmen were only concerned about their families and couldn't be expected to do anything for the country, he said and added, they were not ready to accept anyone who worked for the country and the society.

Targeting the Jharkhand Mukti Morcha (JMM) president Shibu Soren and his family, Modi said, the Santhals gave them respect and position, but they thought only about themselves.

"They made palaces for themselves. When they didn't mend their ways, you punished them in the polls. But they have not changed," Modi said.

Criticising the opposition alliance in the state, he said the Congress and the JMM had no roadmap or vision for the development of Jharkhand. "They are concerned only to fill their treasure," Modi said.