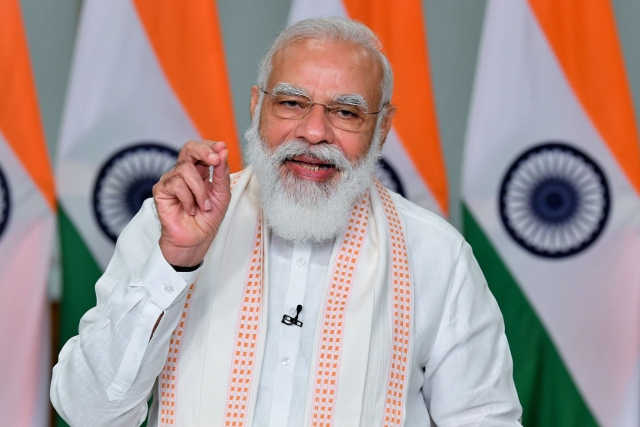 Speaking at the virtual grih pravesh (housewarming) ceremony of the houses, the PM said his government's flagship housing scheme not only provides homes to the rural poor but also gives them confidence, reported Hindustan Times.

The Prime Minister also interacted with several beneficiaries on the occasion.

“I spoke with many who have got their pucca houses today and have got their dream home. Now 1.75 lakh families of Madhya Pradesh, who will have their own homes today. I also congratulate them and wish them all the best,” PM Modi said.

He told that the houses were built in only 45 to 60 days despite the ongoing Covid-19 pandemic in the country.

“Earlier, it usually took around 125 days to build a house. But during the Covid-19 pandemic, we took only 45-60 days ,” Modi said. He said that this happened due to the migrant workers who returned from the cities to their native places and joined the workforce.

“I am satisfied that under the PM Garib Kalyan Yojana, works worth about Rs 23,000 crore have been completed in many states, including Madhya Pradesh,” the Prime Minister said.

“This day also reinforces the belief of crores of citizens that there are government schemes made with the right intention do become a reality and reach their beneficiaries. I can feel the satisfaction and confidence among those who have found their home today,” he added.

Emphasising the functioning style of his government, he said that in 2014, after studying earlier experiences, the old scheme was first tweaked and then implemented with a whole new perspective in the form of the Pradhan Mantri Awas Yojana.

“In this, transparency was given a priority — from beneficiary selection to house allotment,” Modi said, adding that earlier people had to run behind officials and others, but now the schemes automatically detect intended beneficiaries.

He said that priority is also given to locally available and used goods, ranging from material to construction. And house designs are prepared and accepted according to the local needs.

Stressing on Swachh Bharat Mission, Modi said be it toilets built under the Pradhan Mantri Awas Yojana or Swachh Bharat Abhiyan, they are not only providing facilities to the poor, but also are a major source of employment and empowerment.

“Especially in changing the lives of our rural sisters, these schemes are playing an important role,” said, adding that during his Independence Day speech on August 15 this year, he had said that the work of laying optical fibre in about six lakh villages will be completed in the coming 1,000 days.

“Earlier, the goal was to provide fibre network to 2.5 lakh panchayats; now, it has been resolved to reach every village in the country,” he said

He said that when fast Internet reaches villages, Wi-FI hotspots will be set up. “Then, the village children and youths will get better opportunities for education.”