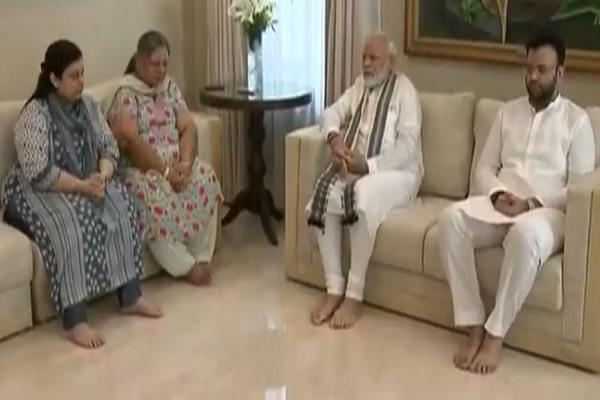 Prime Minister Narendra Modi on Tuesday (27 August) visited the residence of former finance minister Arun Jaitley and met with the family members of the departed leader.

PM Modi also offered floral tributes to the potrait of Jaitley, who passed away on 24 August in the All India Institute of Medical Sciences (AIIMS), New Delhi.

The Prime Minister spent about 20-25 minutes with the family members and spoke to Jaitley’s wife and children.

PM @narendramodi visits the family of late Union Minister and BJP leader #ArunJaitley; pays tribute to him and extend condolences to the bereaved family pic.twitter.com/kDlkUVUZFd

PM Modi was on a three-nation visit when the former finance minister passed away. Following Jaitley’s demise, PM Modi spoke with his wife Sangita and son Rohan to express his condolences on Saturday (24 August).

According to media reports, during talks with both Jaitley’s wife and son, they insisted that PM Modi continues with his scheduled three-nation tour.

The Prime Minister returned to India on early Tuesday (27 August) morning after attending the G7 summit in Biarritz, France.