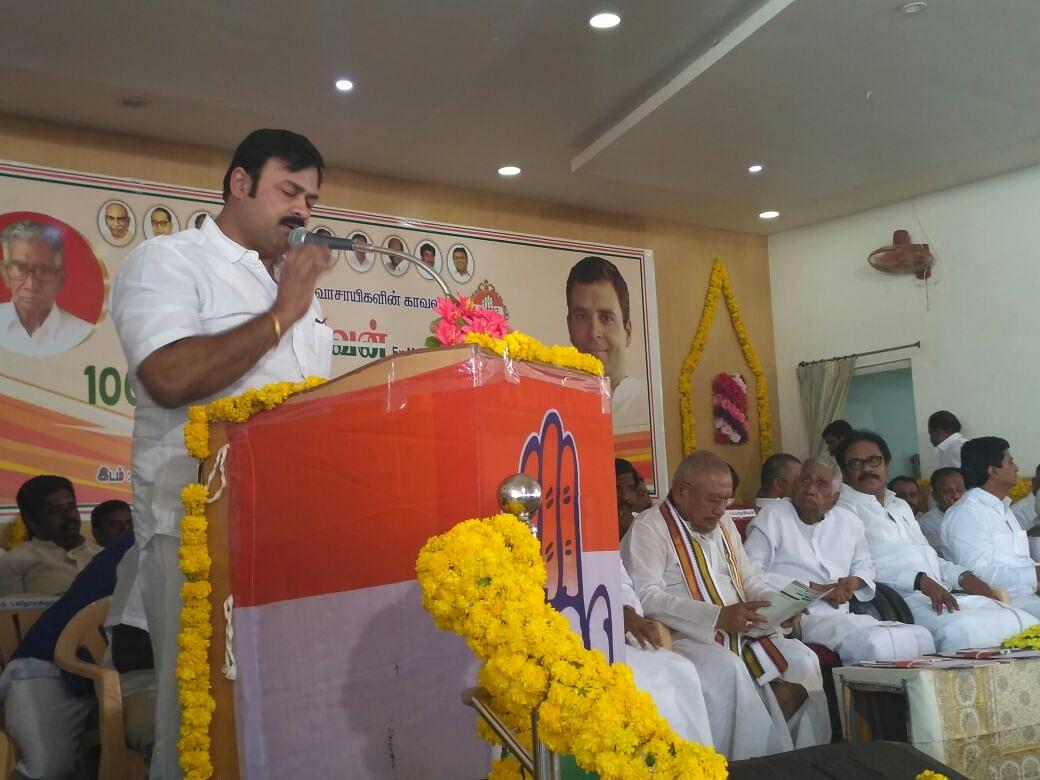 In a sensational development in the Pollachi sexual assault case, the CB-CID has summoned newly appointed working president of Tamil Nadu Congress Mayura Jayakumar as part of investigation into the shocking crime.

Early February, Congress President Rahul Gandhi has appointed Jayakumar as the working president of the party. Jayakumar, who was earlier the state youth Congress chief, was fielded by the party as the candidate from Kovai south assembly seat in 2016 state assembly election. He however was defeated. He is said to be a ticket aspirant for the Lok Sabha elections.

Jayakumar was summoned by investigating agency based on allegations made by the main accused in the case, Thirunavukkarasu.

Jayakumar has been asked to appear before investigating officers 25 March.

During his four-day police custody, Thirunavukkarasu told the CB-CID officers that he was with Mayura Jayakumar on 12 February, the day a college student claimed he was sexually assaulted by him and his friends.

Claiming that he has no connection with the accused in the Pollachi sexual assault case, Jayakumar said that hundreds of people come to meet him in the office and it is likely that Thirunavukkarasu may be one of them .

Jayakumar admitted based on his enquiries with people in Pollachi, the accused’s father Kanakaraj was associated with Congress especially when GK Vasan was the party leader. He added that they may come to greet him

“ I myself don't know his father or Thirunavakarasu personally. In fact, only recently, after this incident, I came to know about them. I haven't met them in my office or house. It was in a big hall where everybody comes and meets me. I am in no way related to this and this is just a defending statement of Thirunavakarasu," he added.

The Pollachi sexual assault case pertains to alleged sexual abuse of more than 50 women in Pollachi by a group of men. Four accused persons in the case - Thirunavukkarasu, Sathish, Sabarirajan and Vasanthakumar - were arrested last month and Goondas Act was slapped against them last week. The incident came to light after one of the victims came forward and lodged a complaint.

Following a huge furore, Pollachi sexual assault case was transferred to the CB-CID 12 March. It was later shifted to the CBI.

Hundreds of college students, lawyers and members of women’s organisations have taken to the streets of Pollachi and other parts of Tamilnadu demanding action against the accused. Students have been boycotting classes and staging sit-ins demanding stringent punishment. Some institution have suspended classes for the day fearing violence.

The Madurai Bench of the Madras high court had recently ordered the Tamilnadu government and the police department to pay a compensation of at least Rs 25 lakh to the Pollachi case victim for revealing her identity.

The Coimbatore police and later the state home secretary in his G.O. transferring the investigation to the CBI had mentioned the details of the victim, which the court termed as “violation of privacy, dignity and image”. The government was asked to withdraw the GO transferring the case to CBI and was also directed to issue a fresh order deleting details of the victim.

The Madurai bench of the Madras High Court had also directed the Central government to remove videos related to Pollachi serial sexual assault case from the internet. Also, it wanted the Tamilnadu government to issue a fresh order for CBI probe.