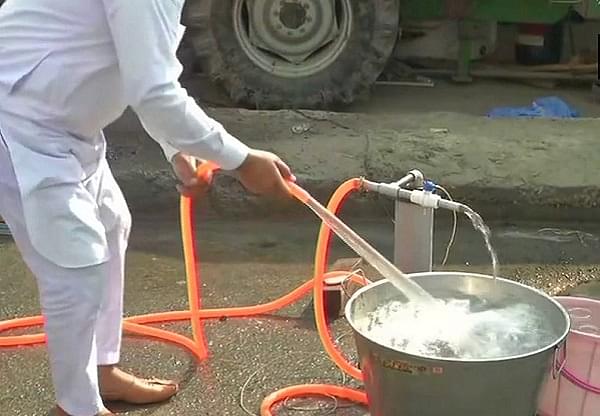 A borewell in use at the farmers' protest site (ANI)

As the country braces to face the summer heat, the protesting farmers around Delhi are preparing themselves for the hot weather.

The protesting farmers at the Tikri Border in West Delhi have now installed fridges, fans and even drilled borewells at the protest site.

Borewell drilled; fridges, fans installed at Tikri border in preparation for the summer season. Farmers have been protesting here since late last year against the farm laws

The rebel farmers have rolled out several amenities at the protest sites over the course from December, 2020. Back then, pictures of the protesters relaxing in massage chairs went viral across the internet.

Similarly, people were seen baking pizzas in viral pictures. Even a makeshift gym was set up at Singh on 17 December as protesters claimed that working out is a part of their daily routine.

Meanwhile, the ongoing farmers’ protests have nearly completed three months and common citizens continue to face major connectivity issues around the borders of the national capital.

The dissidents have still blocked the Singhu, Ghazipur and Tikri border sites, which has compelled the police to divert vehicles and cause traffic congestion in certain parts of the city amidst peak hours.