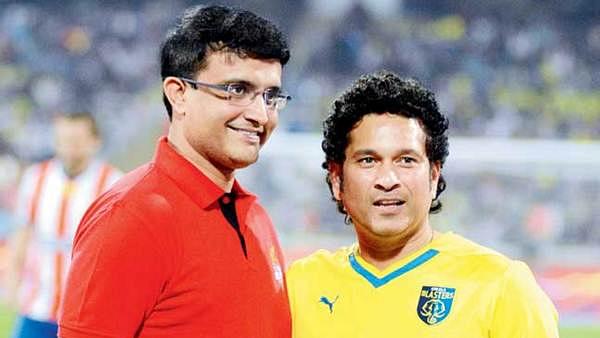 Ganguly and Tendulkar (Image Via crictracker.in)

Moments after being selected as the new Board of Control for Cricket in India (BCCI) President, Sourav Ganguly had promised to make a mark in whatever time he gets in the hot seat. Having already managed to walk the talk and organise India’s first Day-Night Test match, he has now supposedly approached his former opening partner and cricket legend Sachin Tendulkar to groom the next generation of stars.

Speaking to IANS, sources in the know of developments said that while the whole process is still in the nascent stage, the former India skipper is keen to get Tendulkar to work with youngsters and groom them into champion players.

"The process has been started, but it is too early to make statements on the progress or how things stand. But, if all goes as per plan, you could see the likes of Shubman Gill or Rishabh Pant or Prithvi Shaw spending quality time with the legend and discussing not just their cricketing skills, but also the mental side of the game. Who better than the man who played international cricket for 24 years to share his experience with the new kids on the block? This would indeed be another masterstroke keeping in mind the future of Indian cricket," the source said.

Asked if it would be like Tendulkar visiting the National Cricket Academy (NCA) or how exactly the sessions would be planned, the source said that will need to be looked into keeping in mind the Conflict of Interest clause of the newly registered BCCI Constitution.

"That will have to be done in a way that while the kids can pick on the brain of one of the best to have played the game, there is also no issue of conflict whatsoever as far as Tendulkar is concerned. These things will need to be worked out," the source pointed.

After taking over as BCCI chief, Ganguly had made it clear that he wanted to use the services of the legends of Indian cricket to help the future stars. In fact, since the conflict clause is a hindrance in this, he made it clear that needs to be looked into immediately.

"Conflict is an issue whether you will actually get the best cricketers in the system. You are not too sure as they will have other options and if they come into this system and not get to do something which is their livelihood, then it gets difficult to be part of the system. It needs to be looked into.

"If you look at all the appointments that have happened in various forms -- whether it is the NCA or CAC or the appointment of batting, fielding coaches, there has been issue with everything. Then come to commentators or IPL. This needs to be sorted as it is another very serious issue in Indian cricket," he had said.

In fact, former teammate and NCA head Rahul Dravid has been asked to depose before the Ethics Officer on 12 November in the matter where there are allegations of conflict against the former India captain.