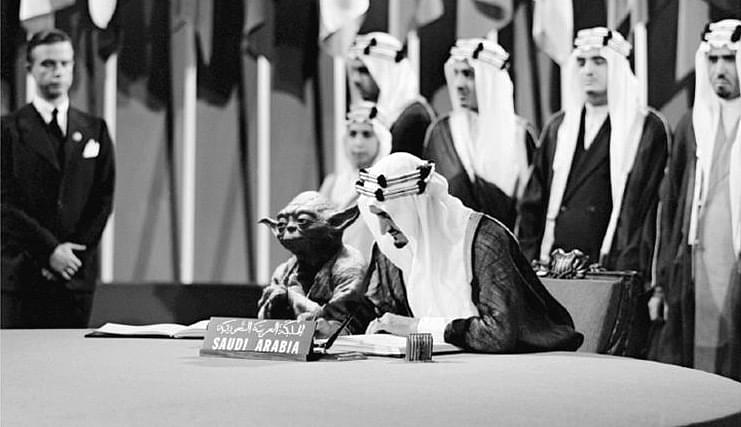 Image created by a Saudi artist as homage to King Faisal.

It seems like the ‘Force’ was with the high school students in Saudi Arabia.

According to The New York Times, in a chapter about United Nations, a photograph of King Faisal was seen to be standing right next to Yoda, the Jedi master from the “Star Wars” films. Even the Saudi artist, who created the image, had any idea how the image got into the text book.

“I am the one who designed it, but I am not the one who put it in the book,” said Abdullah Al Shehri, the artist who drew the picture.

The image was part of a series in which Shehri, who is 26 and goes by the nickname Shaweesh, mixes pop culture icons into historic photographs.

He told that he got the idea while looking through photo archives from the Middle East.

He said, “All the pictures were very sad, you know, refugees and war.”

While browsing the archives, he found a photo - a black-and-white image of King Faisal, who was a prince and serving as foreign minister at the time - signing the United Nations Charter in San Francisco in 1945.

And as to why he thought of Yoda, he said like the king, the Jedi master was known for his intelligence.

Shehri noted, “He was wise and was always strong in his speeches. So I found that Yoda was the closest character to the king. And also Yoda and his light saber – it’s all green.”

It remains unclear how his image had ended up in a high school social studies book.

On Thursday, Ahmed al-Eissa, the Saudi education minister, apologised on Twitter for the “unintended mistake.”

He wrote, “The ministry has begun printing a corrected copy of the curriculum and withdrawing the previous copy and formed a legal committee to determine the source of the error and to take the proper measures.” (ANI)