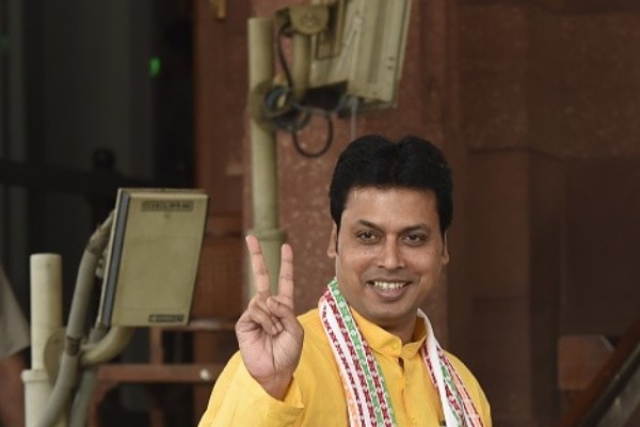 The ruling BJP-IPFT government in Tripura has started a two-day Chintan Shibir (Thought Camp) at Agartala to prepare a roadmap for the development of the state along with Niti Ayog ahead of the planning body’s next meeting, reports The New Indian Express.

Tripura Chief Minister Biplab Deb talked about the necessities of the state and its potential in areas like development of the private sector, rural development and connectivity among other issues.

The Chief Minister also stressed on the development of panchayats and villages to ensure overall progress and added that the panchayat secretaries should be empowered to resolve local issues of law and order and domestic problems alike.

“Ask panchayat secretary to bring a list of achievements in sanitation, PMAY, PMGSY, PMUY, Saubhagya Yojana and other issues. The country can’t be developed unless villages are developed,” Deb told officials from different departments of the state government who joined the camp on Friday (October 02).

“All updated panchayat data should be there in the computers. National highways, state highways, roads built by rural development department, PMGSY and other roads all go through panchayats,” the Chief Minister added, while asking Chief Secretary LK Gupta to prepare a separate resolution empowering panchayat secretaries to initiate repair works for roads.

The Chief Secretary placed a roadmap for the development of the state for discussion before taking it to Niti Ayog.

On the proposal, Deb said, “I can speak of many things about the state without reading. This is because I have been trying to understand Tripura for the last eight months and from even before that. I can say from my experience gained in the last eight months that Tripura can’t wake up unless the panchayats do.”