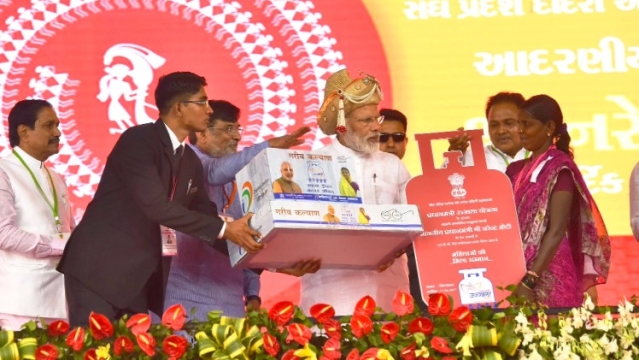 PM Modi handing over a gas connection. (pic via Twitter)

Prime Minister Narendra Modi’s pet project, the Ujjwala Yojana, through which the government has been providing poor households LPG connections free of cost, is all set to beat the connections target by eight months, Times of India has reported.

Lok Sabha Speaker Sumitra Mahajan is expected to hand over ‘Ujjwala Connection Number 5 Crore’ to the beneficiary in presence of Union Minister Dharmendra Pradhan at a function in the Parliament.

The scheme provides free LPG connections to poor households identified through Socio-Economic Caste Census (SECC). After seeing enormous success of the scheme, the government has enhanced the target to 8 crore LPG connections by 2020 with
the 2018 budget allocating Rs 4,800 crores for the scheme. The scheme was launched on 1 May, 2016 from Ballia, Uttar Pradesh by the Prime Minister.

The scheme has seen considerable success in providing smoke-free cooking environment to poor households many of which earlier had to rely on dung cakes, firewood, coal among others as fuel.