UP Police Deploys Over 150 Personnel, Ensures Dalit Groom’s Baraat In Kasganj Is Free Of Untoward Incidents 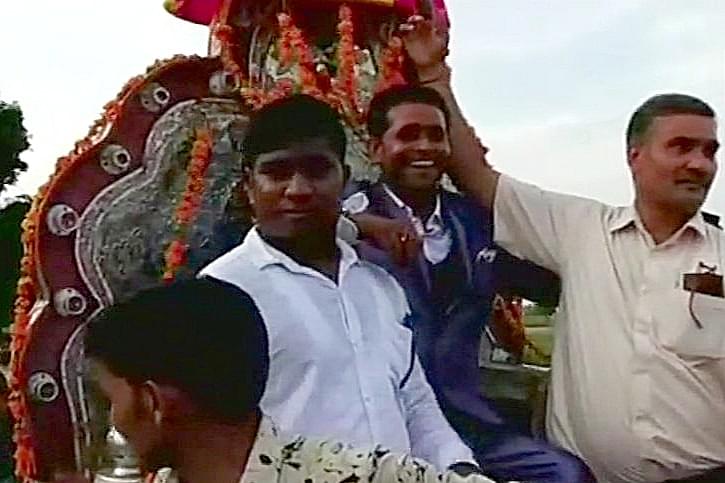 Visuals from the Baraat. (piv via ANI UP/Twitter)

History was made when a Dalit groom, for the first time in 80 years, took out his wedding procession without any disturbances in a village in Kasganj district of Uttar Pradesh, DNA has reported. Defying caste prejudices, the groom Sanjay Jatav, a native of Hathras district took out Baraat in the Thakur dominated village of Nizampur, in presence of over 150 policemen.

There have been tensions for over past six months, as Thakur community had allegedly threatened to disrupt Jatav’s wedding.

"Upper caste people in the village said that this has never happened and threatened to attack us. We are less scared as we have got police protection," the bride Sheetal was quoted to have said to ANI.

There was no problem when the procession was being carried out. We have deployed sufficient force till the wedding ends. Our personnel will be alert in the village even after the wedding so that any unforeseen situation can be avoided: Pavitra Mohan Tripathi, Additional SP pic.twitter.com/TJaDkLZR6b

Over 150 police personnel, including Provincial Armed Constabulary (PAC) were deployed in the village to ensure no untoward incident took place during the procession.

According to the district administration, the police received the groom and the bride at the Kasganj-Hathras border. They were escorted with an unprecedented security cover. Times of India has reported that metal detectors were also placed to frisk the guests who attended the wedding. Hence, the wedding procession concluded peacefully.